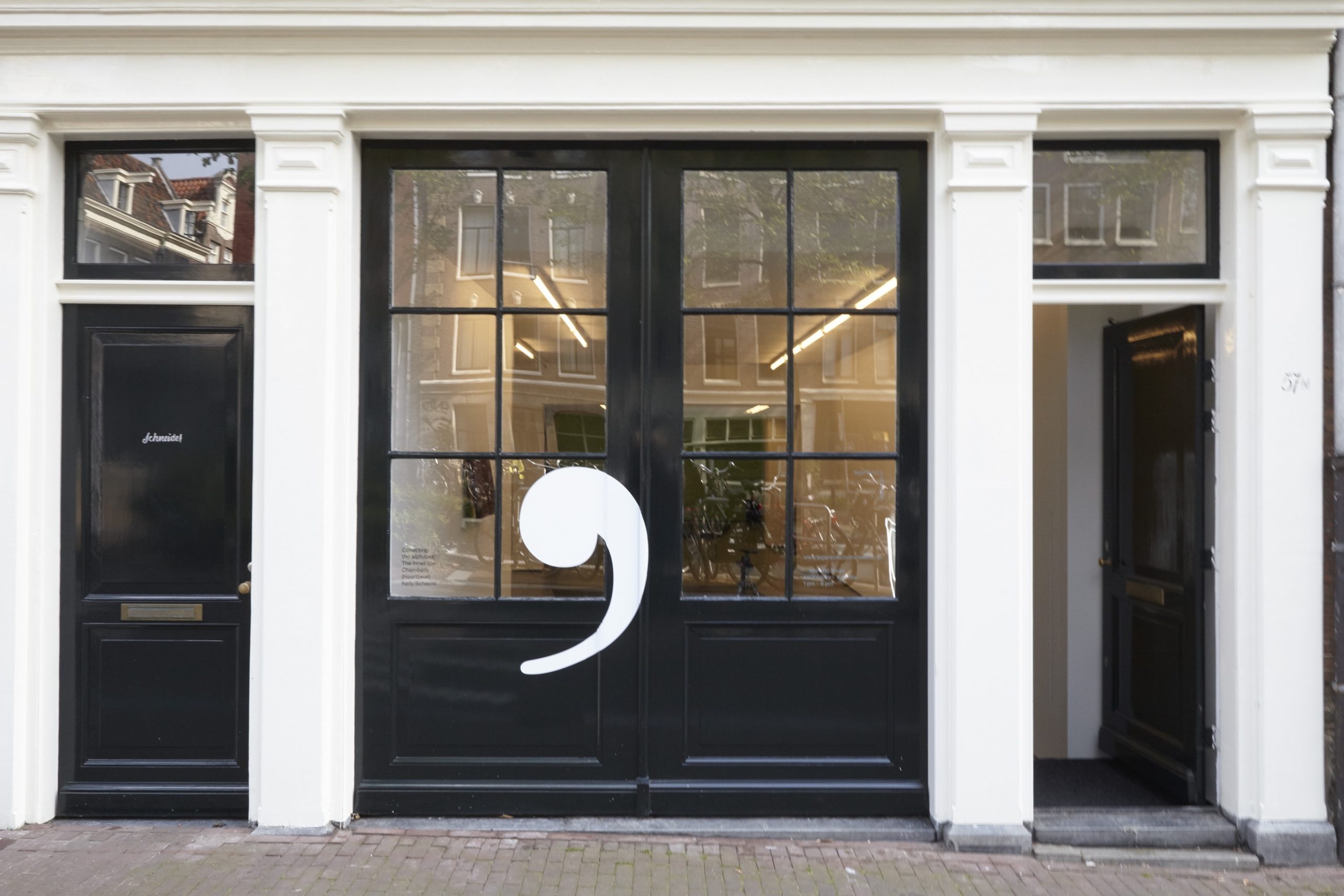 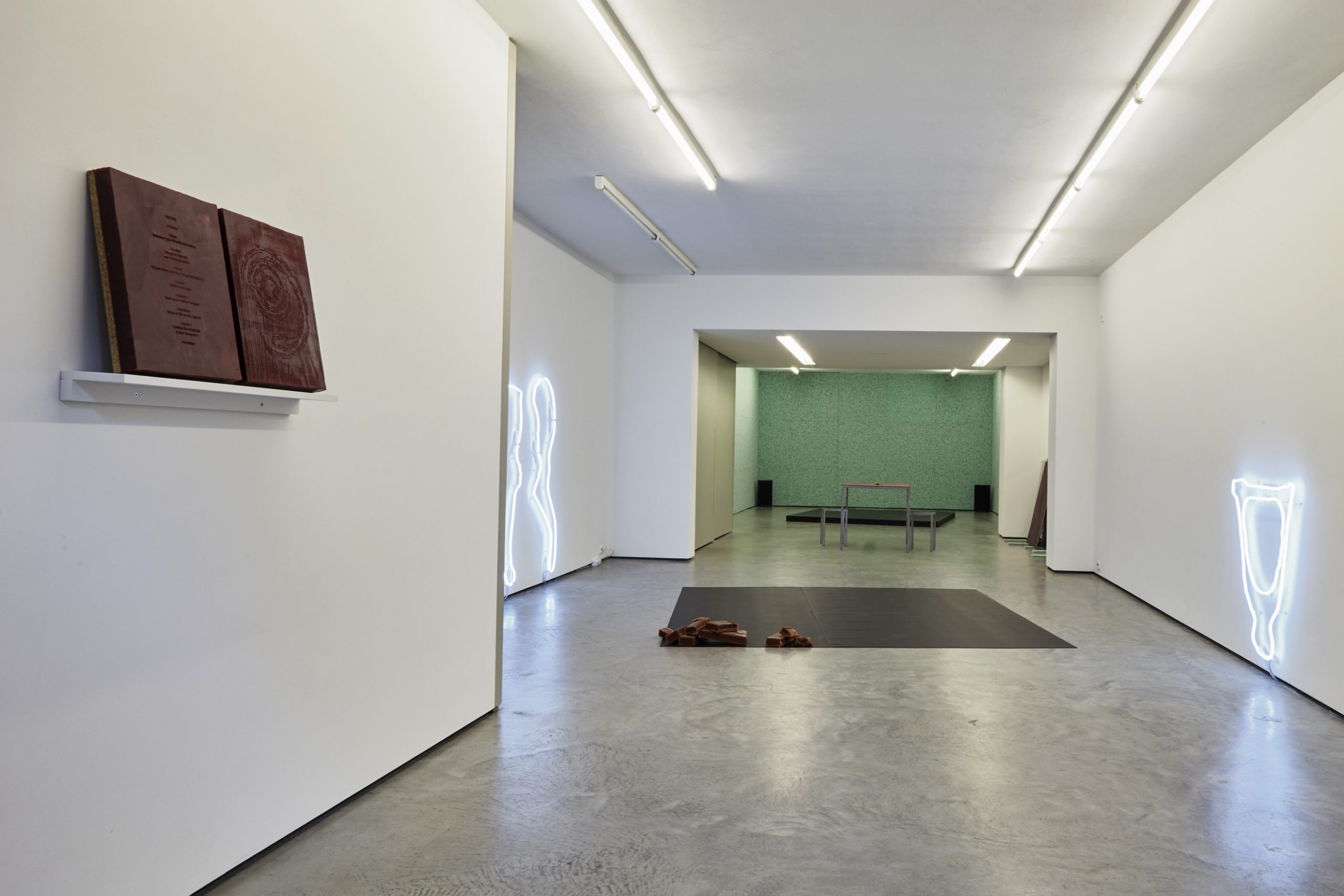 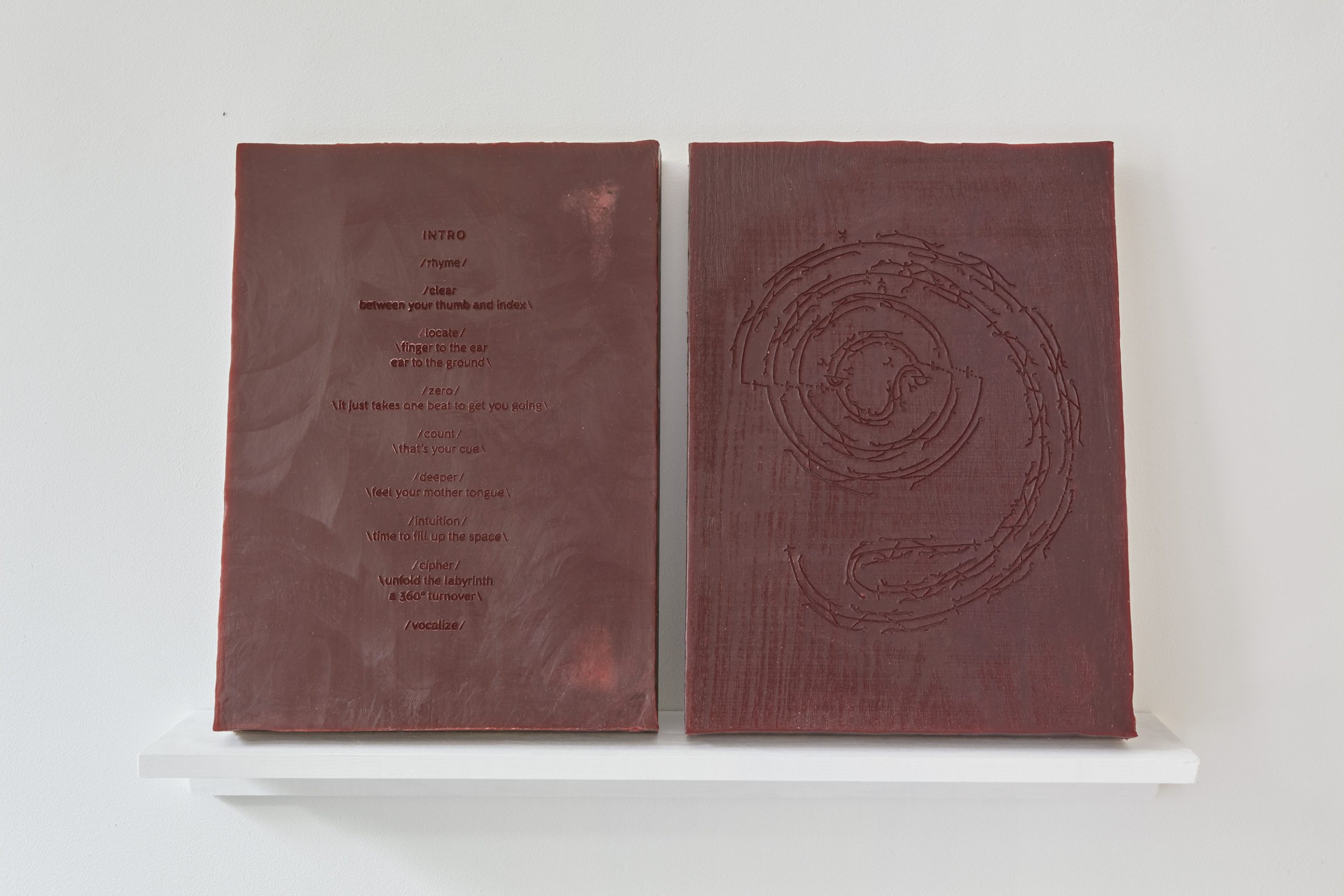 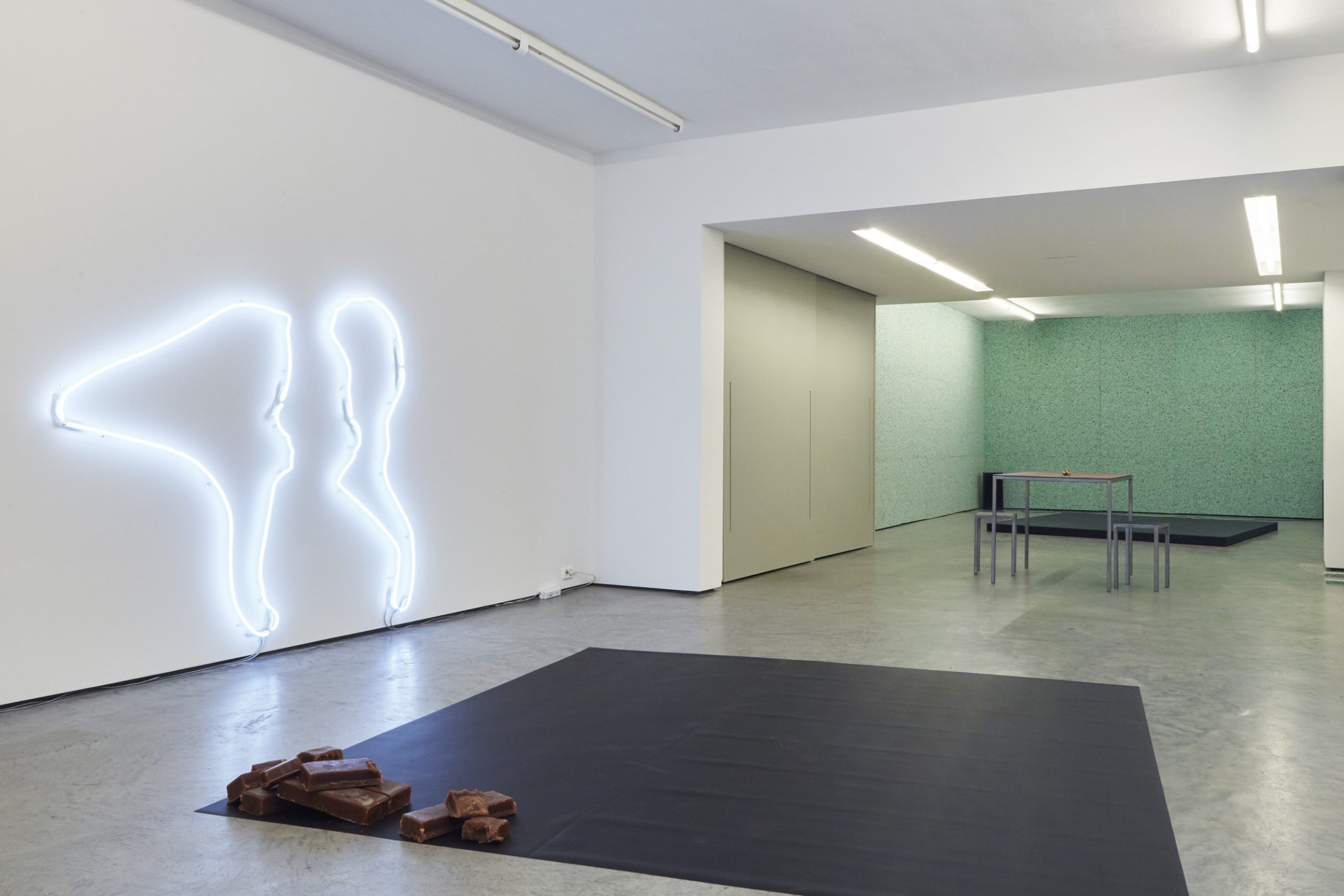 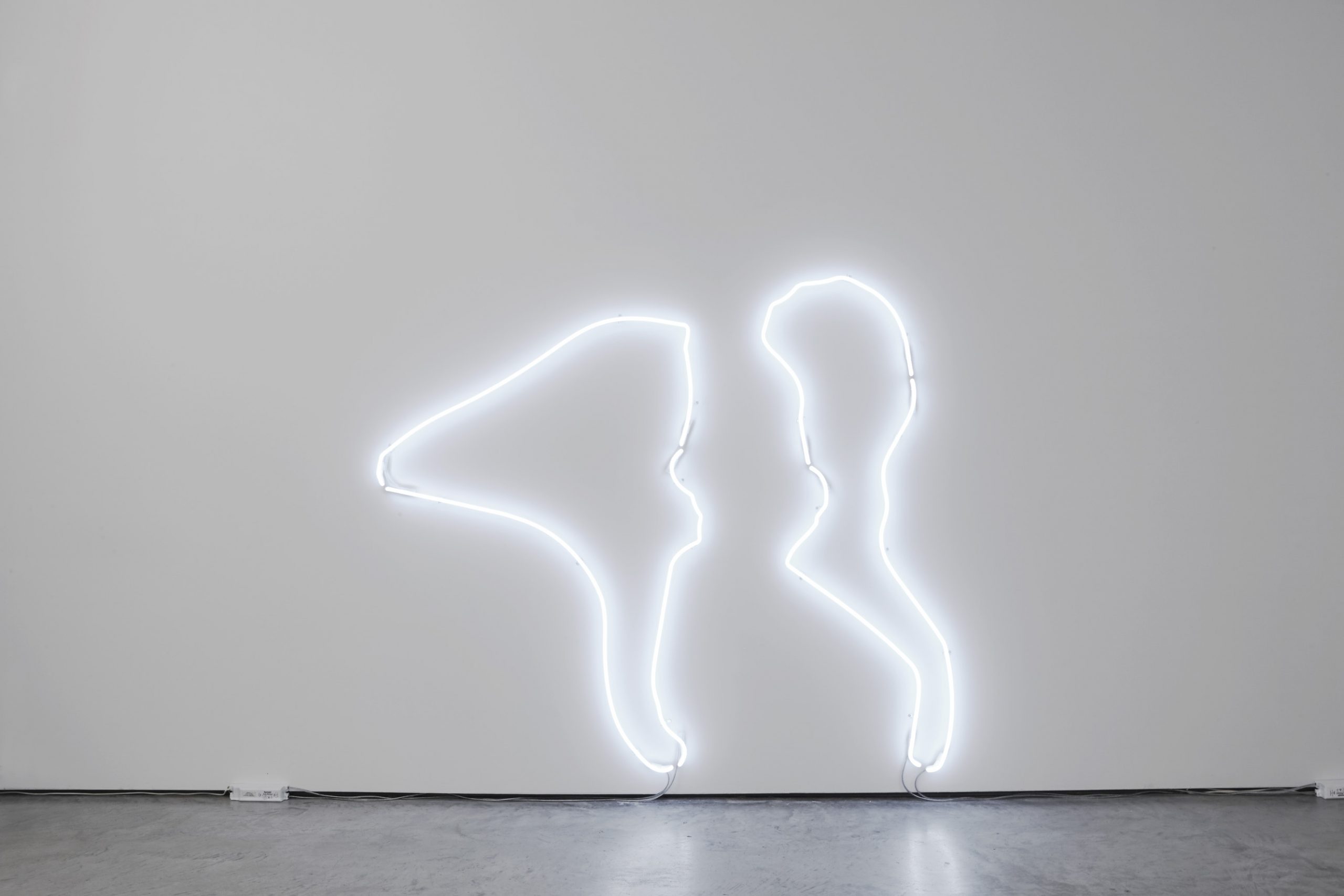 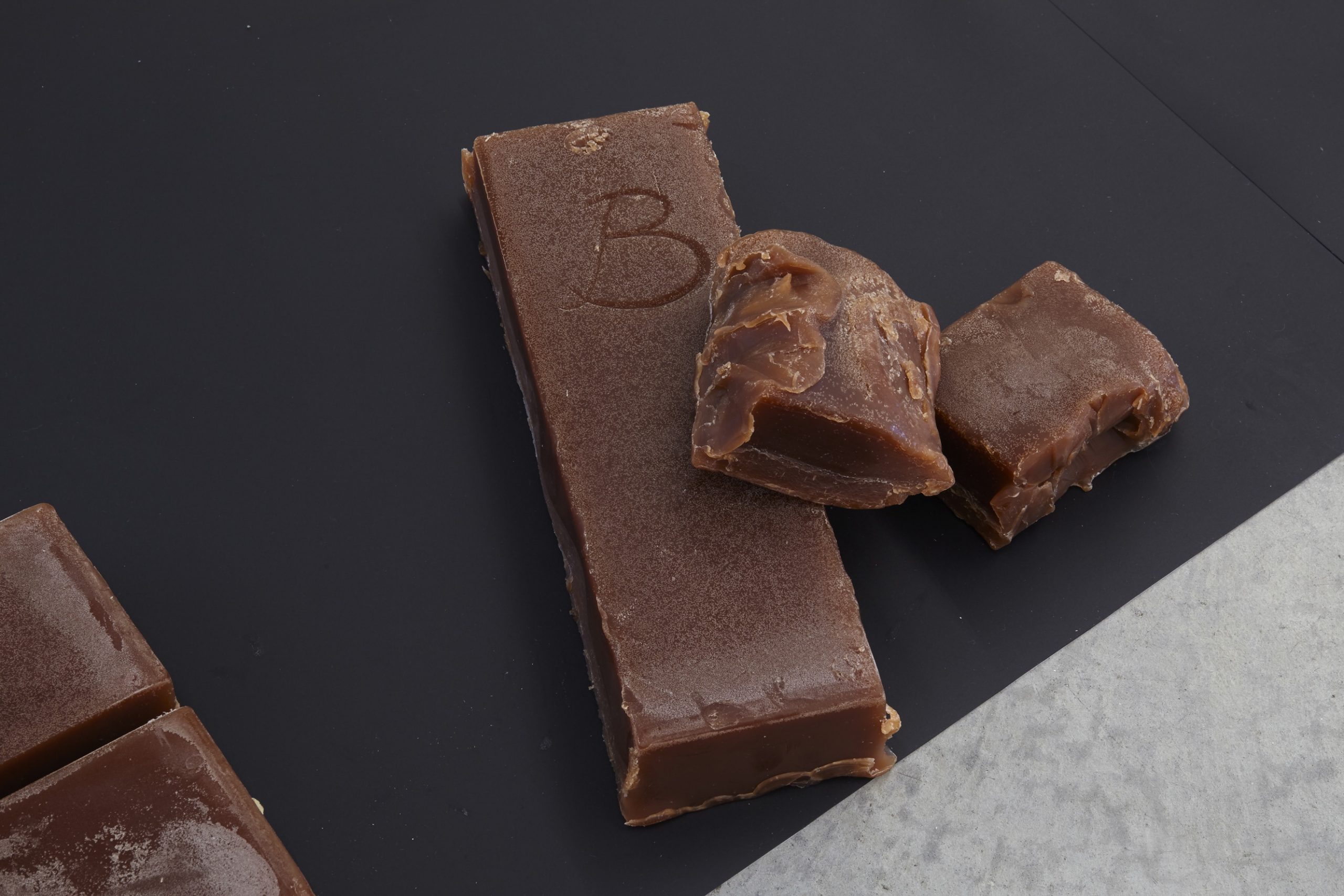 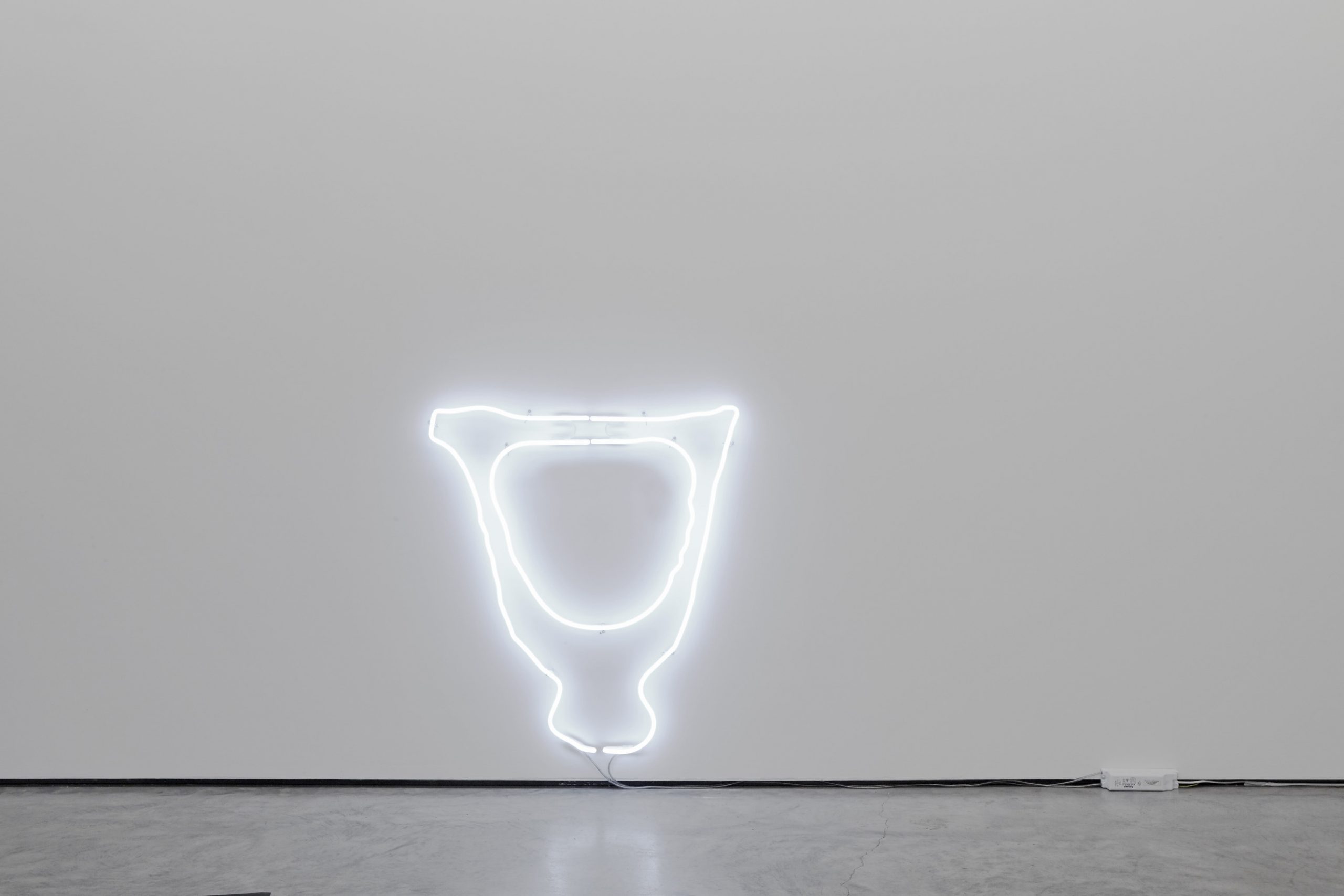 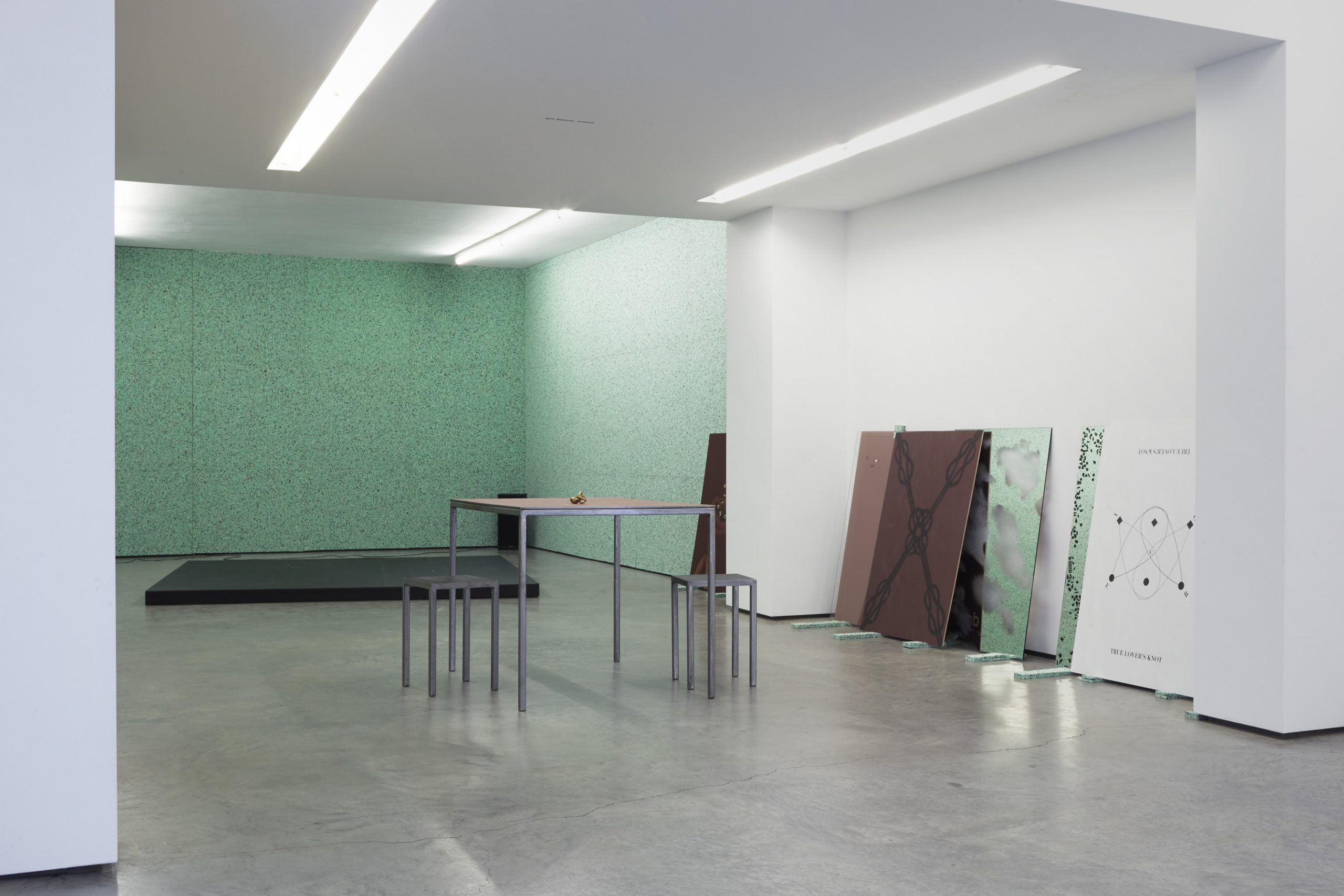 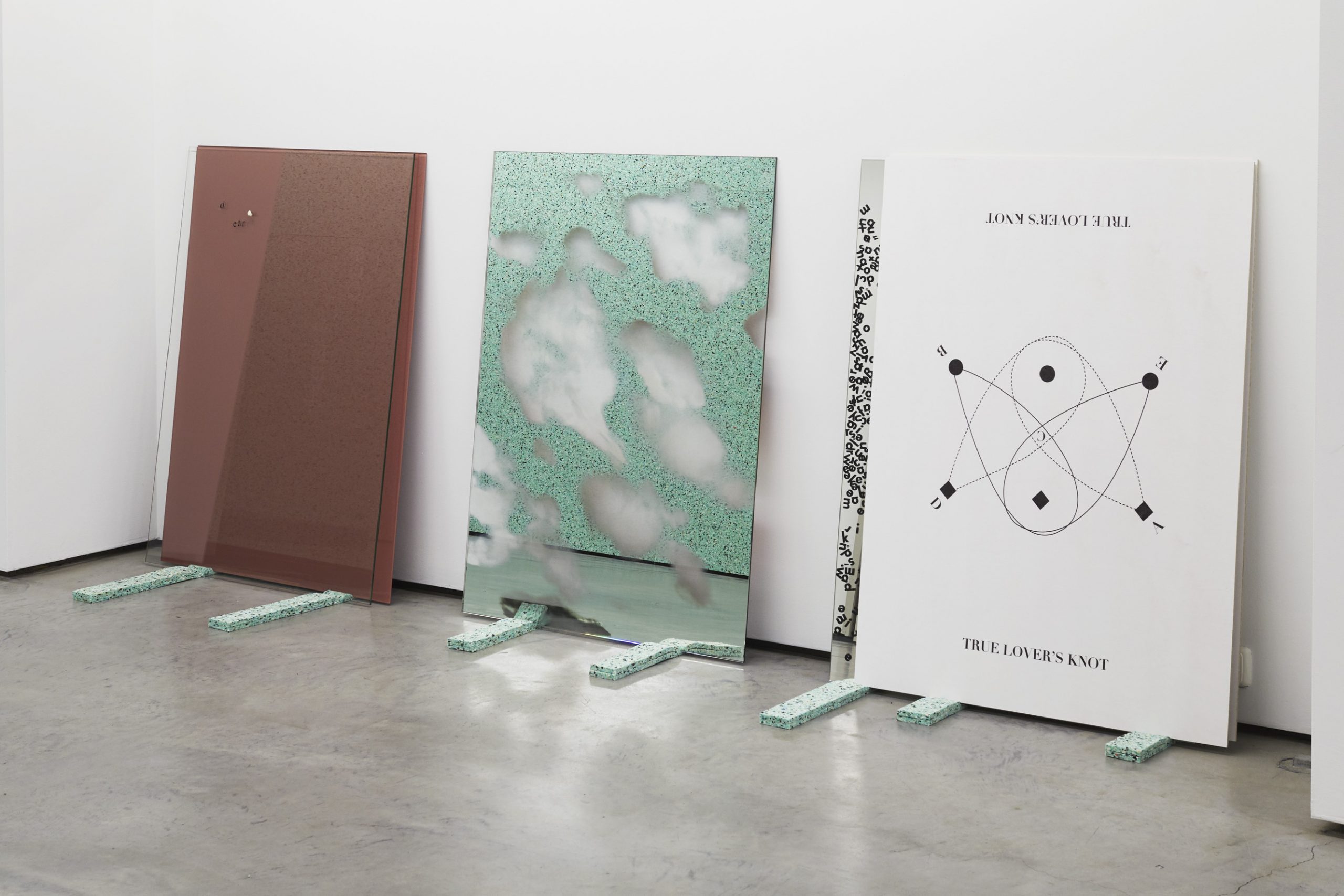 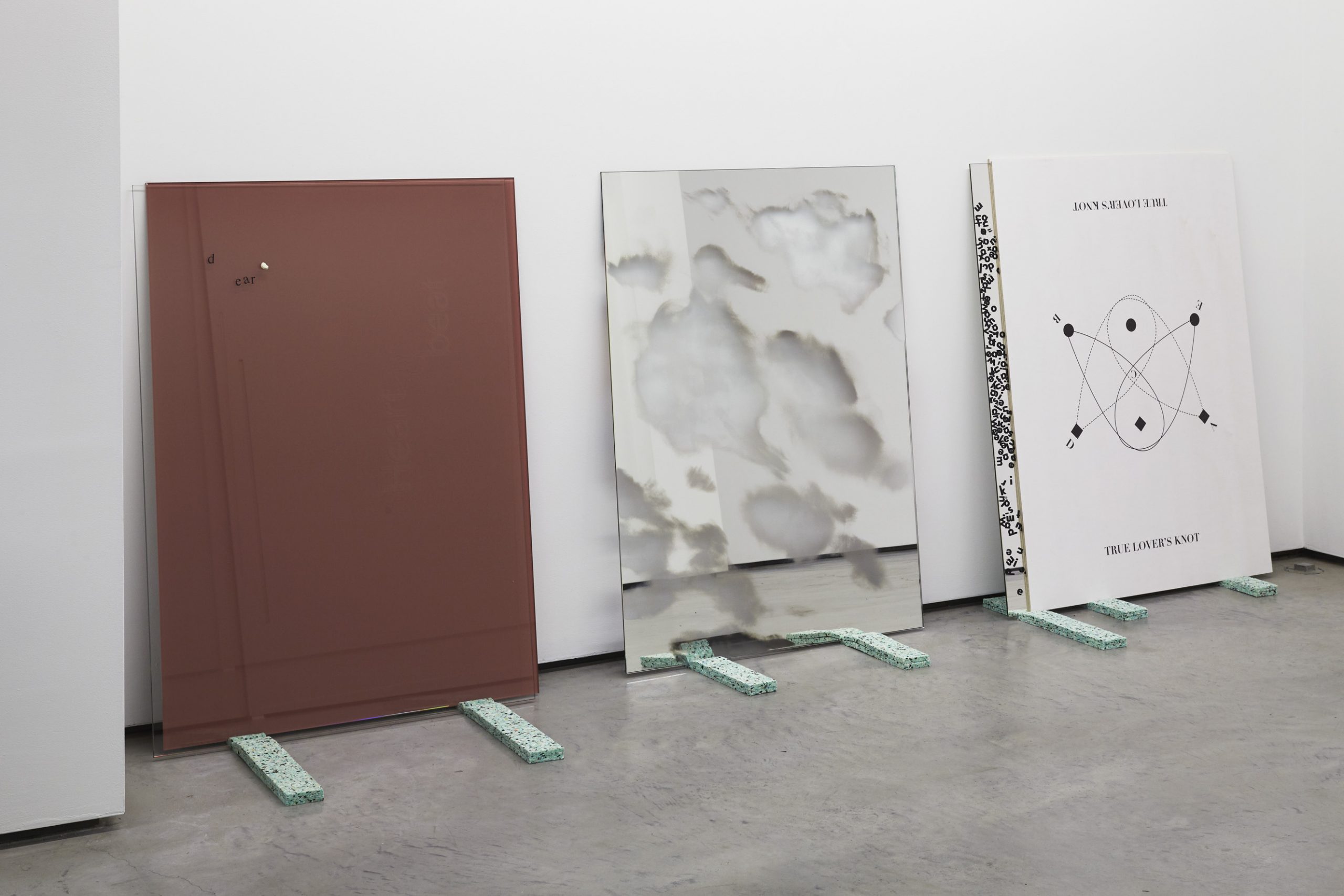 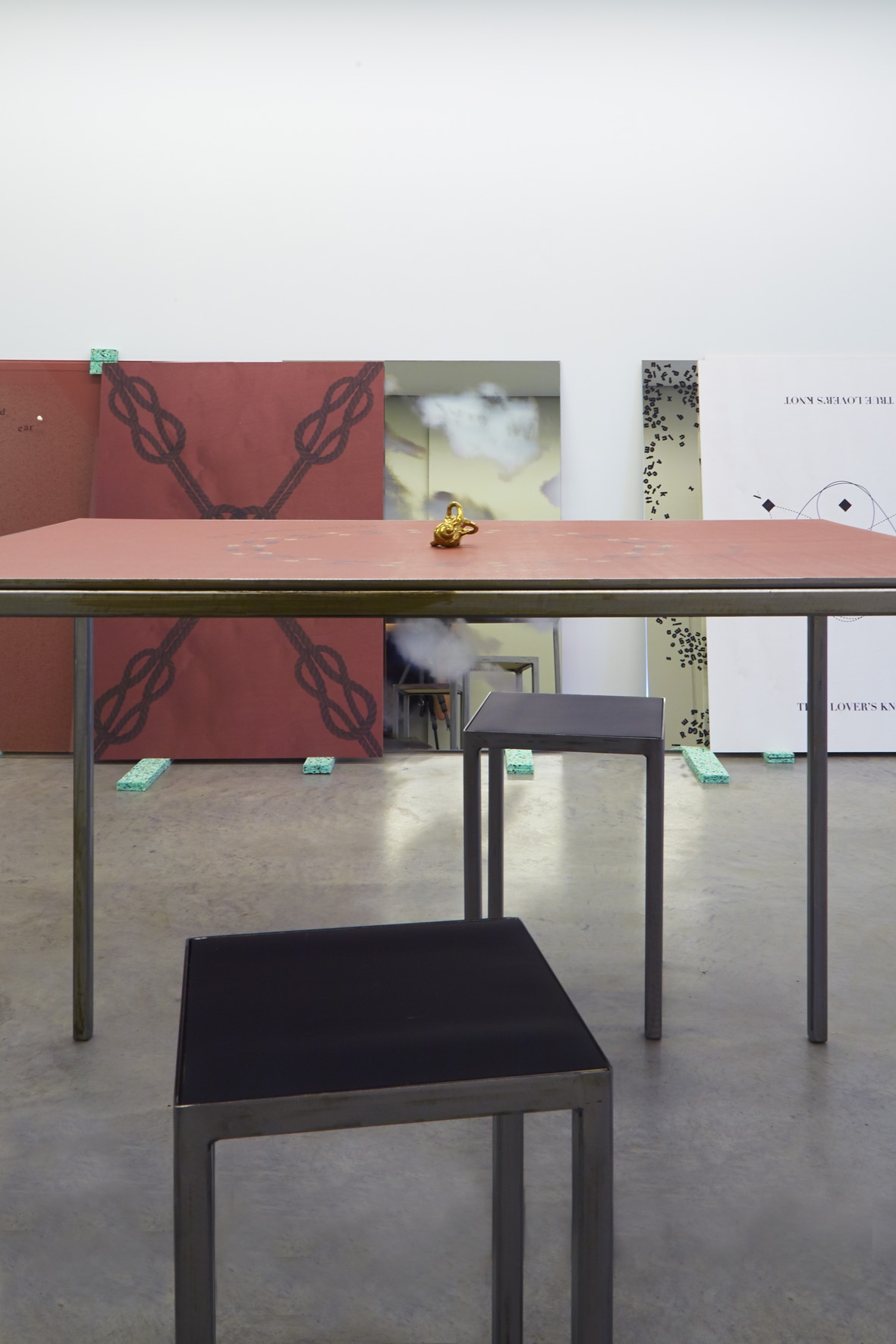 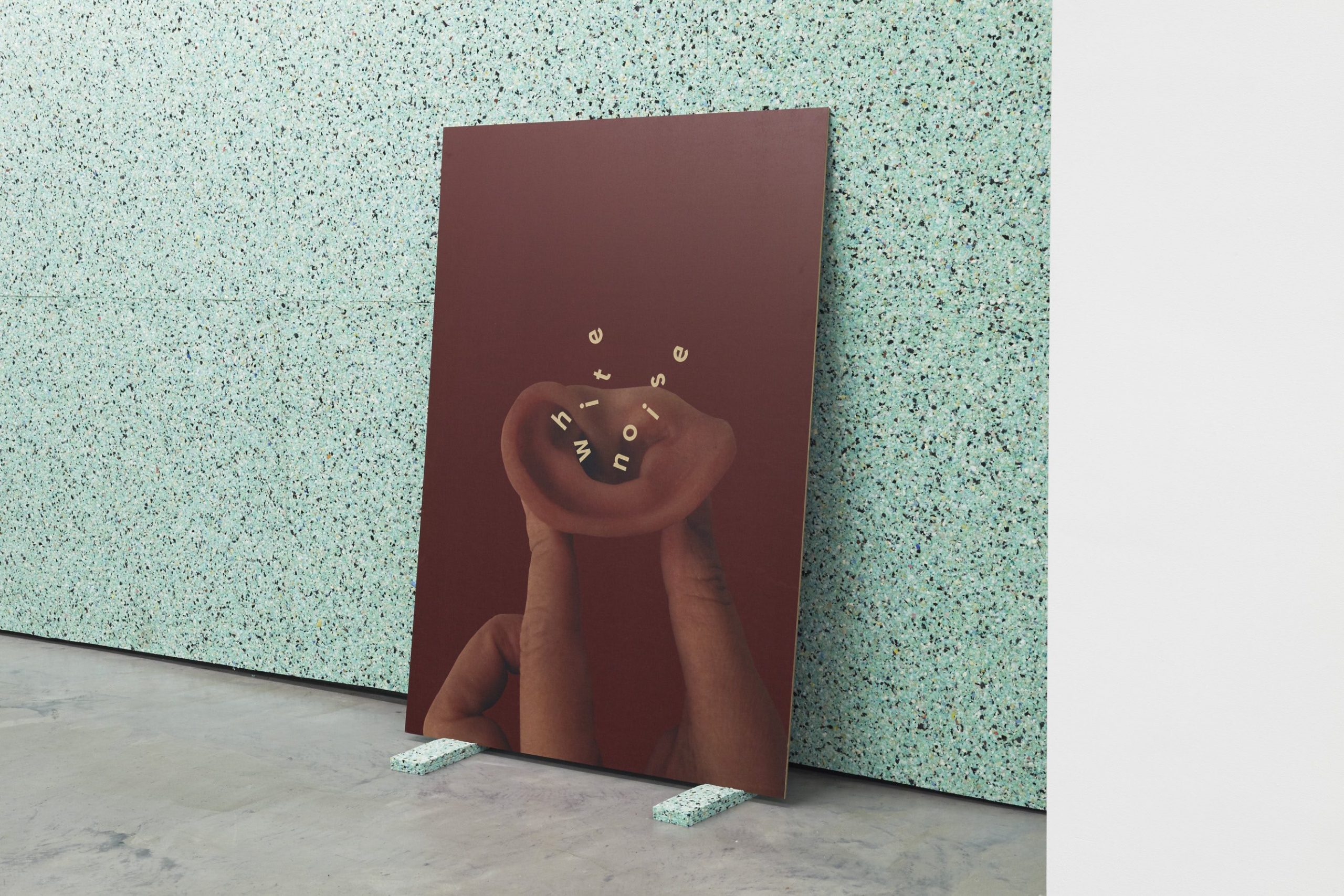 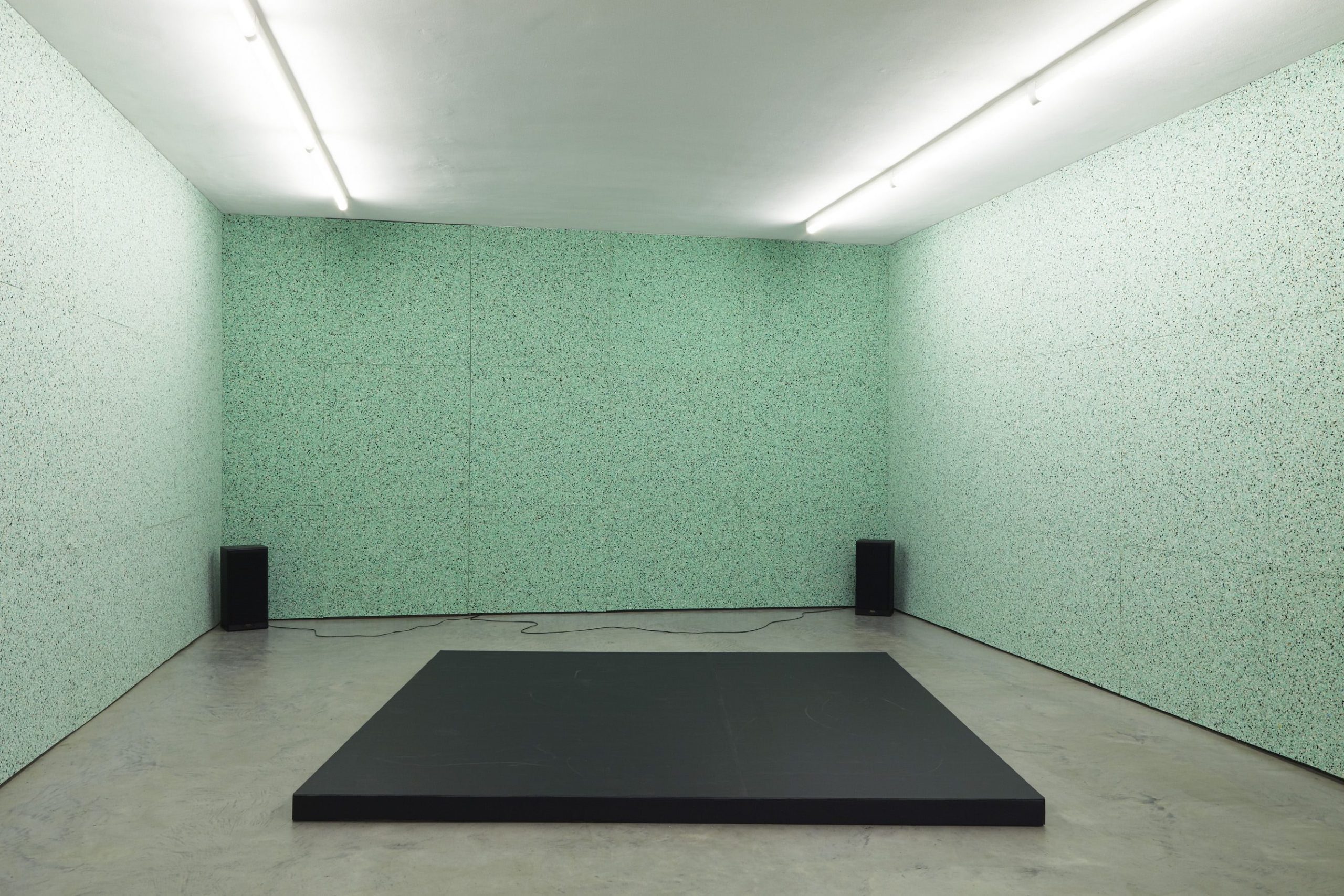 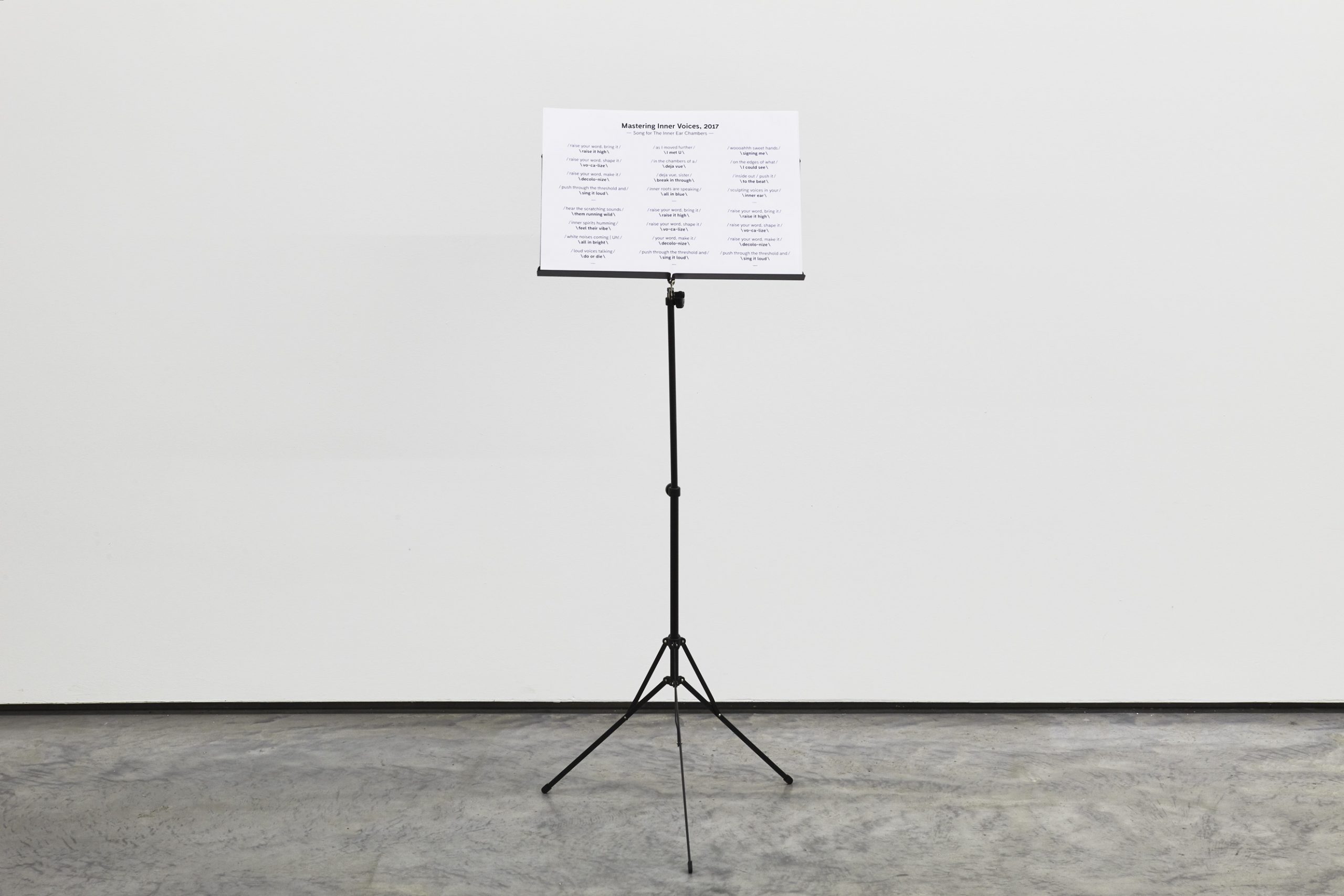 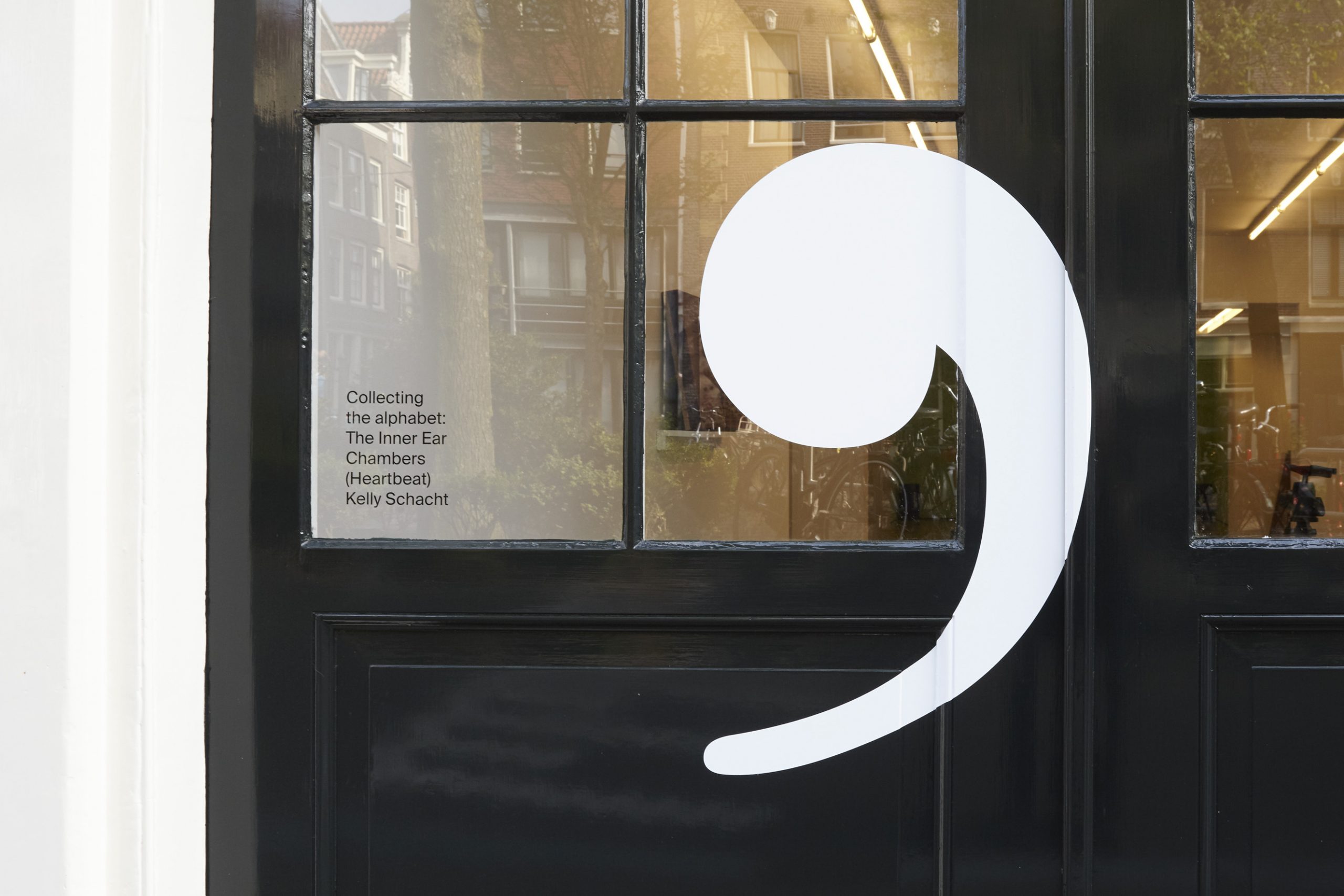 Imagine being on a journey: arriving in a landscape of wax tablets, dance floors, neon light, tables that function as tuning forks, reflecting plates covered with printed images, texts on tabletops, a small bronze sculpture, sound-resistant walls, a platform and sound. Welcome: you have entered The Inner Ear Chambers of Kelly Schacht.

Kelly Schacht’s solo exhibition at tegenboschvanvreden portrays a movement inward: the journey leads to the labyrinth of the ear – The Inner Ear Chambers. That labyrinth is, in fact, an interim space, a turning point, a place where anything is possible, where transformation can occur. That labyrinth of the inner ear has expanded, as it were, and lodged itself in the gallery’s three spaces. Schacht employs images, texts and sound: among her inspirations are the (visual) language of breakdancing and the battles in which dancers and audiences come together and create a single ‘narrative’. The Inner Ear Chambers invites us to discover our own voice: the perfect instrument for entering into that dialogue with the other.

The exhibition culminates, so to speak, in a ‘soundscape’ involving a song for which Schacht wrote lyrics repeated in the form of ‘call and response’, as is done in historical work songs and old songs sung by prisoners and slaves. In those songs, the voice was the only free ‘place’ and, at the same time, a means of protest. The text of the soundscape gives a subtle political, or rather emancipating, twist to the exhibition: ‘raise your word, bring it’ \ / ‘raise it high’ \ / ‘raise your word, shape it’ \ / ‘vo-ca-lize’ \ / ‘raise your word, make it’ \ / ‘decolo-nize’ \ / ‘push through the threshold and’ \ /  ‘sing it loud’.  Kelly Schacht’s installation  is a space in which the path to the inner voice is staged like dances and battles (hence the dance floor): where the (multiple) individual meets the other, in every possible guise. To the beat of the heart.

At tegenboschvanvreden, Kelly Schacht has added a fourth chapter to a series of exhibitions titled Collecting the Alphabet. For Schacht the idea of compiling her own abecedary (alphabet primer) began when she came into contact with that of the philosopher Deleuze. Schacht is fascinated with the last three letters, or rather with Deleuze’s concepts: X – the unknown, Y – the untold and Z – the zigzag that both avoids and interconnects everything. Her abecedary revolves around learning to speak in ‘the plural’: the artist is like a nomad, journeying past endless possibilities, always in transit, always undergoing change, never pinned down.

The Belgian multimedia artist Kelly Schacht (1983, Roeselare) studied at the KASK (Koninklijke Academie voor Schone Kunsten), in the department ‘Vrije Kunsten’ (sculpture/installations) in Ghent. In the Netherlands her work has been shown in solo presentations at venues such as De Vleeshal in Middelburg (2011), A Tale of a Tub (2014), and de Brakke Grond in Amsterdam (2015). In Belgium she has had solo exhibitions at, among other institutions, the Paleis voor Schone Kunsten – BOZAR in Brussels (2007), Museum Dhondt-Dhaenens in Deurle (2008), and KIOSK in Ghent (2013). Her work is represented in international collections, both public and private.