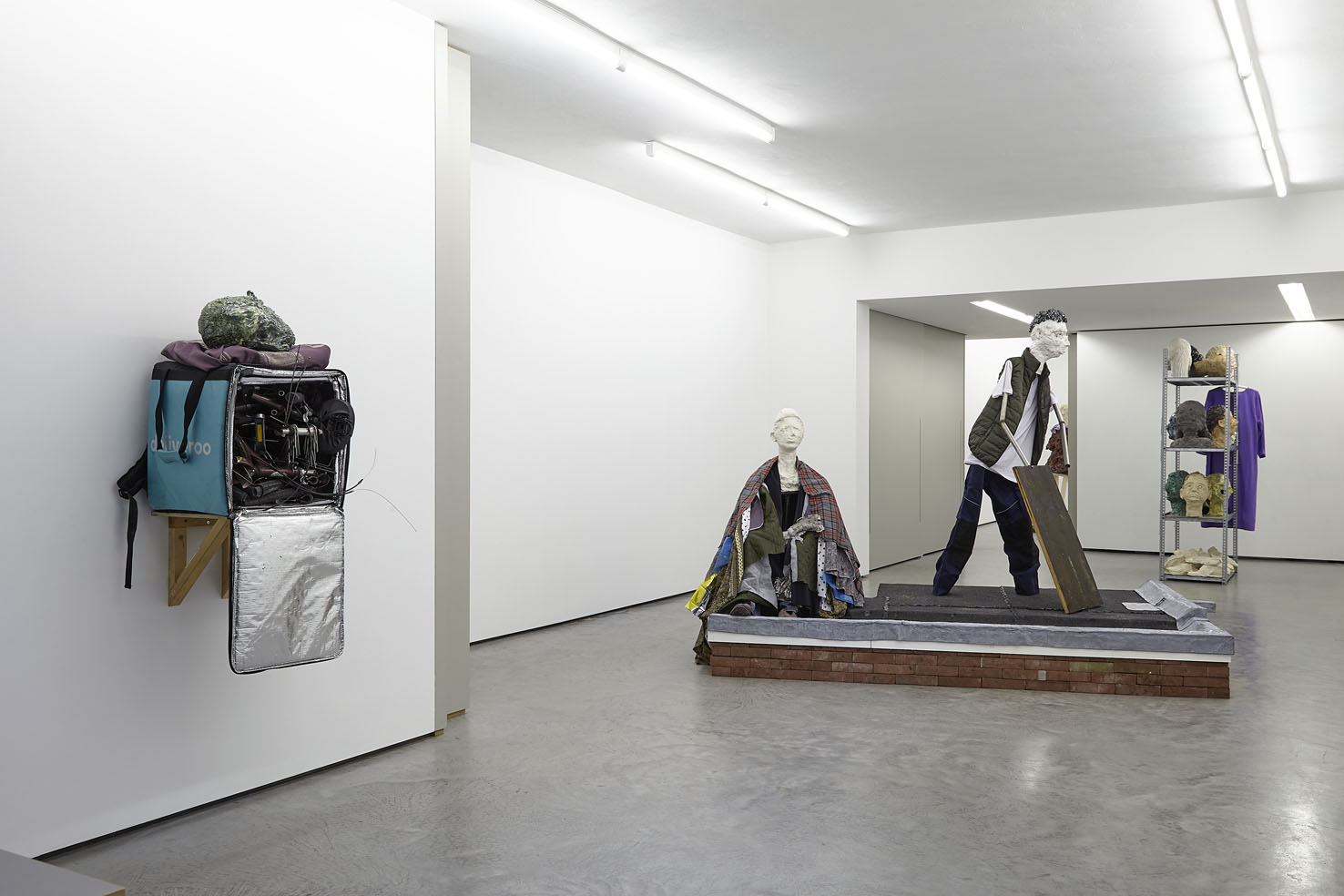 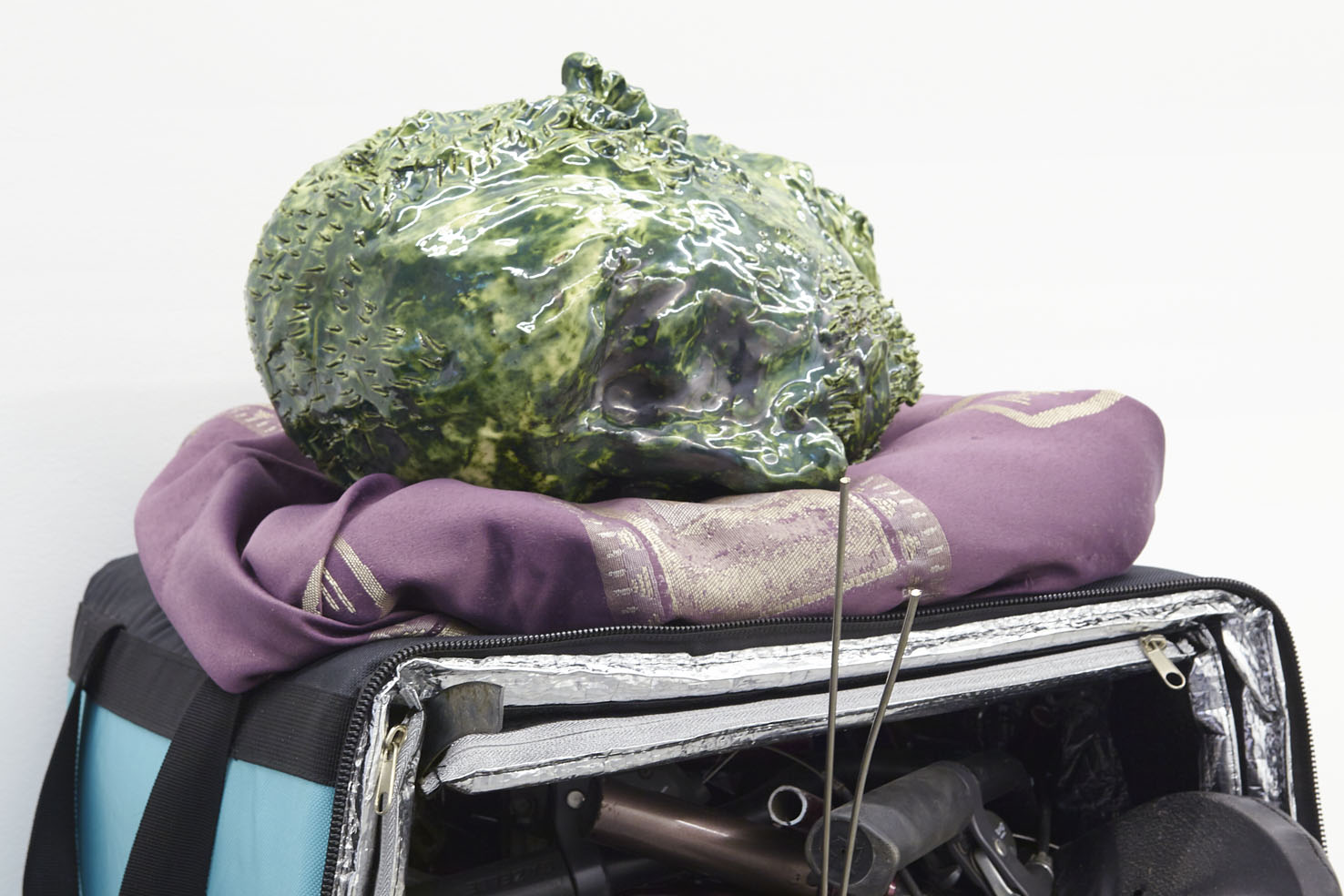 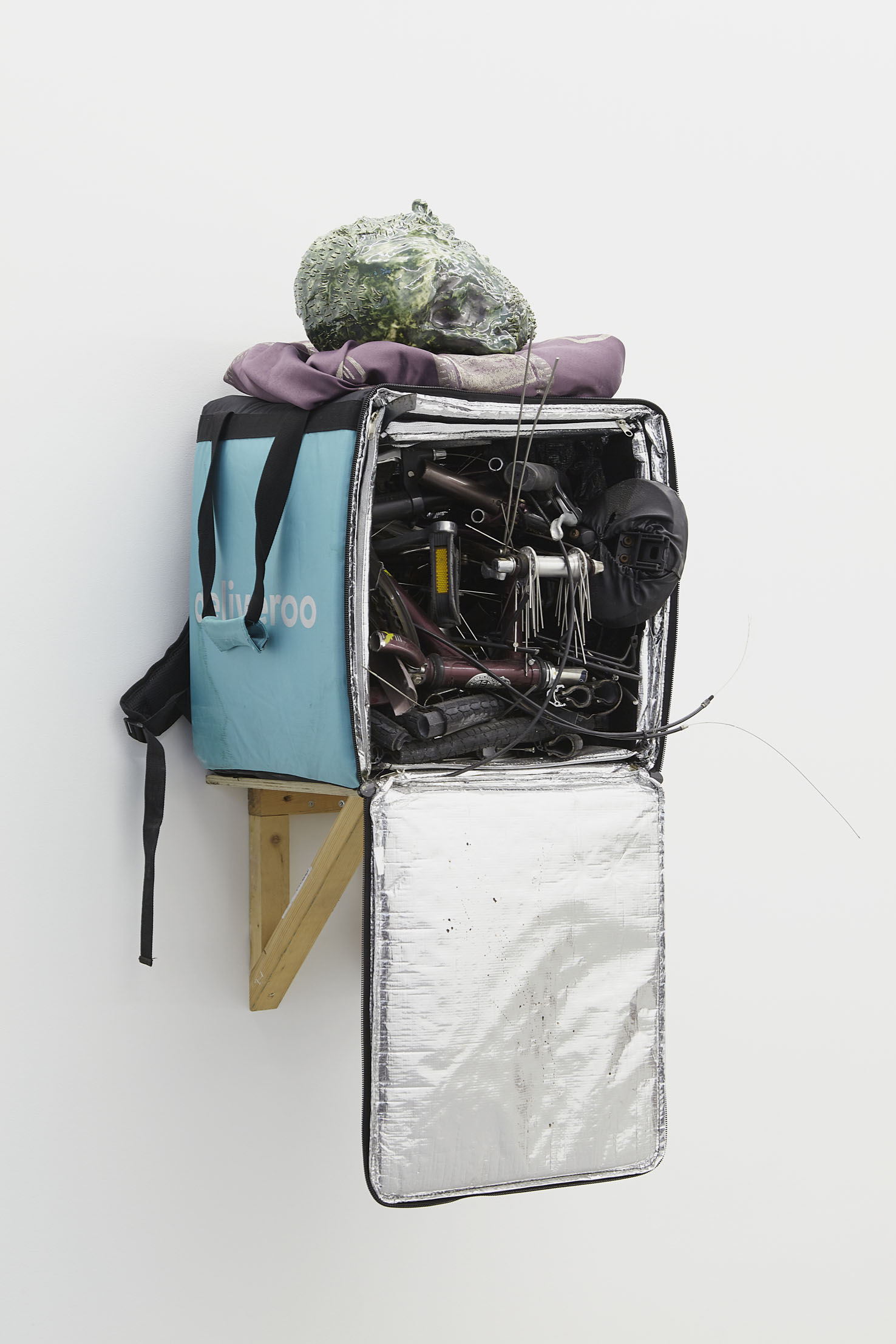 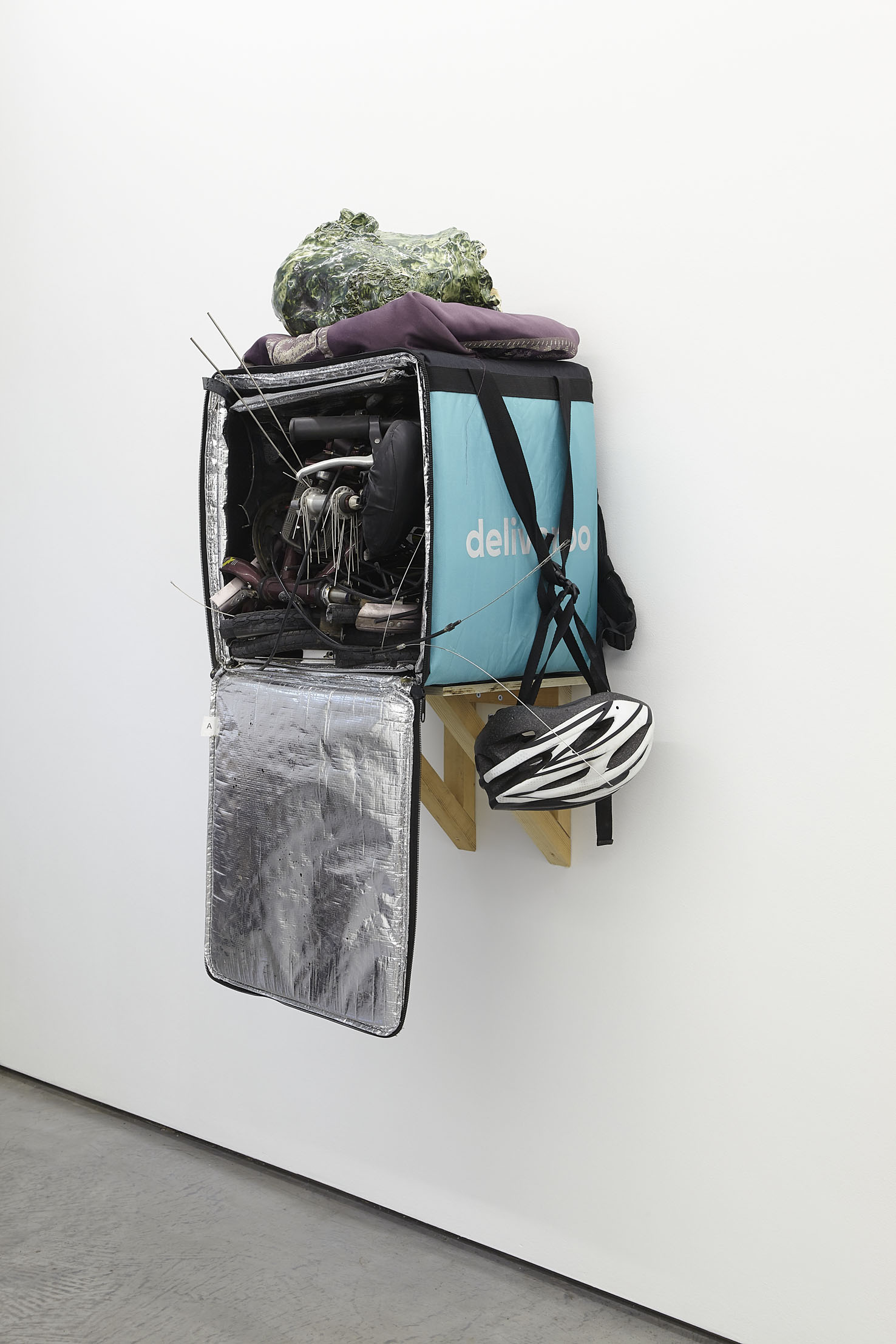 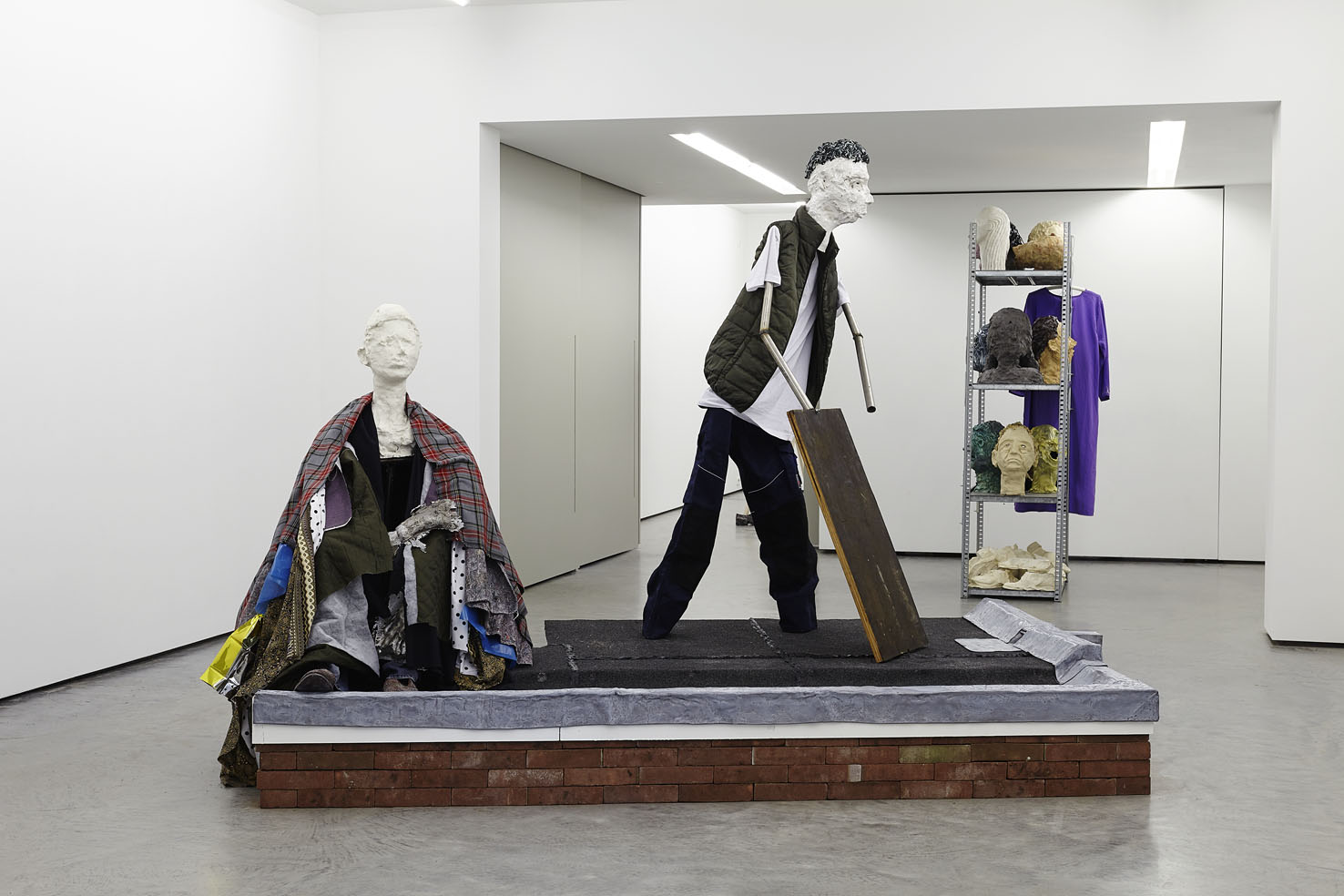 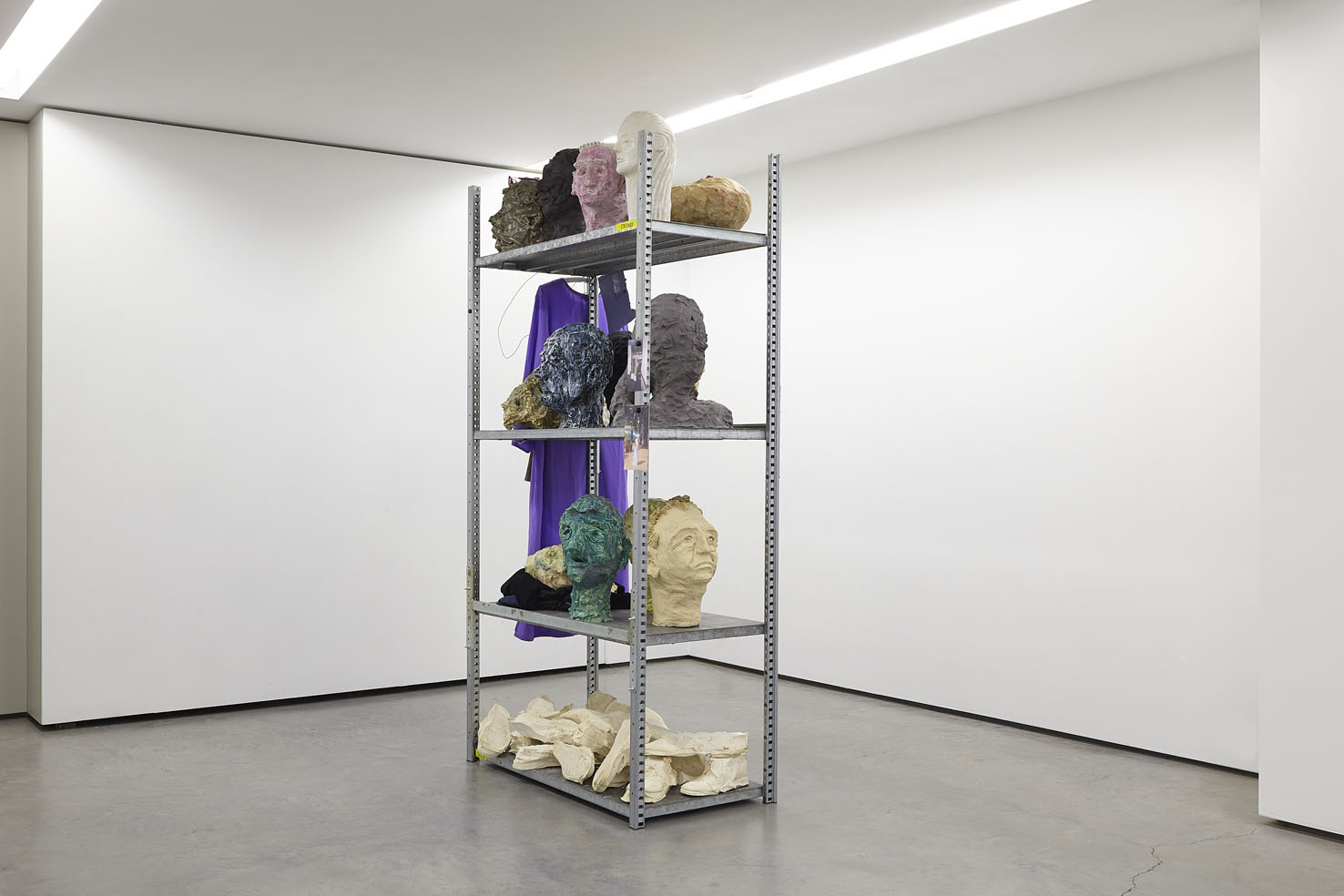 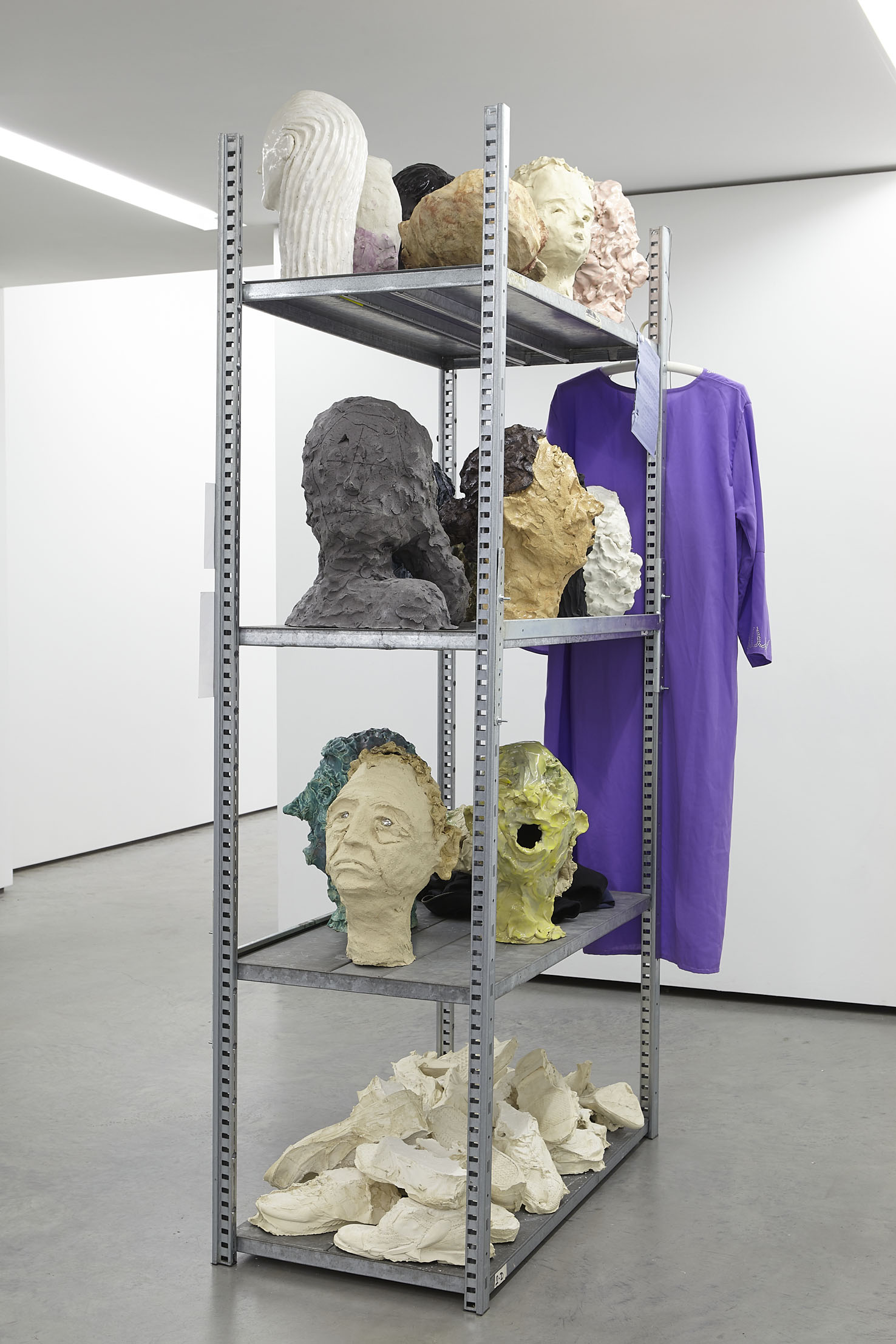 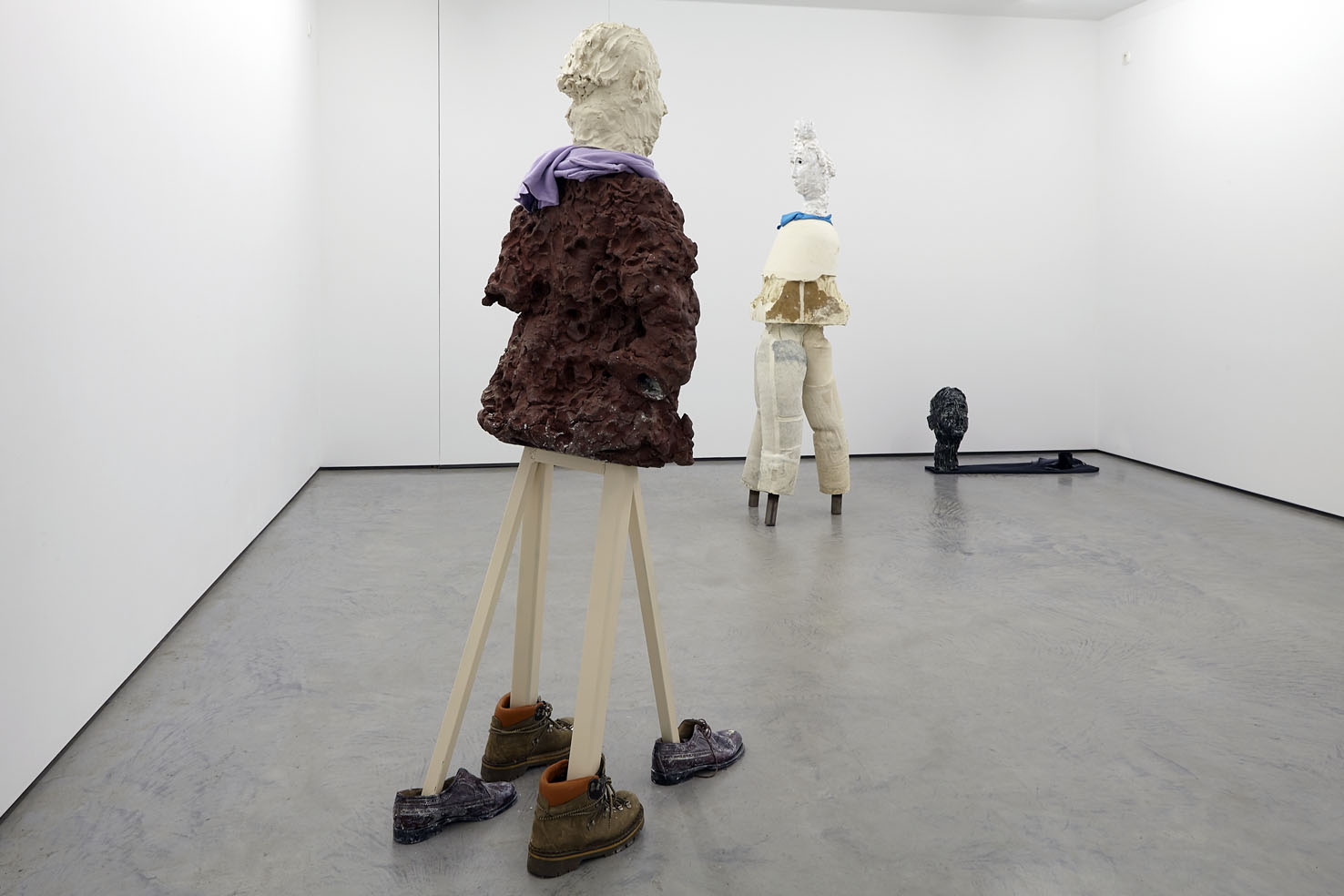 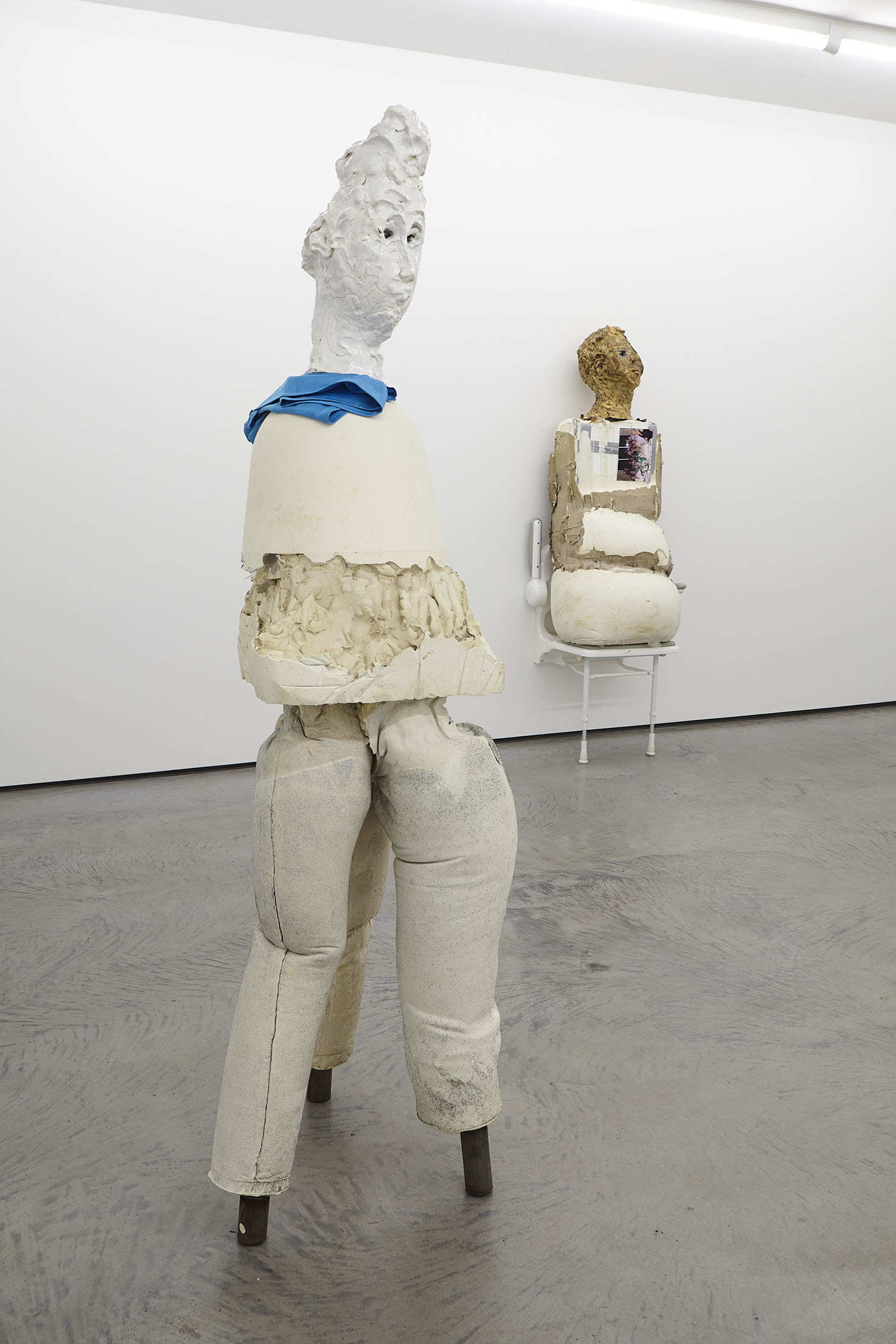 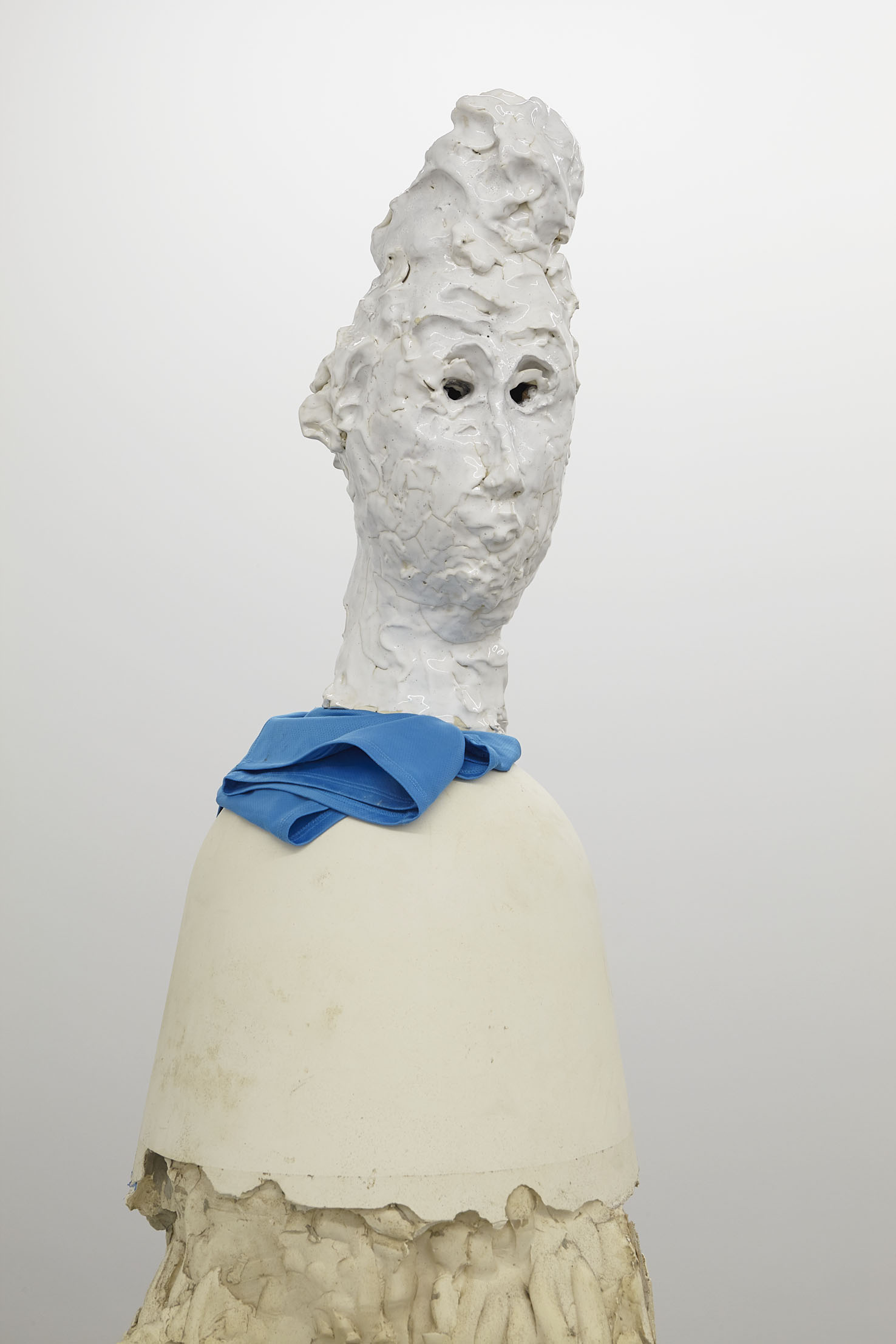 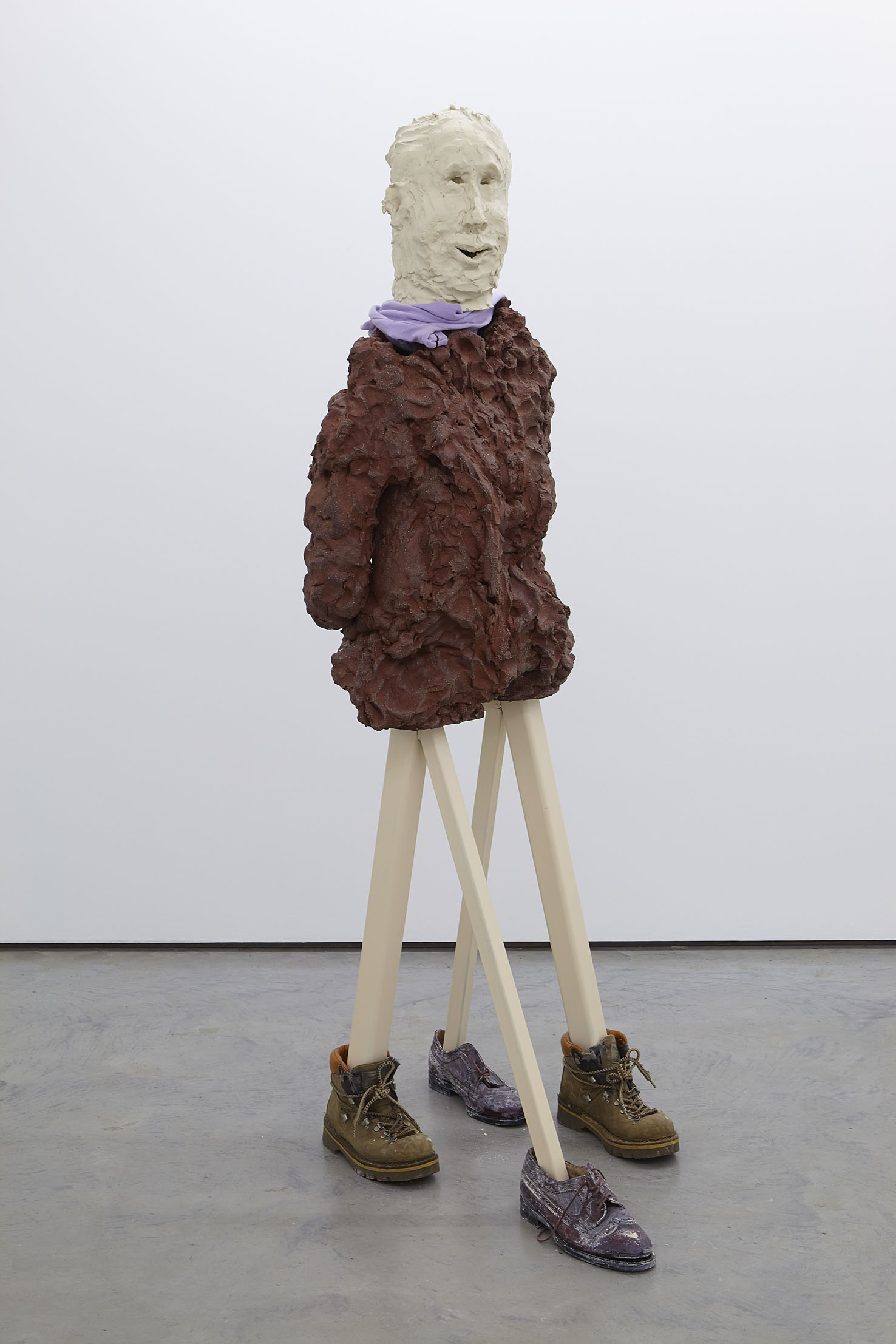 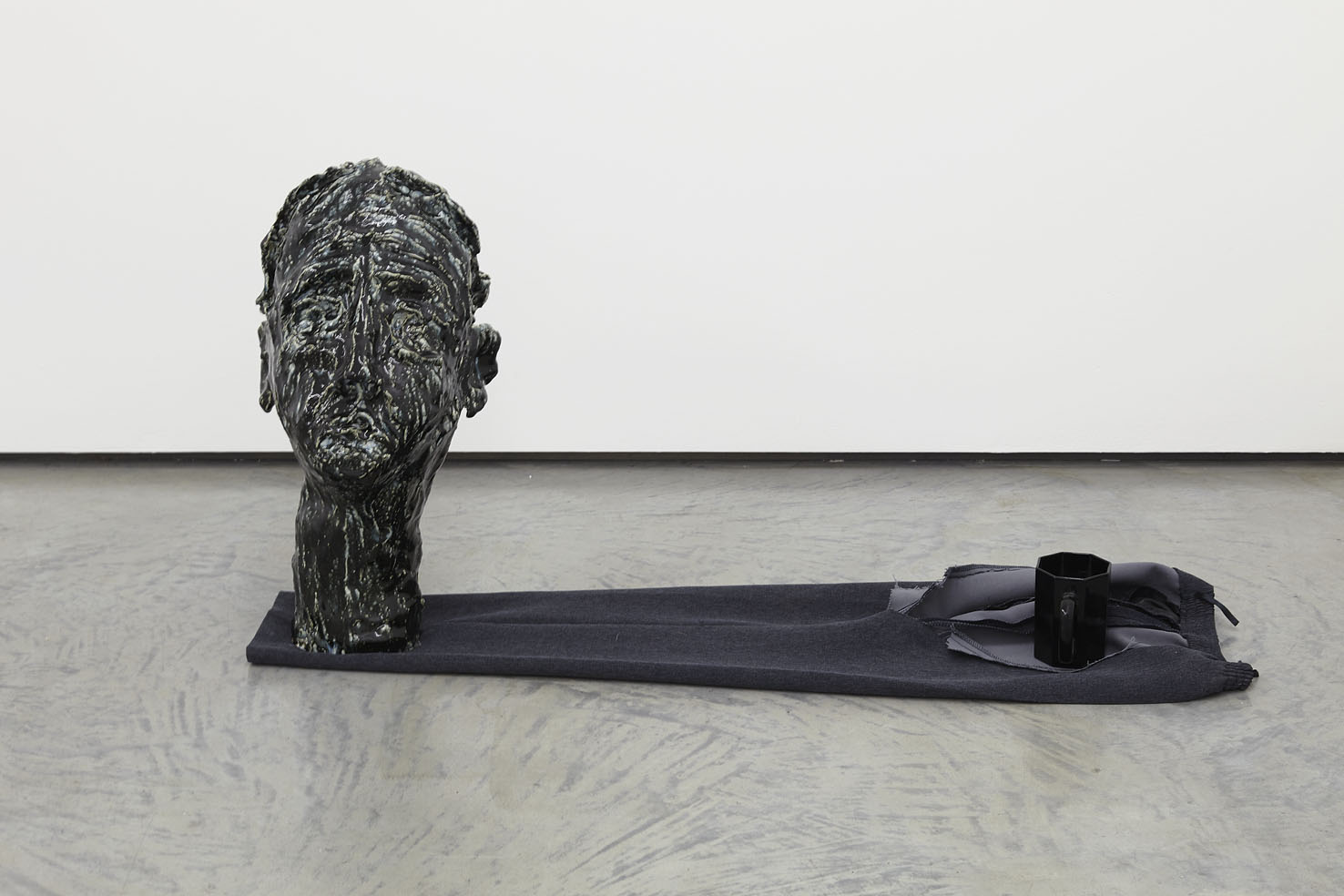 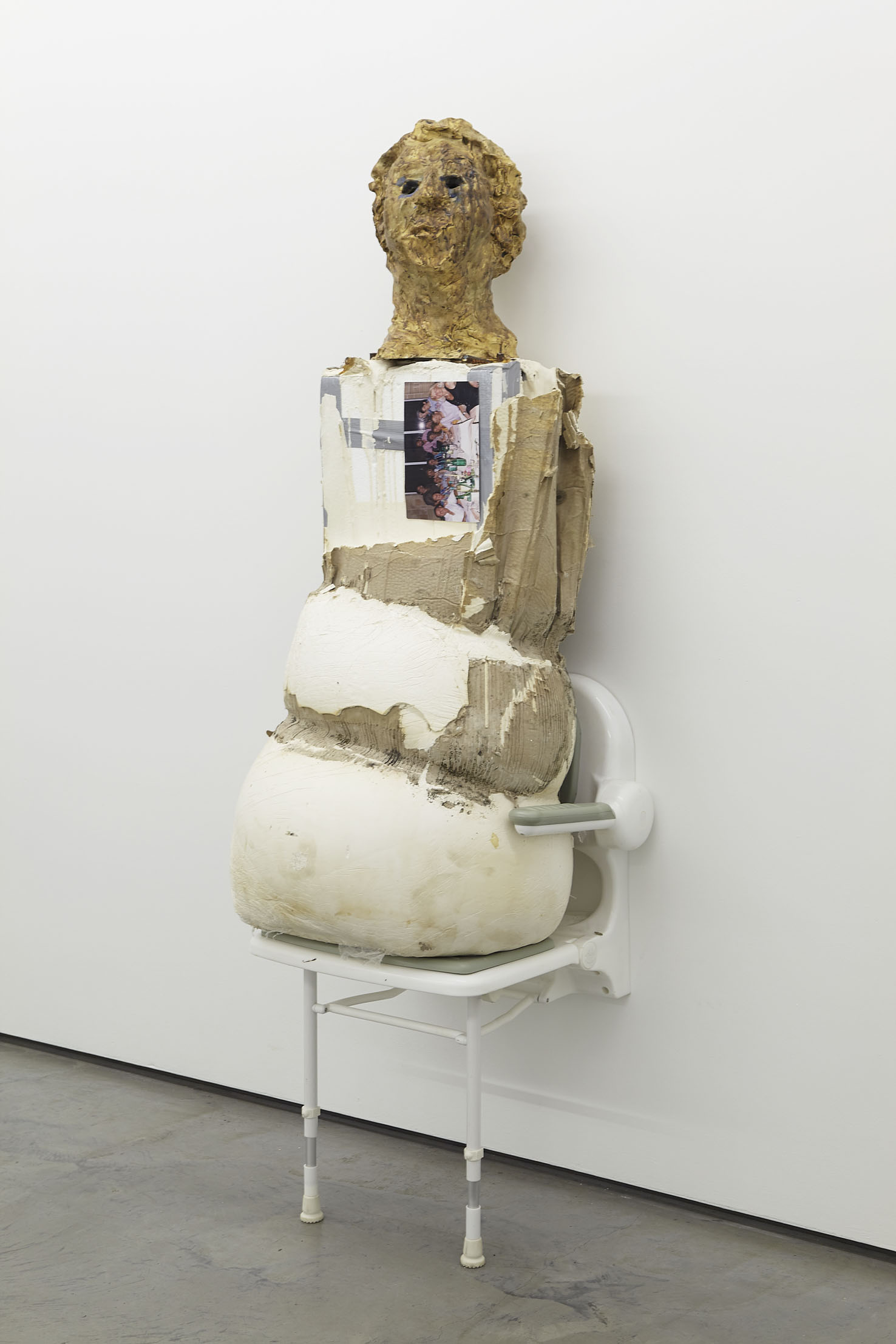 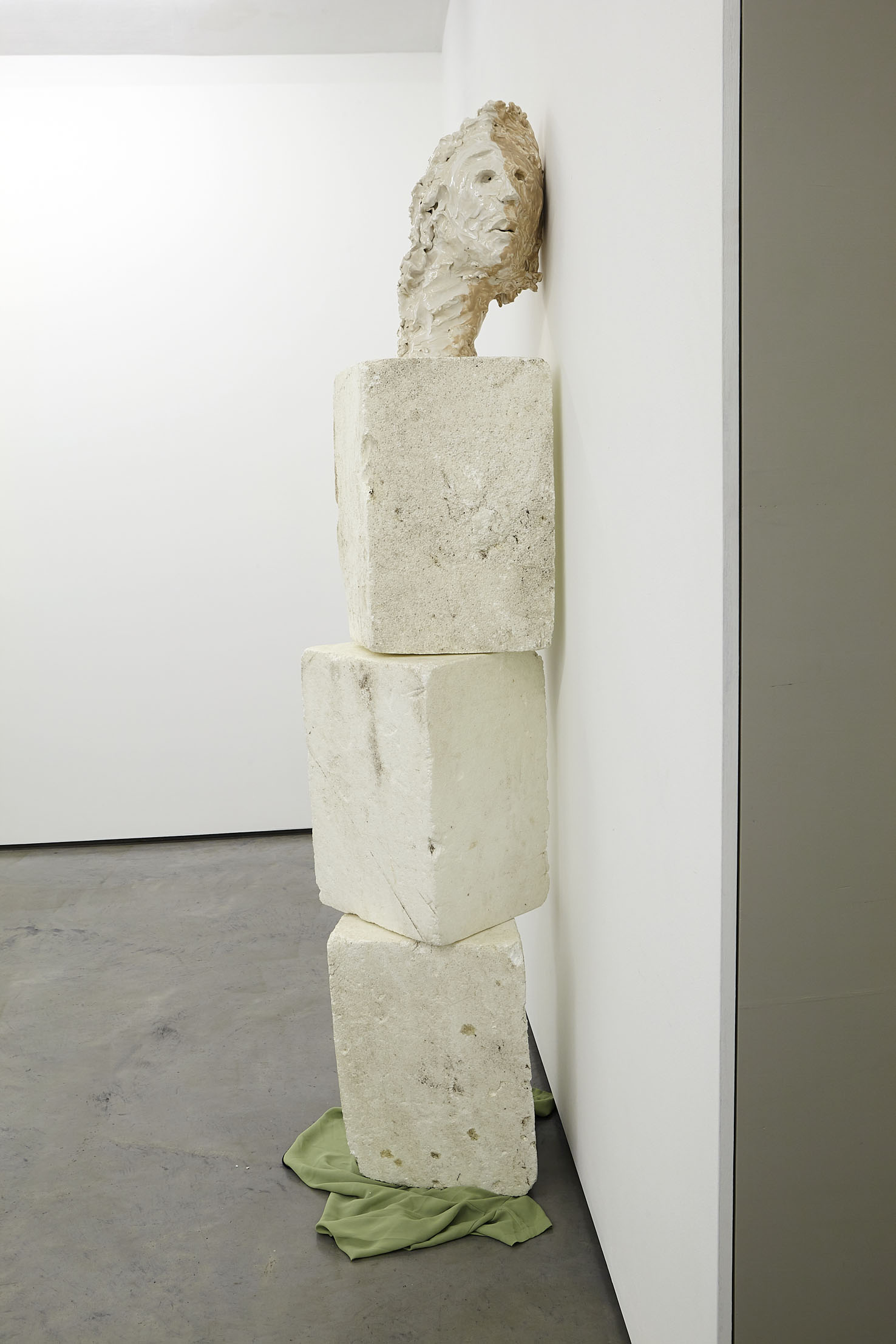 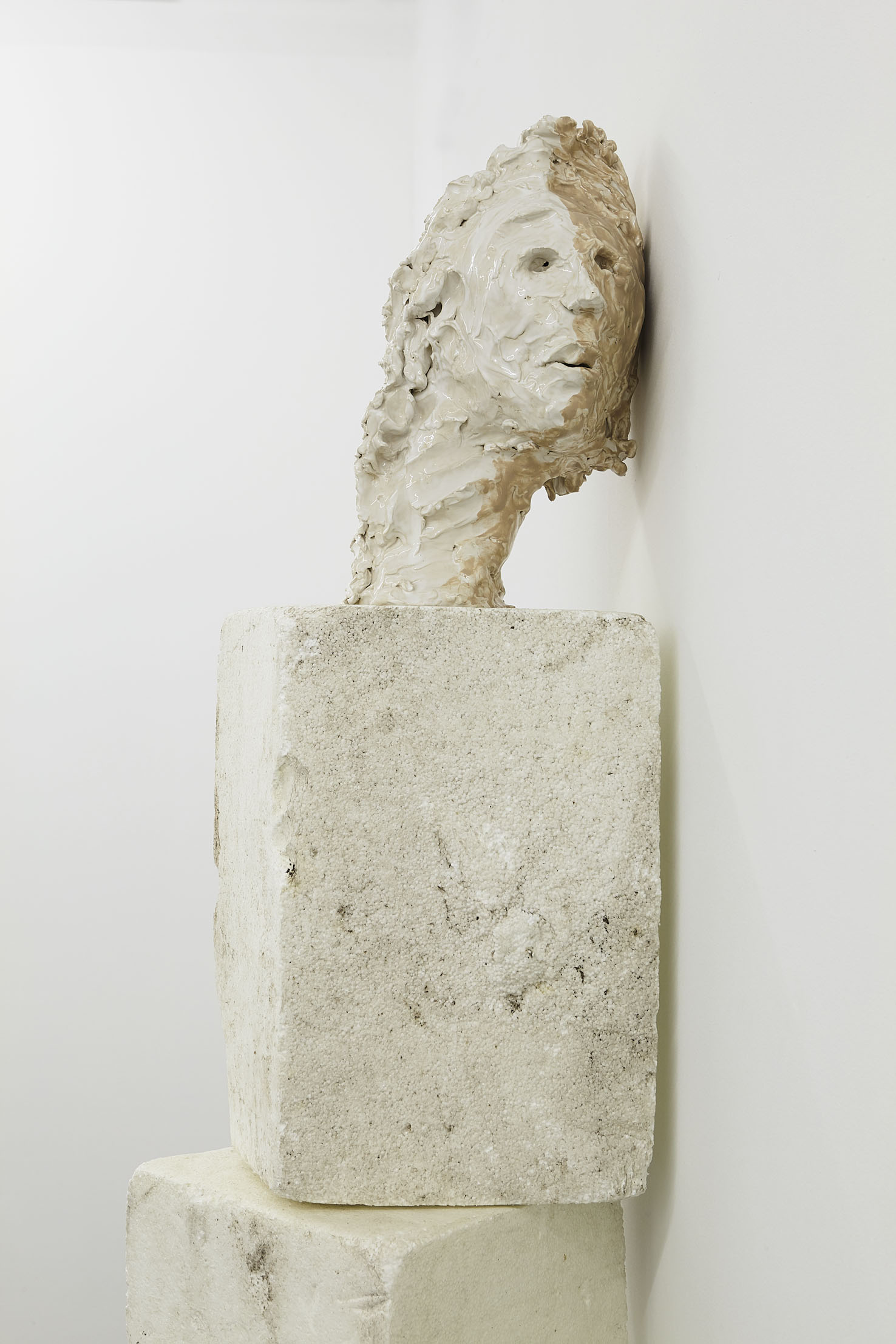 ‘Parts, Bits and Pieces’, a solo show of predominantly new work by Sander Breure & Witte van Hulzen, departs from the notion that people are essentially always playing a role. This role involves certain characteristics, a specific ‘mask’ and body language, as well as corresponding attributes such as clothing. Breure & Van Hulzen have created an installation consisting of various sculptures. Human figures, but also individual heads, have been staged in a theatrical setting as representatives of ‘optional’ roles.

The sculptures function as performers in a both realistic and imaginary theater of the commonplace. The modelled portraits and assembled figures make up a collection that can be displayed in different combinations. These are portraits based on observations from everyday life, whether they happen to be made with the likenesses of friends, acquaintances or anonymous passersby, or on the basis of fragmentary information such as an overheard conversation or vague memories.

In ancient times the countenance was already being referred to as the ‘mirror of the soul’. During the eighteenth century, physiognomy – the theory that a person’s character can be interpreted from outward appearance – became highly popular, particularly due to the ‘scientific’ treatises of the Swiss theologist Lavater. Wealthy ladies used Lavater’s method to analyze the facial features of their secret lovers. This fashionable hobby led to the refusal of many people to appear on the street without the protection of a mask.

A constant throughout the multidisciplinary work of Sander Breure & Witte van Hulzen is their fascination with human behavior, the coded structures within it, the influence of time and place on human relationships, physiognomy and body language. That societal interest is explicitly manifest in ‘Parts, Bits and Pieces’. Here the word ‘part’ can also be taken to mean ‘role’: the role played by an actor, for instance, but also the roles (of pupil, doctor, mother, customer or loved one) played by people in day-to-day life.

Defined frameworks prove to be fluid and interchangeable in the exhibition. Here the notion of identity is emphatically presented as a construction. While Breure & Van Hulzen do shed light on this topical theme, they avoid any moral component or message. The sculptures are comprised of individual segments, ‘bits and pieces’, or constitute elements in themselves, as can be seen with the heads. One of the sculptures in the exhibition, a full-size human figure, stands on a multi-level object, a roof, which represents the urban environment – the city as a theater, a stage for the human condition.

Legend has it that there was once a baker from Eeklo, in Belgium, who had an unusual talent: he specialized in ‘baking’ transformed versions of heads. If your own face didn’t suit you, no problem, the baker from Eeklo could set you free of that cursed mug. Any facial expression or characteristic desired could be baked into a new mask, a new countenance. Nobody knows when this baker lived or how this story came into being. In a certain sense the exhibition holds a mirror up to the audience, as we are actually all the baker from this legend. We construct our personality according to our needs and desires, and are swayed most of all by the issues of the day.

Sander Breure & Witte van Hulzen both live and work in Amsterdam. Breure graduated from the Royal Conservatoire in The Hague, and Van Hulzen obtained his degree from Artez in Arnhem. Their multidisciplinary practice is based on research on body language and its interpretation. Their work has been shown in solo and group presentations in the Netherlands and abroad, including pieces at the Stedelijk Museum Amsterdam, 2014, and the Contour 7 Biennial for the Moving Image in Mechelen, 2015. They have been residents at Platform Garanti in Istanbul, 2009; at Hangar in Barcelona, 2010; at the Foundation of the Arts NYFA, in New York, 2012; and at CCA Zamek Ujazdowski, Warsaw, 2015. In 2016 and 2017 they participated in the residency program of the Rijksakademie van Beeldende Kunsten, Amsterdam. Their work has been awarded multiple prizes, including the René Coelho prize and the TENT Academy Award in 2009, the main award at the Seoul New Media Festival in 2016 and the Charlotte Köhlerprize in 2018.

The exhibition is made possible in part by: Mondriaan Fund, Prins Bernhard Cultuurfonds and Dordtyart.