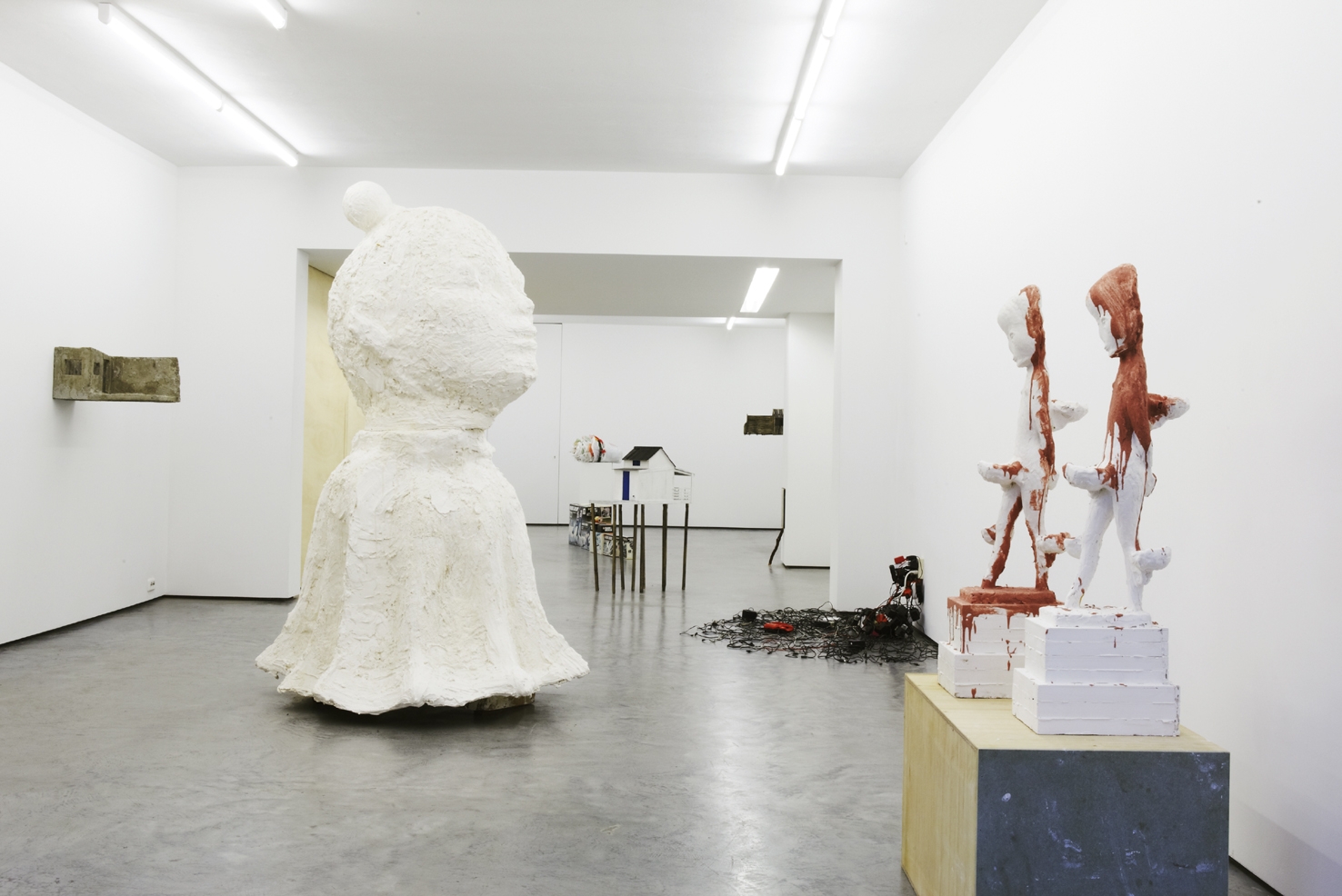 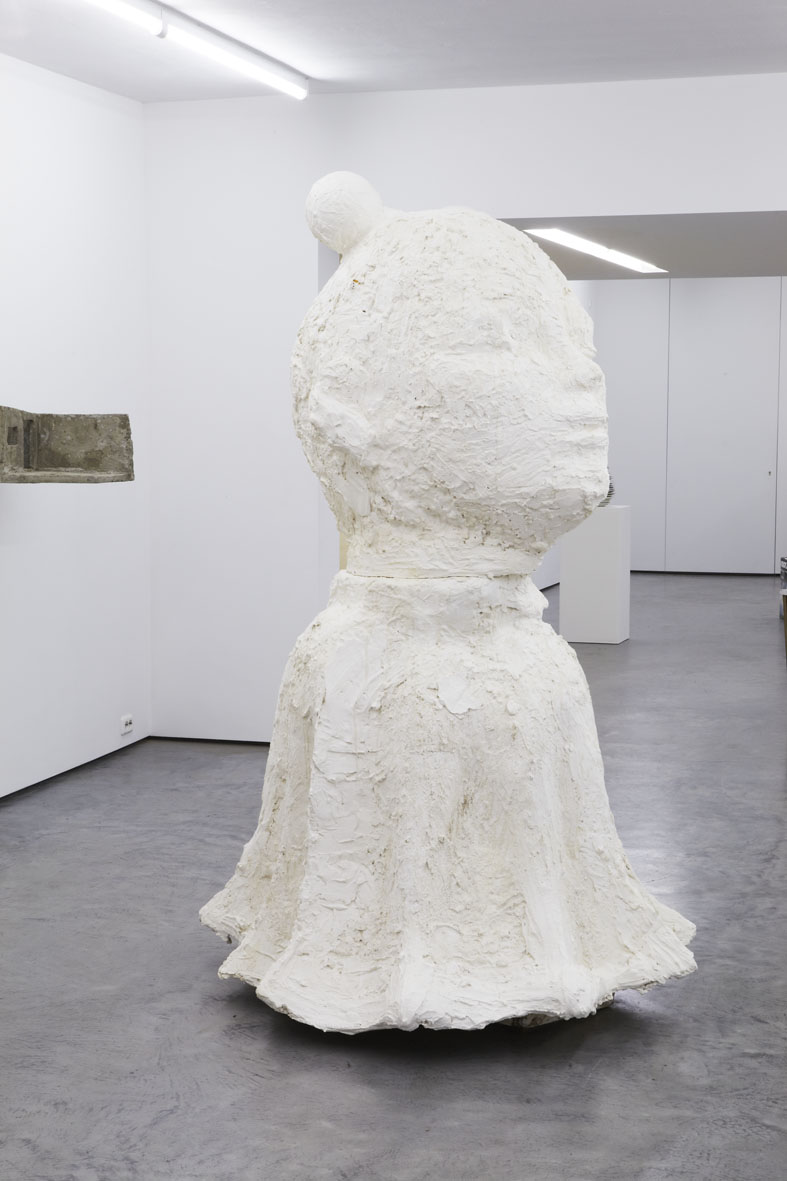 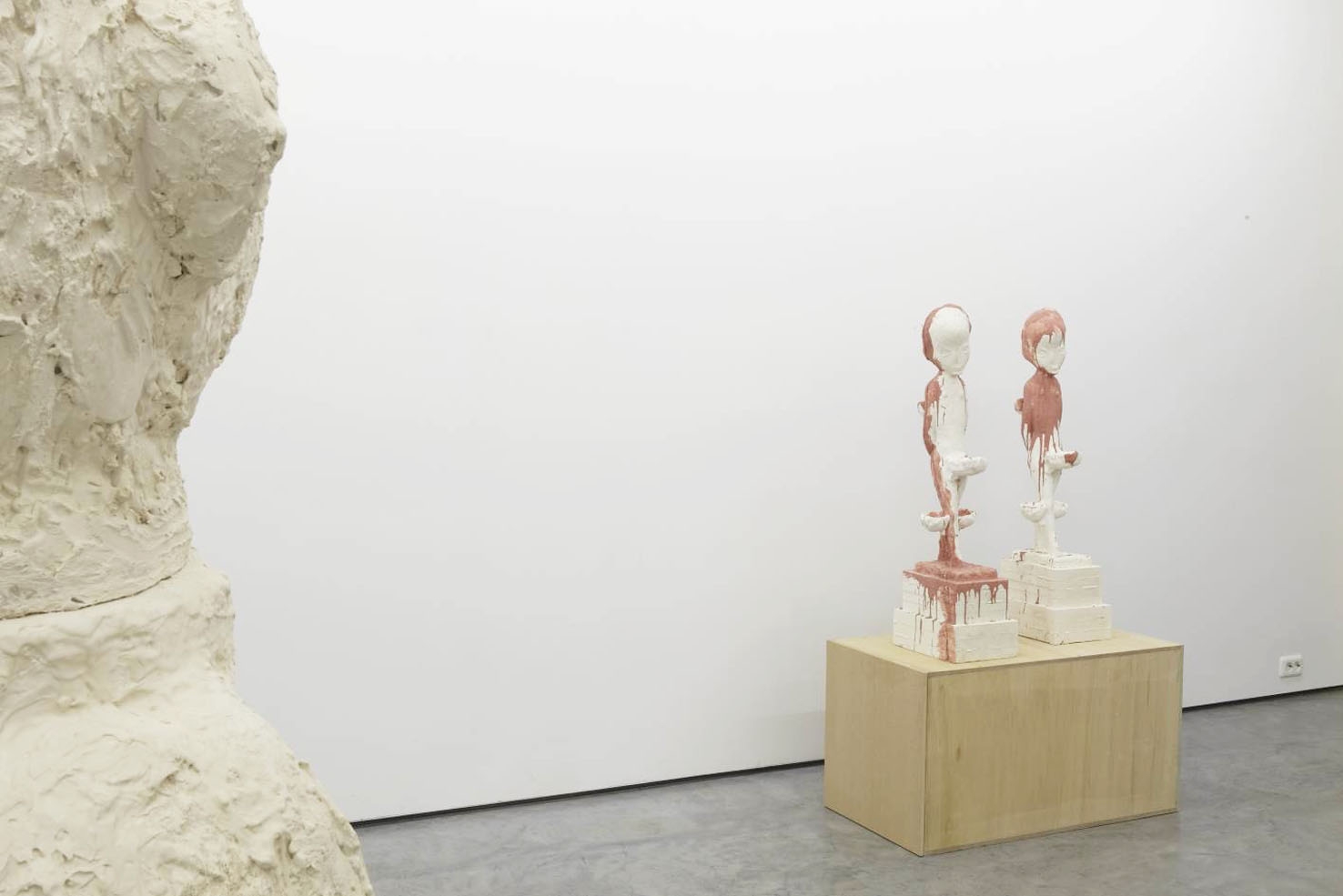 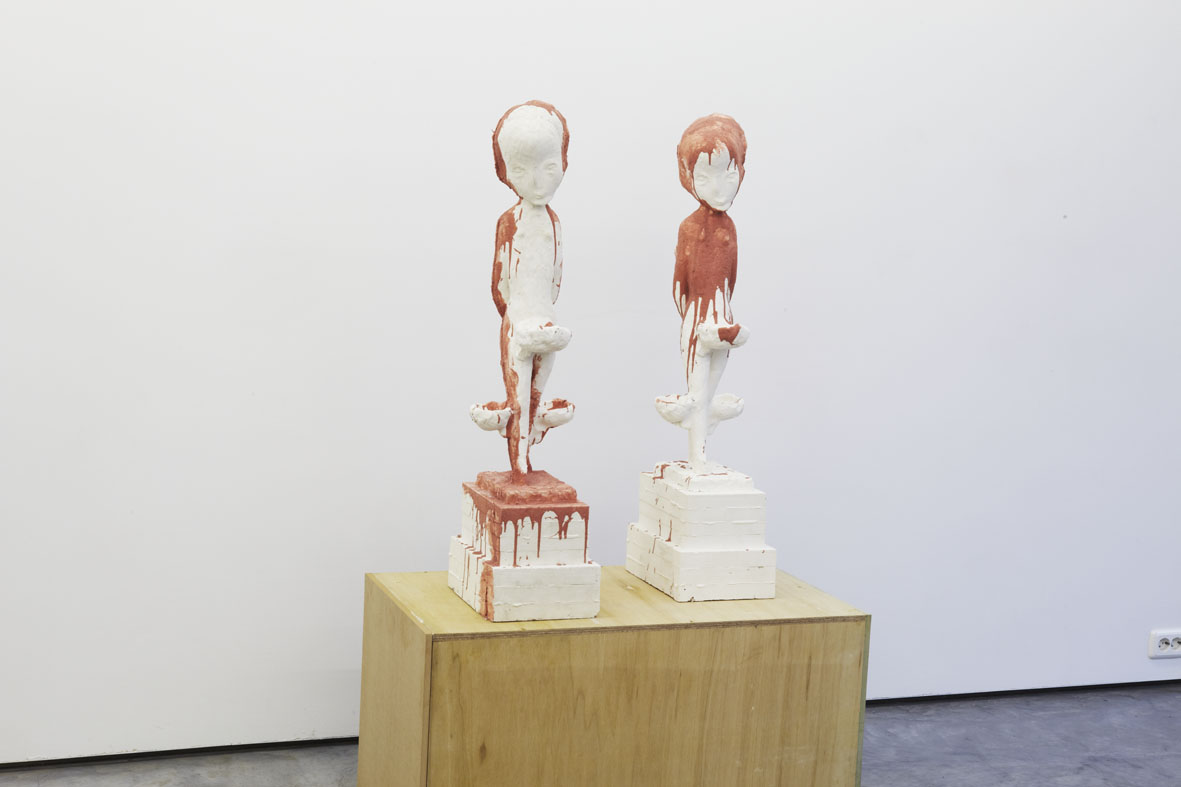 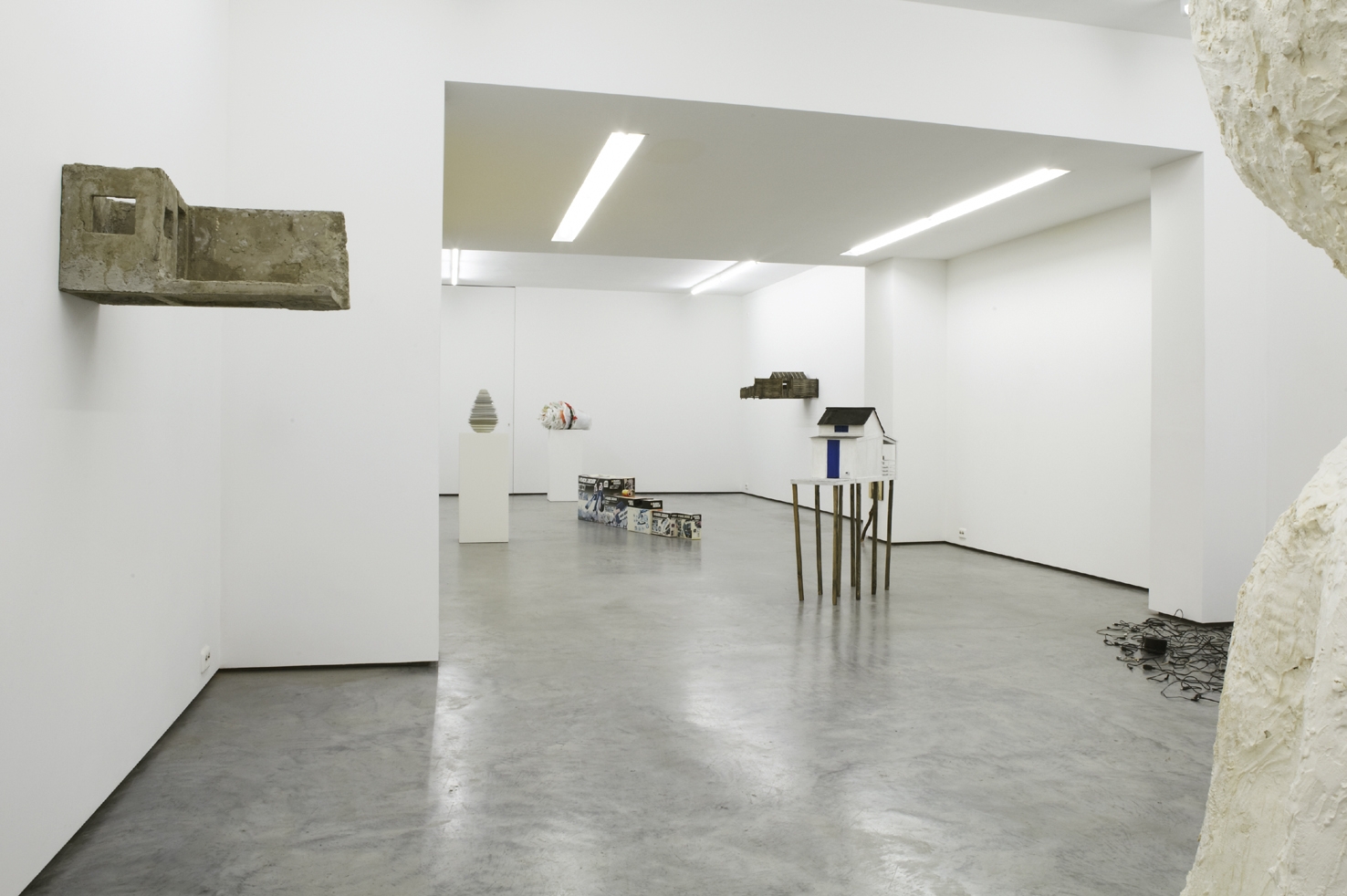 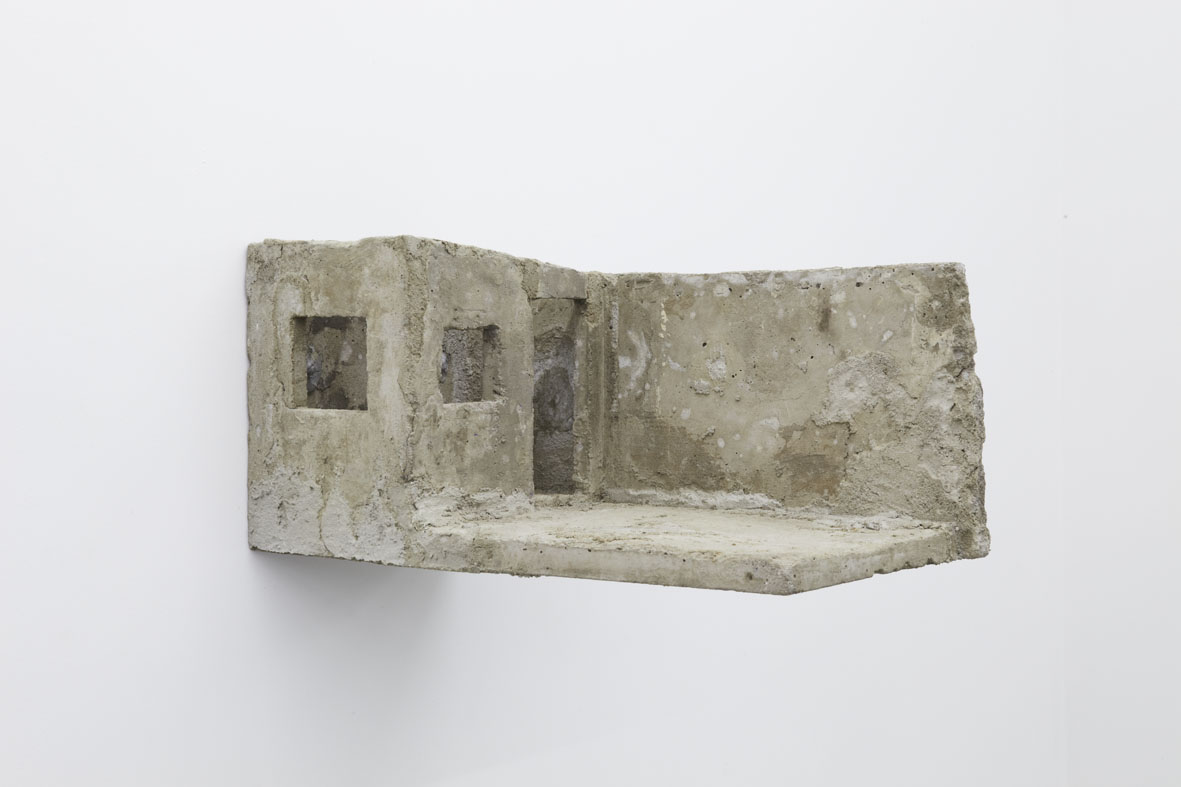 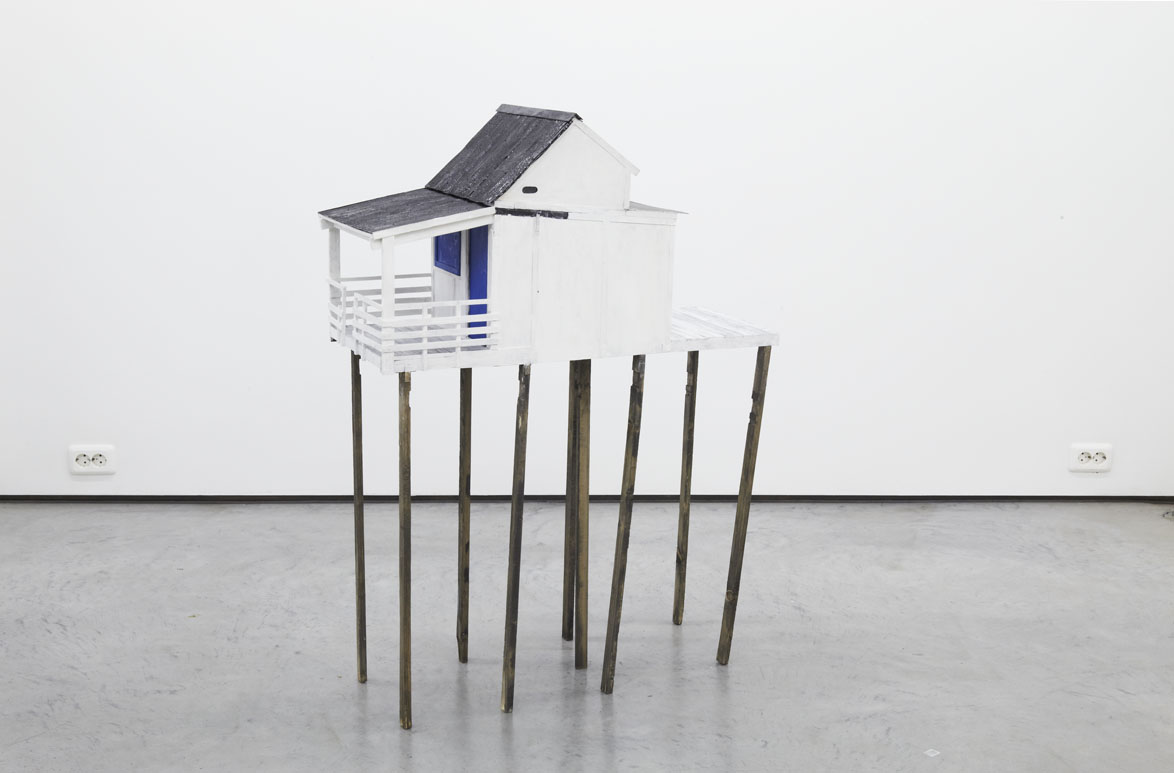 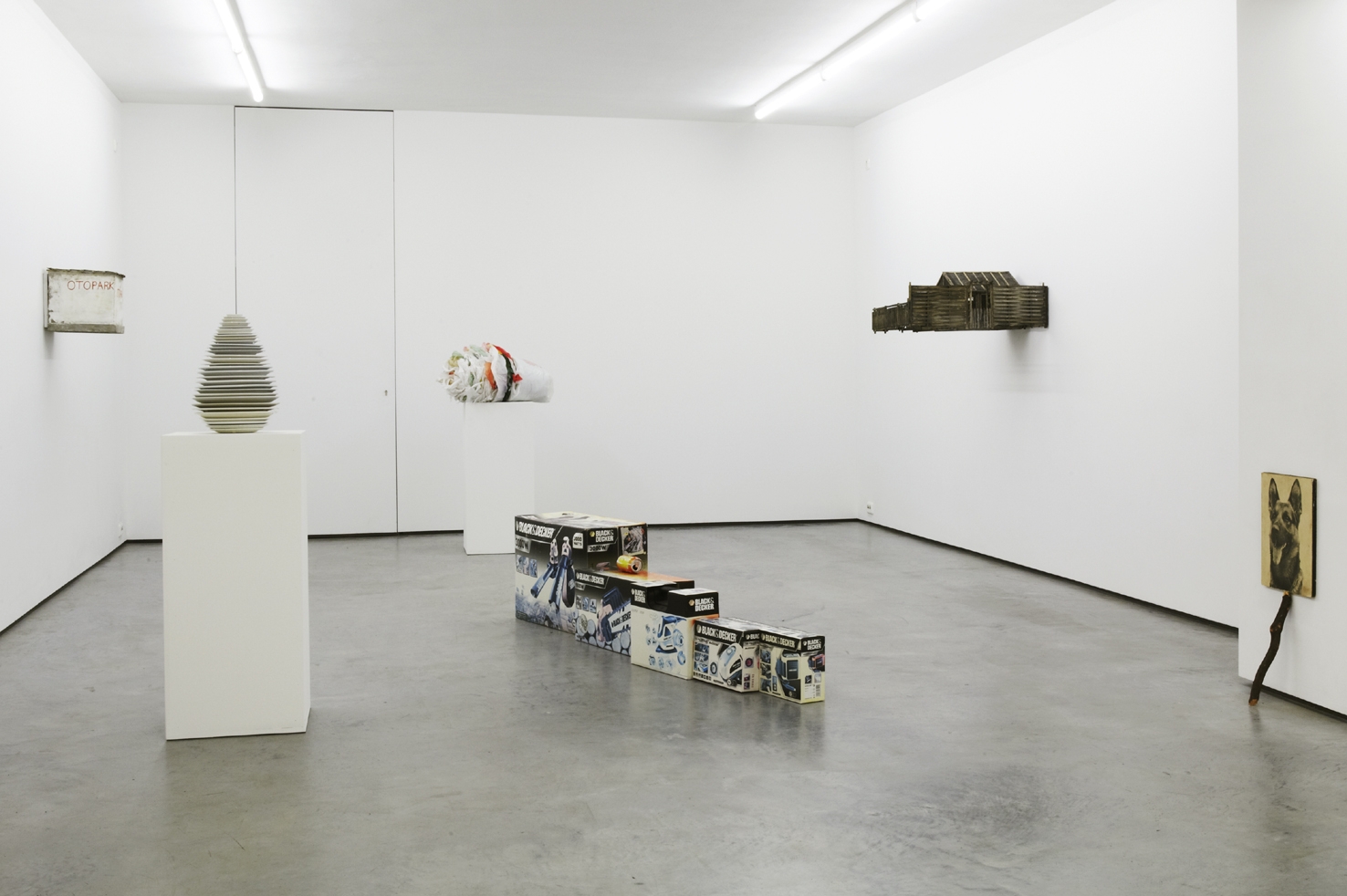 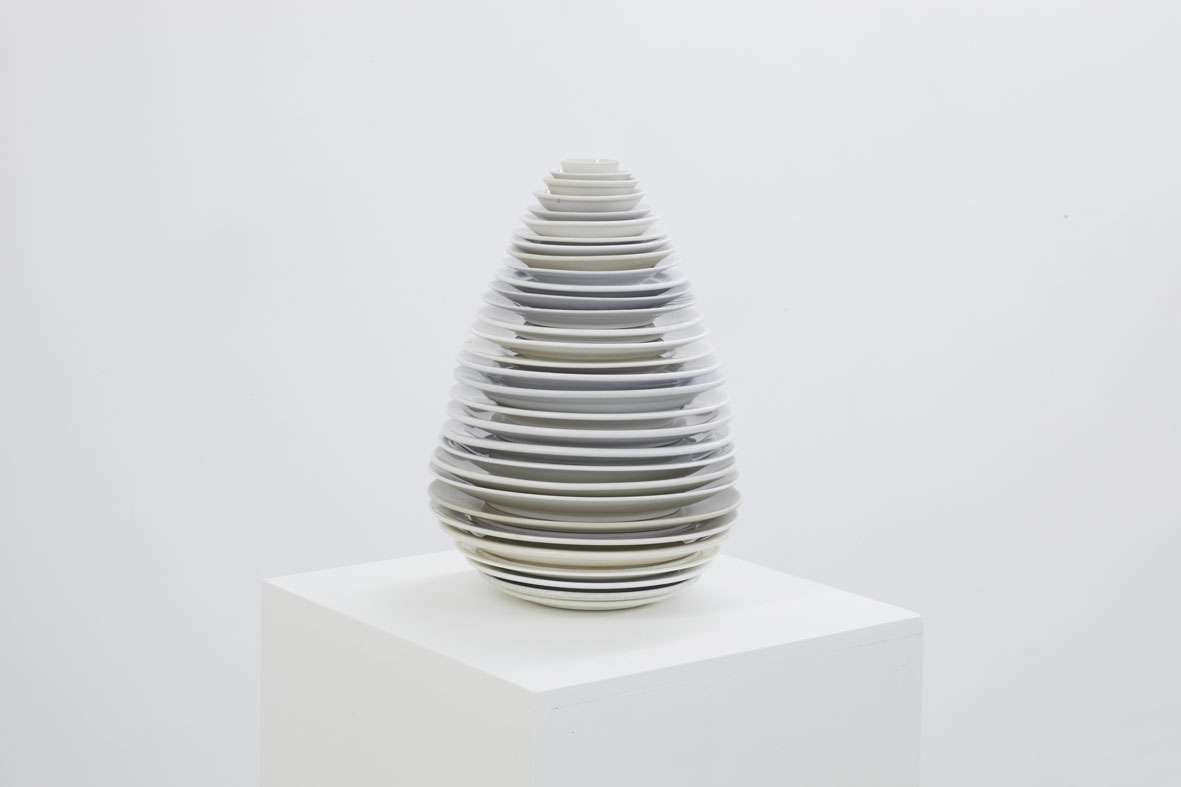 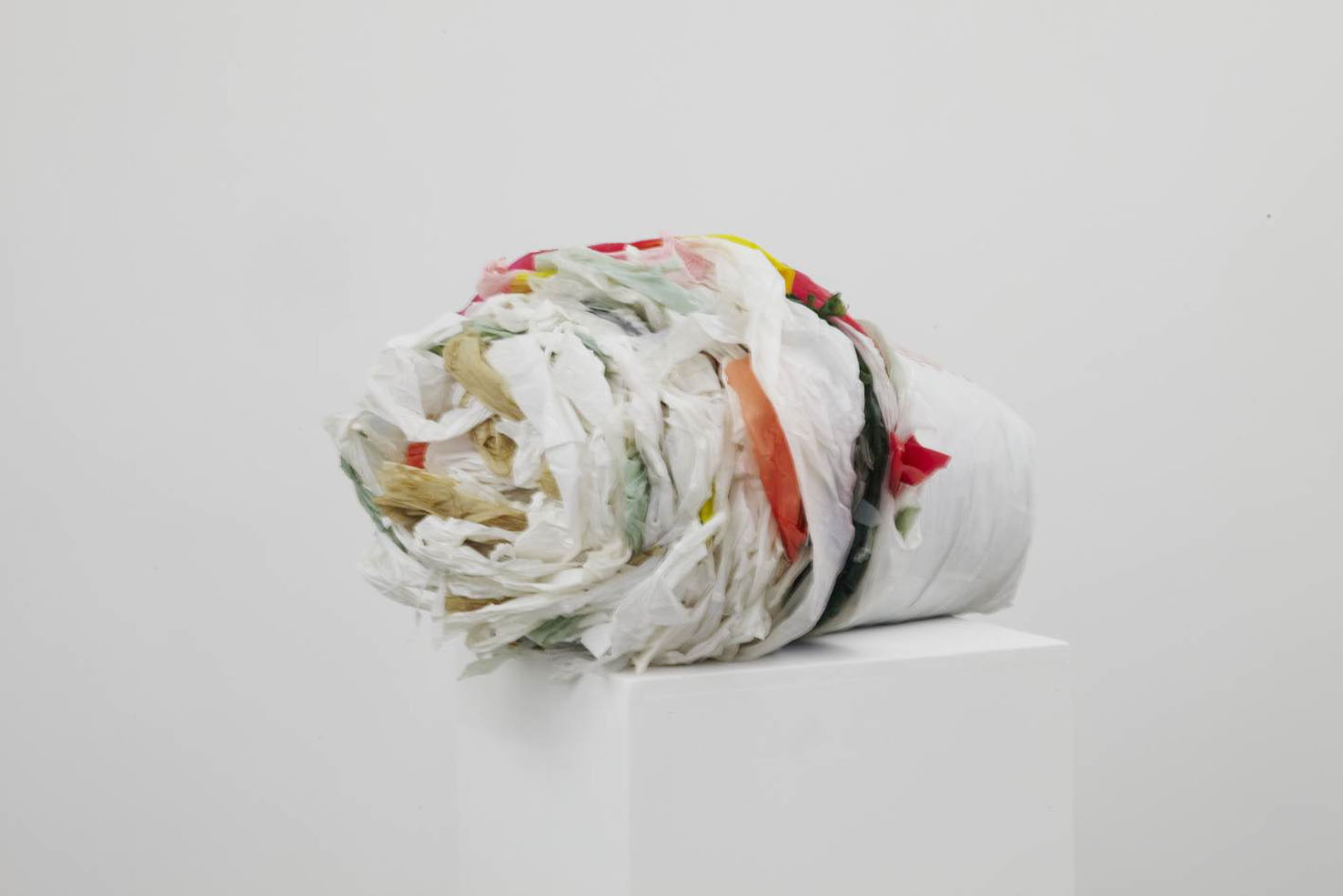 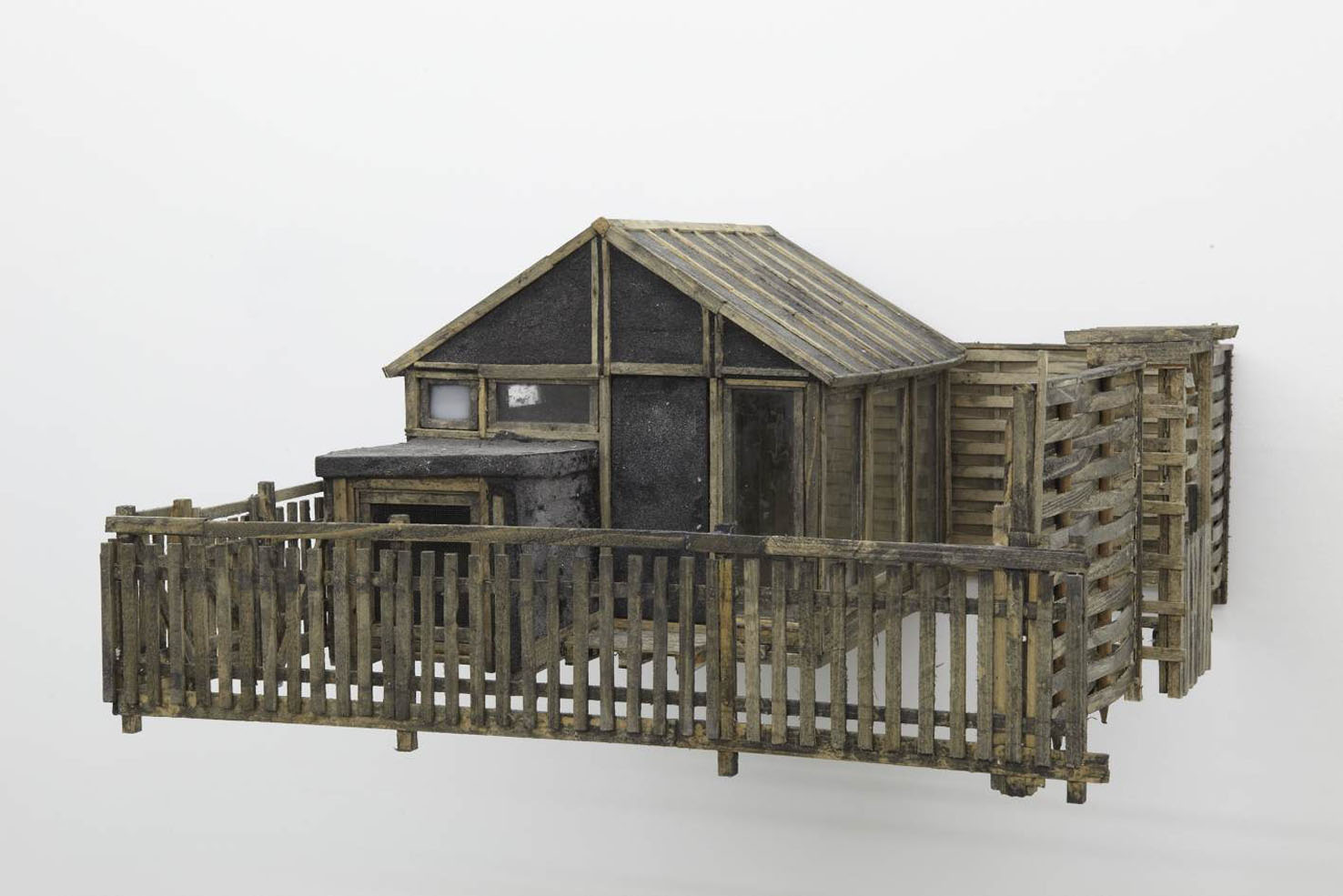 In a series of group exhibitions whose theme relates to the range of media and the diverse stances adopted within those media, we now shift the focus to sculpture. Under the title of MAGIC, tegenboschvanvreden presents the work of four artists: Khan Lee, Stephan Mörsch, Frederik van Simaey and Johan Tahon. No parade of pedestals topped with artworks here, but a magical world of objects that invade the gallery. Emerging from the walls, the floors and the ceiling—yes, even from the pipes—the sculptures conquer the space and enter into a dialogue with each other. Sculpture and gravity may seem inevitably linked, but in MAGIC the classical principles of sculpture are hardly taken seriously. The fusion of distinct and opposite realms, from the conceptual and the poetic to the analytical and physical, yields a lively whole. That includes, of course, the touch of wistfulness intrinsic to true magic.

Khan Lee (1972, Seoul, Korea) sees, in recognizable everyday objects, the potential for more than their usual purpose. In the United States and Canada, where Lee lives and works, the consumer’s use of the plastic bag has assumed greater proportions than it has here. For his work 365 (2009) Lee has stuffed together, in a simple yet visually powerful comment, every plastic bag used by him, one for each day of the year. In doing so he has literally condensed a year of his own life into a ‘body’ bulging with colorful plastic. Despite its symbolization of time, the object may eventually turn into the very picture of timelessness. Lee’s spatial installations are overwhelming, because he completely inverts the material and the function of the used objects. Every work by Lee has its own method and its own background; no two works of his bear any resemblance to each other. The unity in Lee’s work lies with the sensitivity with which he views the world. It is both lighthearted and serious.

The strangely surprising buildings, houses and pavilions of Stephan Mörsch (1974, Aachen, Germany) are exact copies of existing buildings and constructed on a scale of 1:10. Not palaces but humble gas stations, garden huts, cabanas or apartments and their historical contexts intrigue the artist. In his reconstructions he is concerned not so much with the formal structures of the buildings as with the atmosphere of history that surrounds them like a thick blanket. Otopark (2007), for instance, refers to the guard houses found on parking lots in Istanbul. An urge to expand business makes the owners of these properties—caught in a web of mafioso practices—keep on building more of these huts in order to expand their territory. Like veritable ‘bodysnatchers’, the parasitic structures take up more and more public and private space; and because they comply with the urban landscape, they become an increasingly integral part of it. With his sculptures Mörsch evokes a world that has reverted to the primal needs of people. His work literally provides a ‘look inside’ things.

The sculptures of Frederik van Simaey (1979, Kortrijk, Belgium) comprise a microcosm of associative, small and delicate interventions in a day-to-day world. The transformations brought about by him convey a sense of lightness; sometimes they even leave no traces, becoming almost invisible, to the extent that they sweep the unsuspecting viewer away to a world beneath the surface of things, beyond the ever-familiar manifestation, for the discovery of a magically transformed world. That world is quiet and fragile, yet it also has an elegant and physical beauty. The fact that Van Simaey ‘captures’ his images as though they were butterflies becomes evident, for example, with a work in which he places a row of objects, colored by light, along side each other as a kind of sunset. Both surrealistic and conceptual, it comes from a rich (Belgian) tradition.

Chance and luck: a consummate duo that can be found inhabiting the studio of Johan Tahon (1965, Menen, Belgium). Irrelevant is the fact that chance demands continual concentration and alertness, and that luck is drawn from endless observation, thought, focus and physical experimentation. Chance and luck allow everything in the work of Tahon to flow and move and change constantly. The sculptures in plaster— sensory, vulnerable and yet solid-looking—are always in a state of flux, even when finished. Reuse is predominant. The figures take shape from the head down: from that central point “the contact with all directions becomes possible”, as Tahon himself puts it. Standing in the artist’s studio is a plaster figure, several meters in height; the body hunches forward, and crowning it impressively is a round, stylized head. After a bit of contemplation, the artist decides to use the head and then places it on a heavy flower form in the gallery. Like organisms, Tahon’s sculptures keep on thriving.