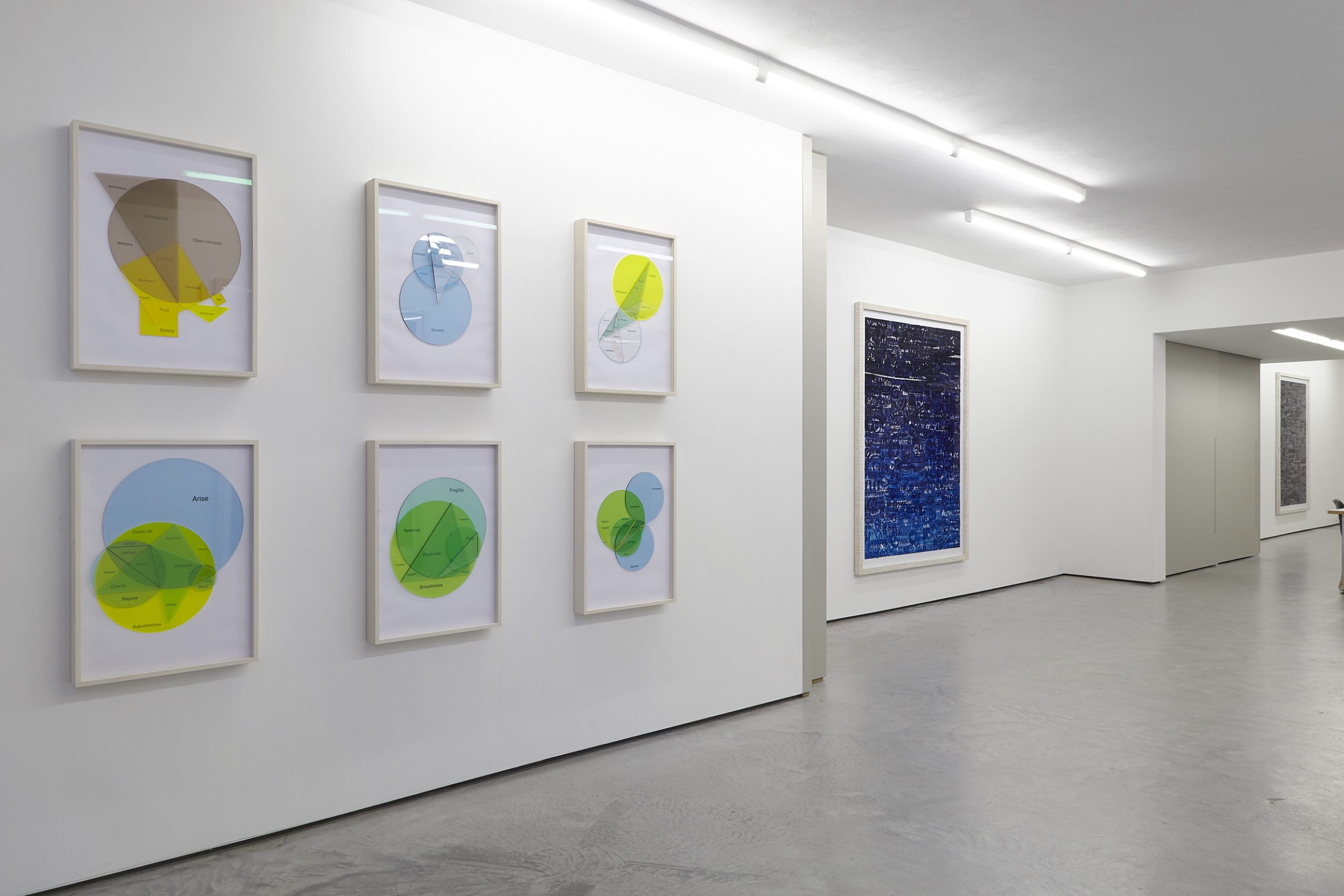 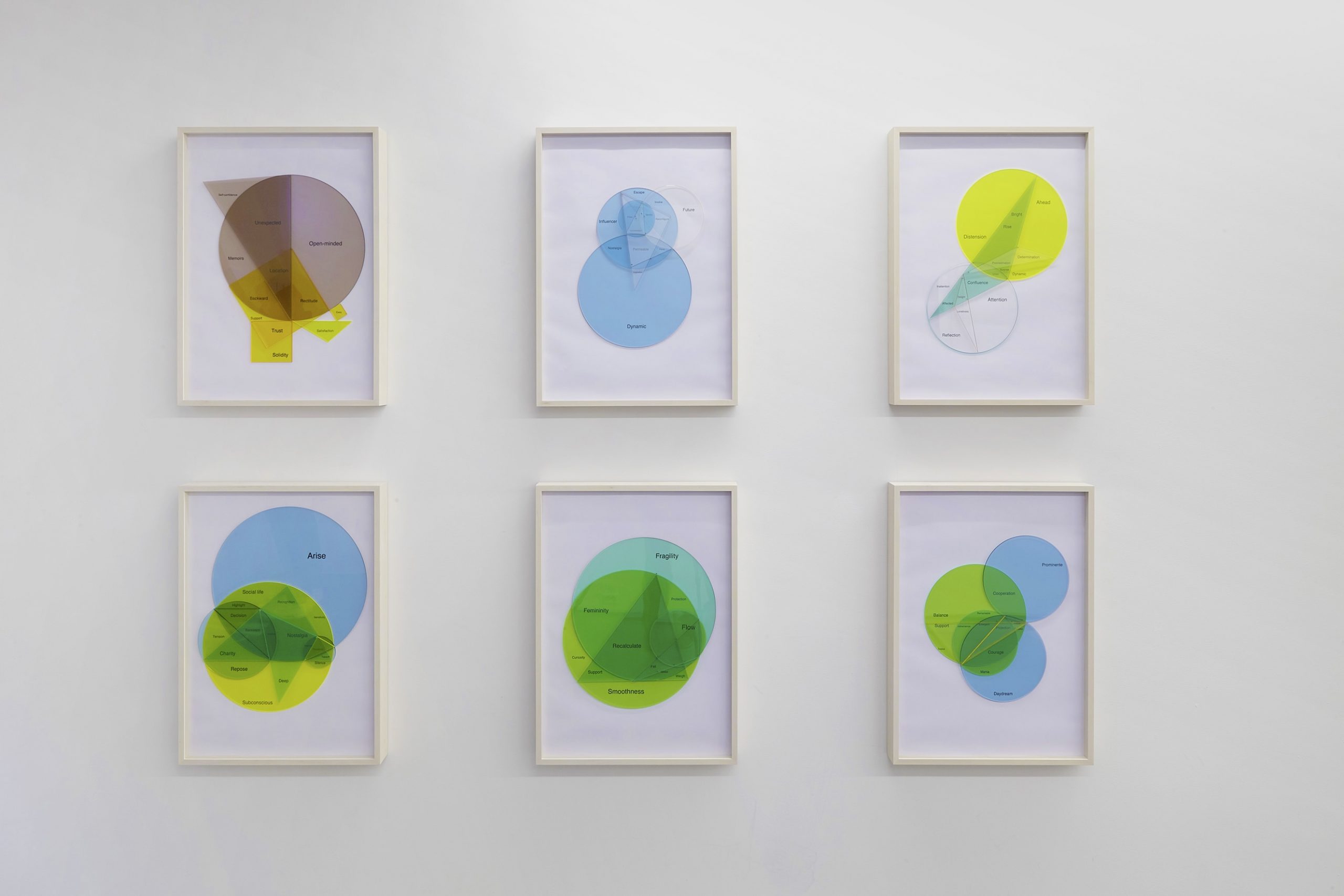 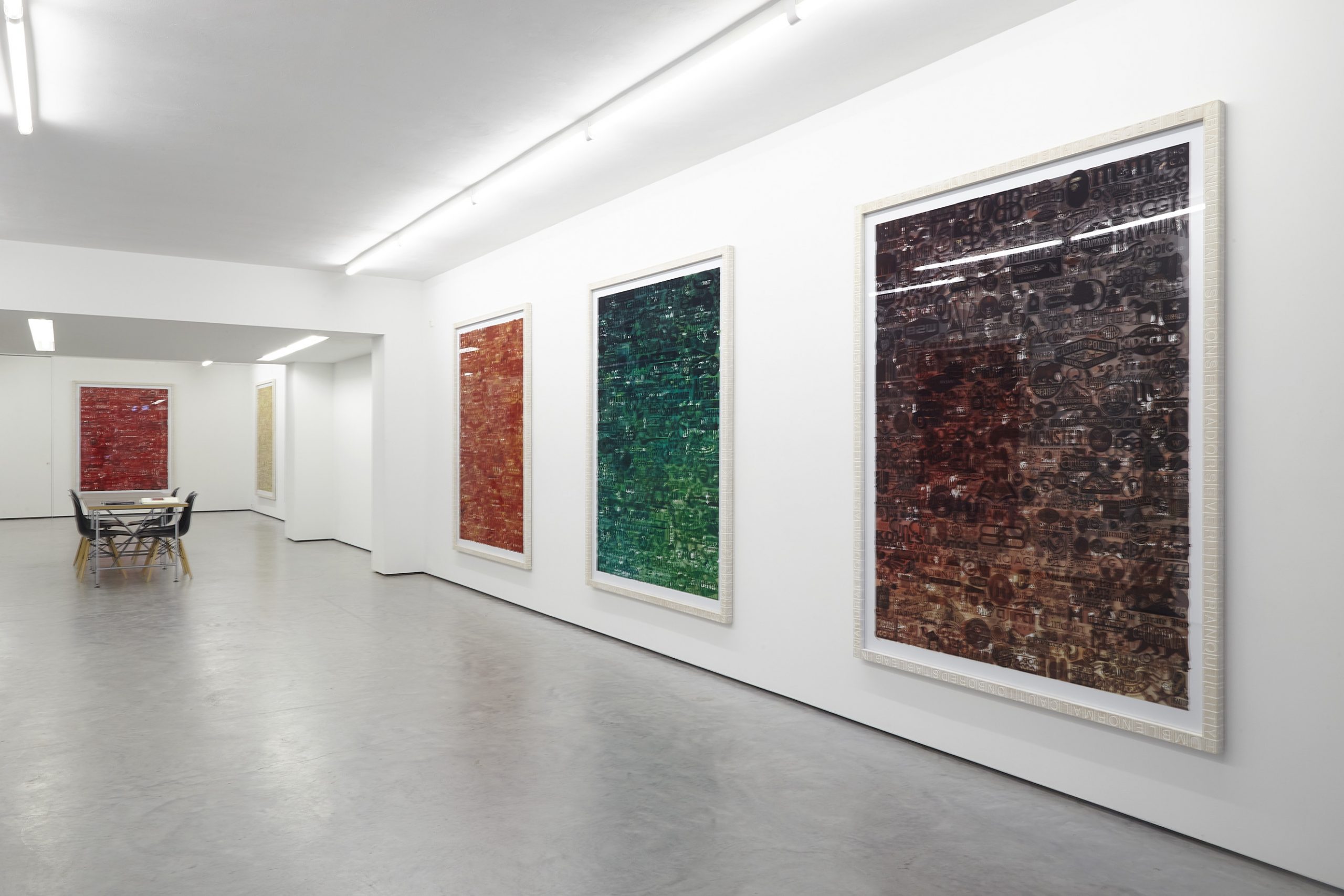 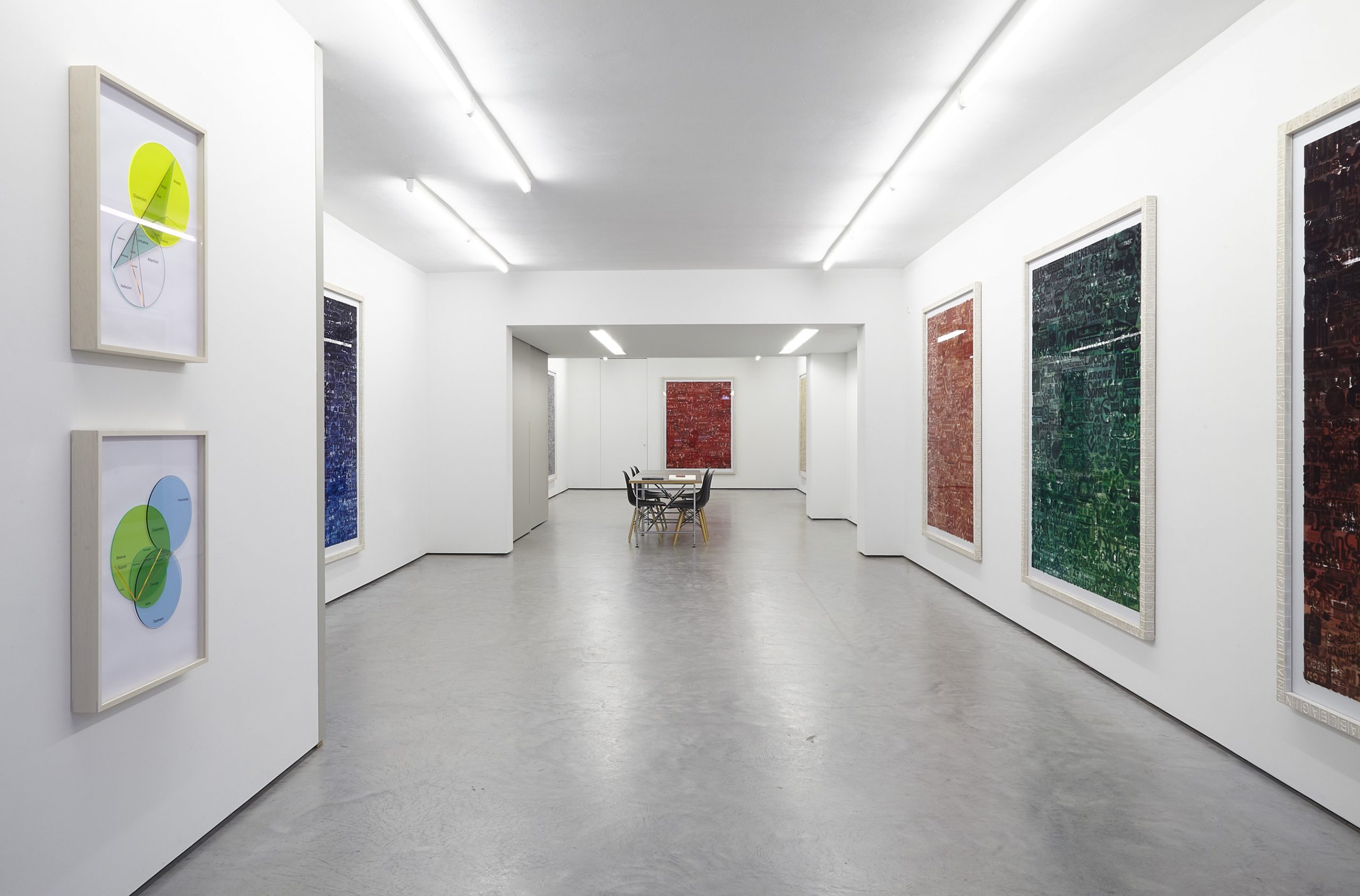 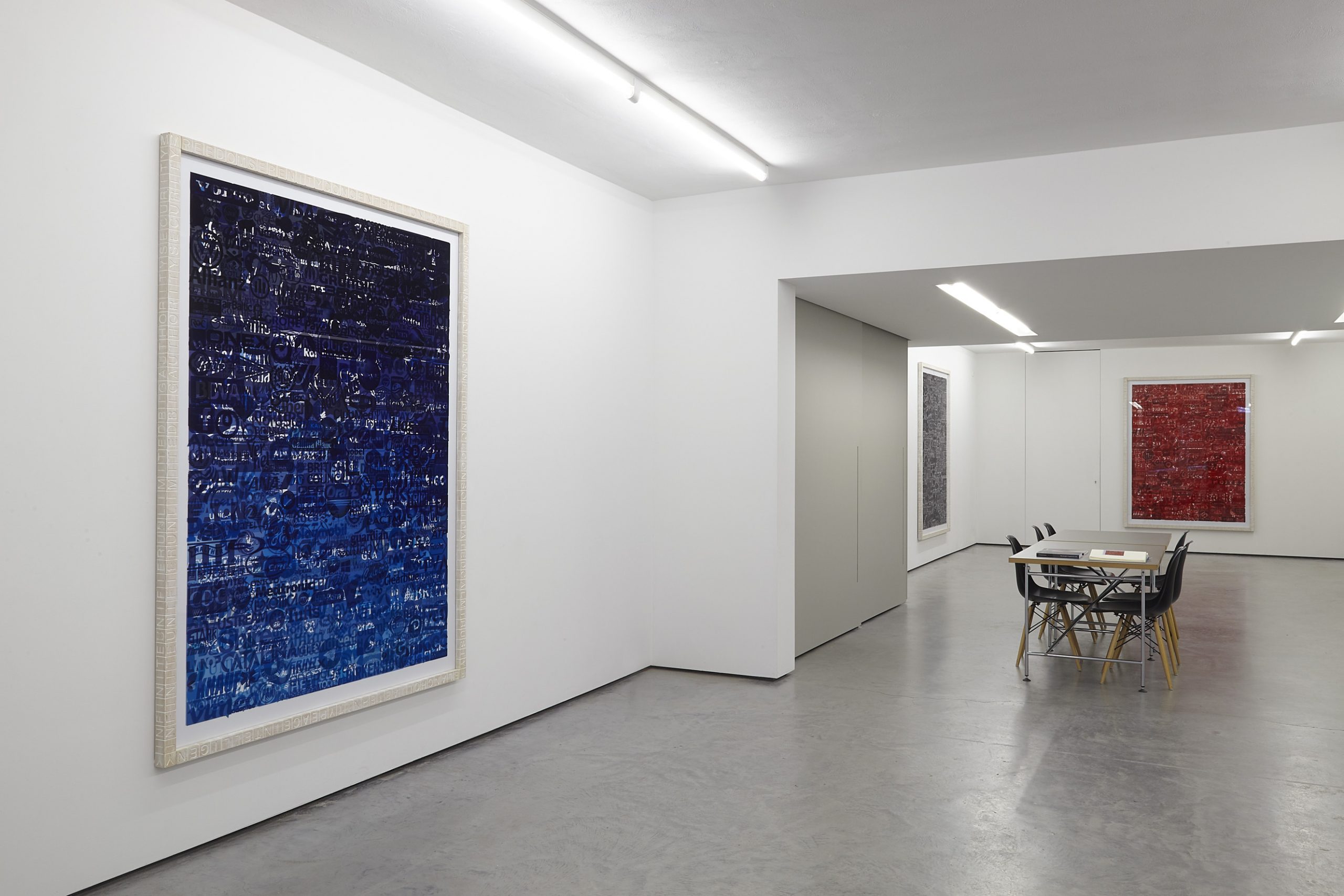 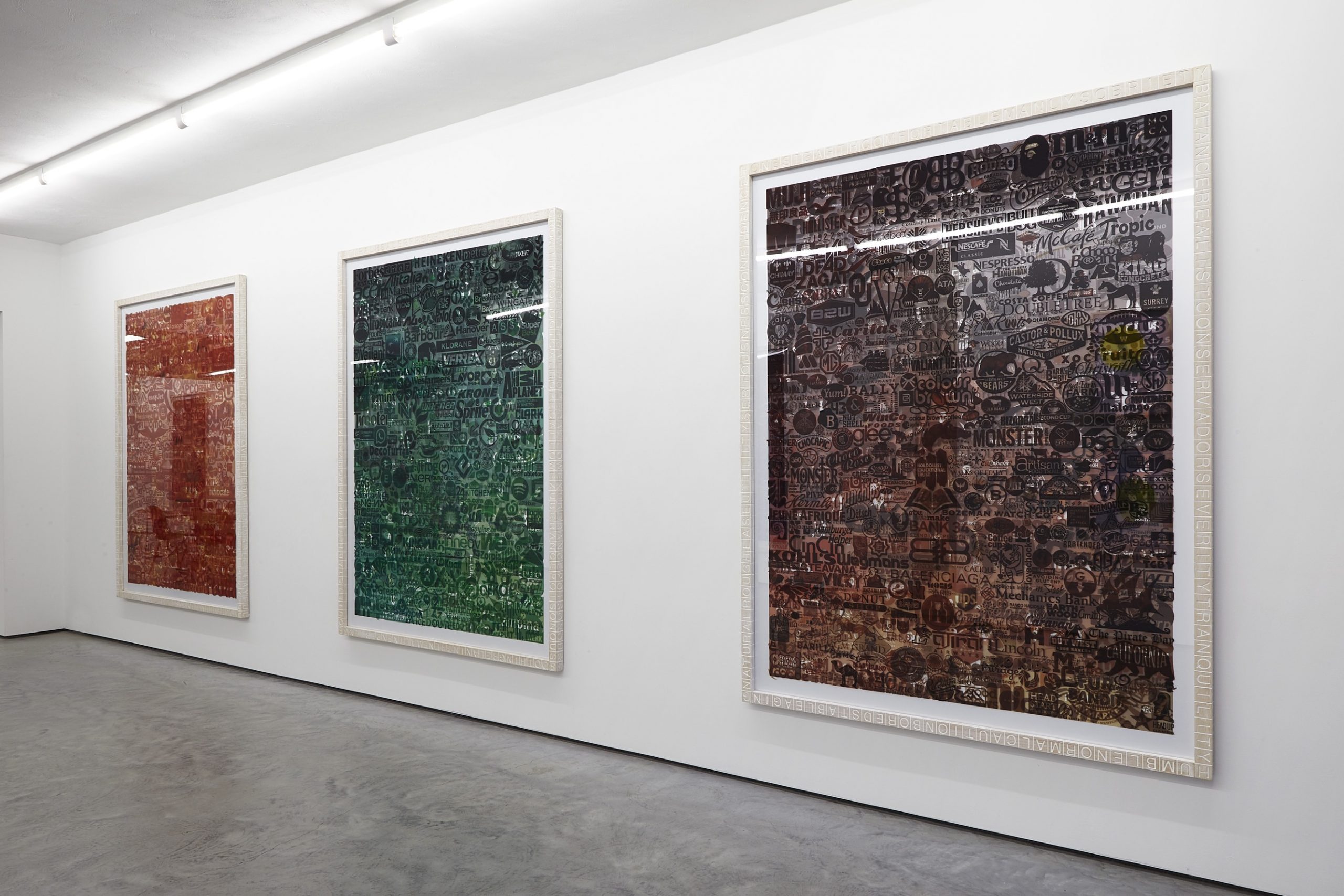 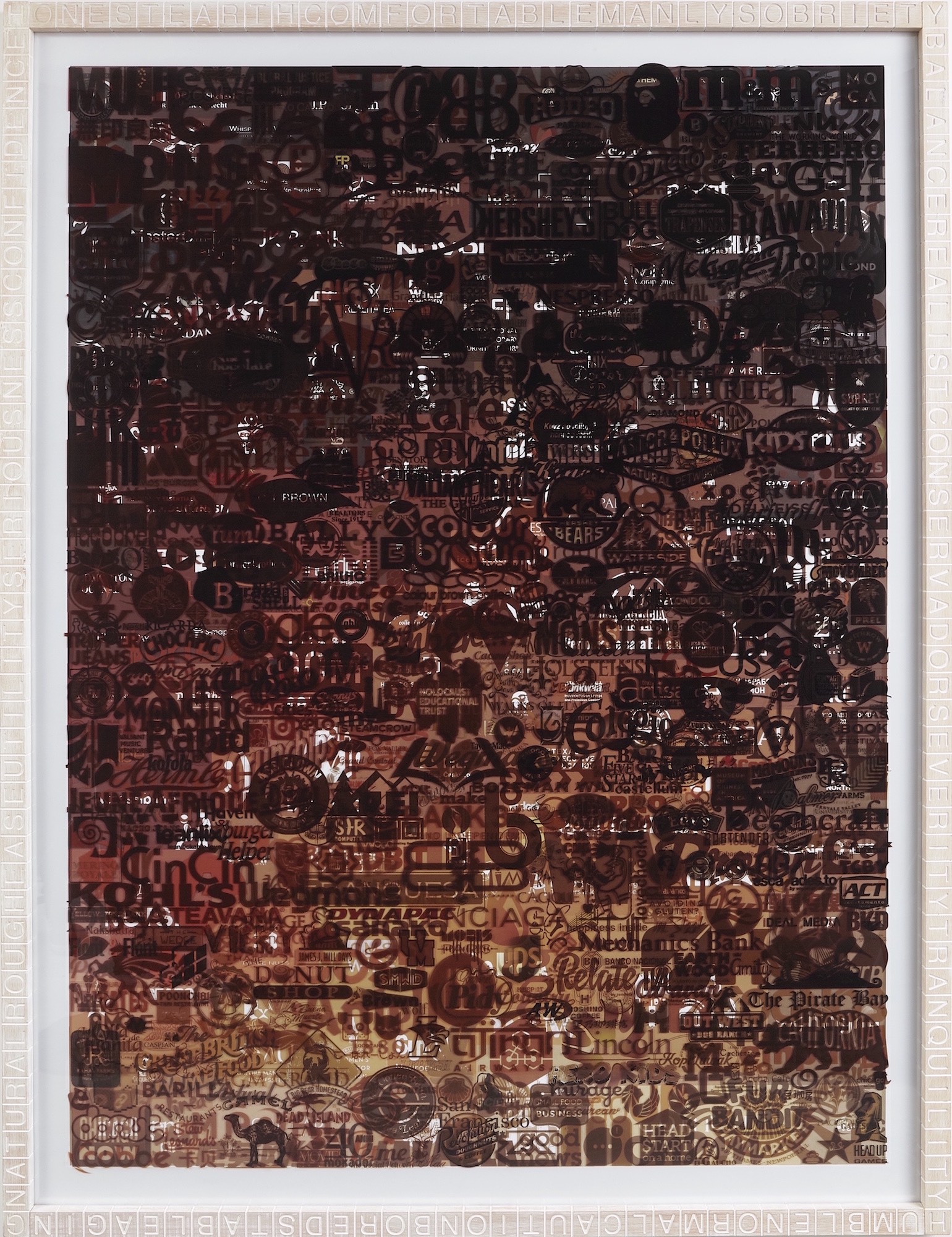 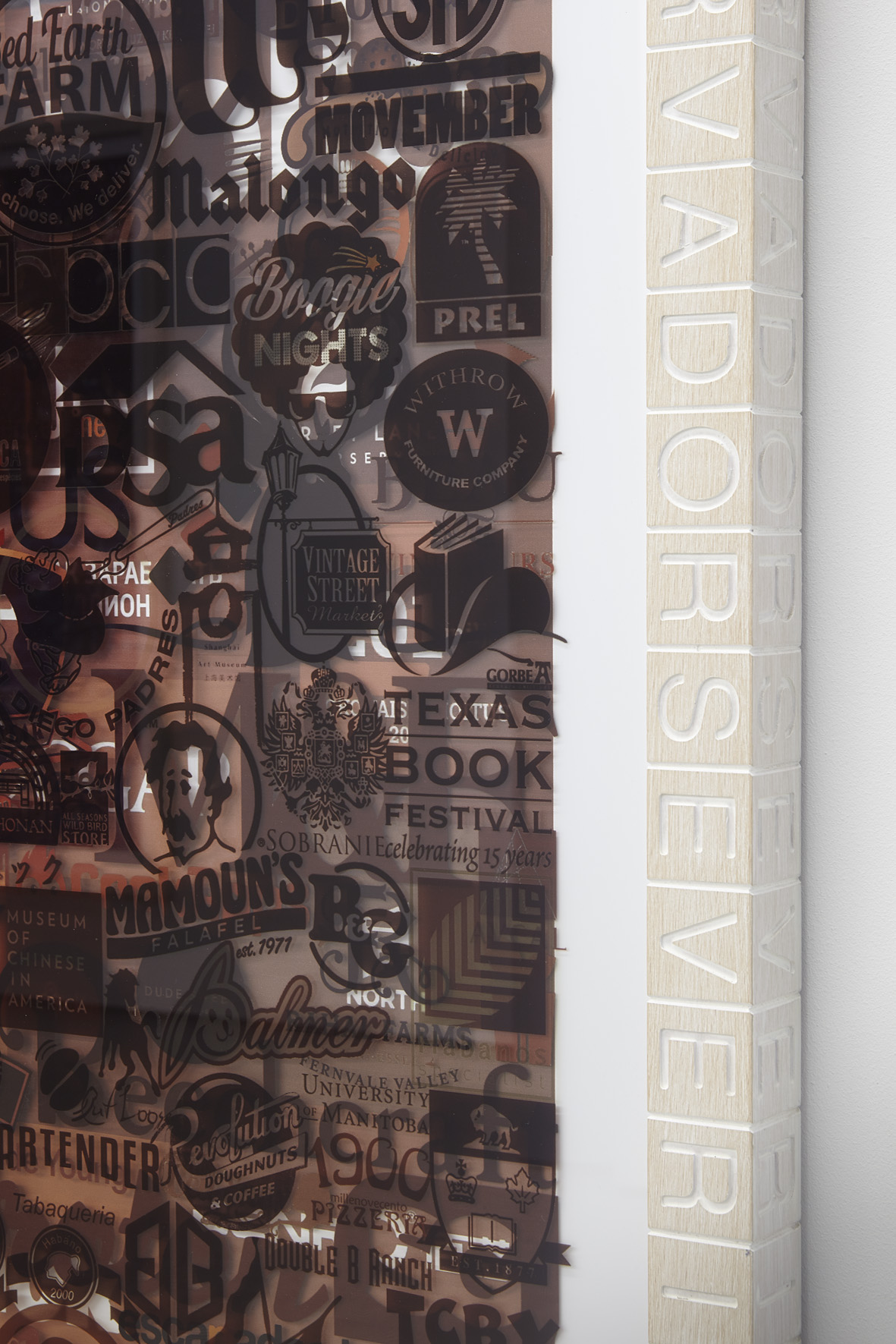 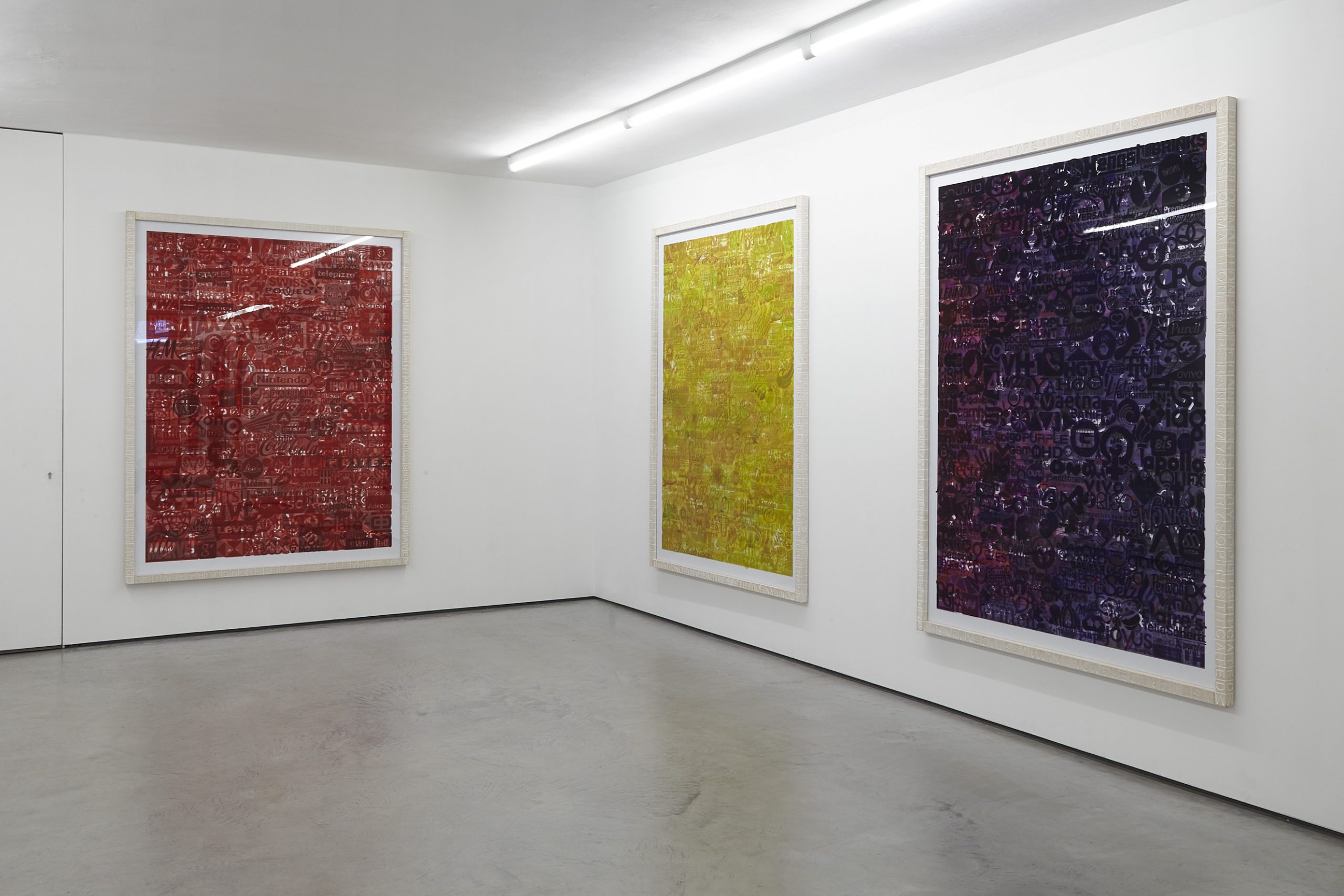 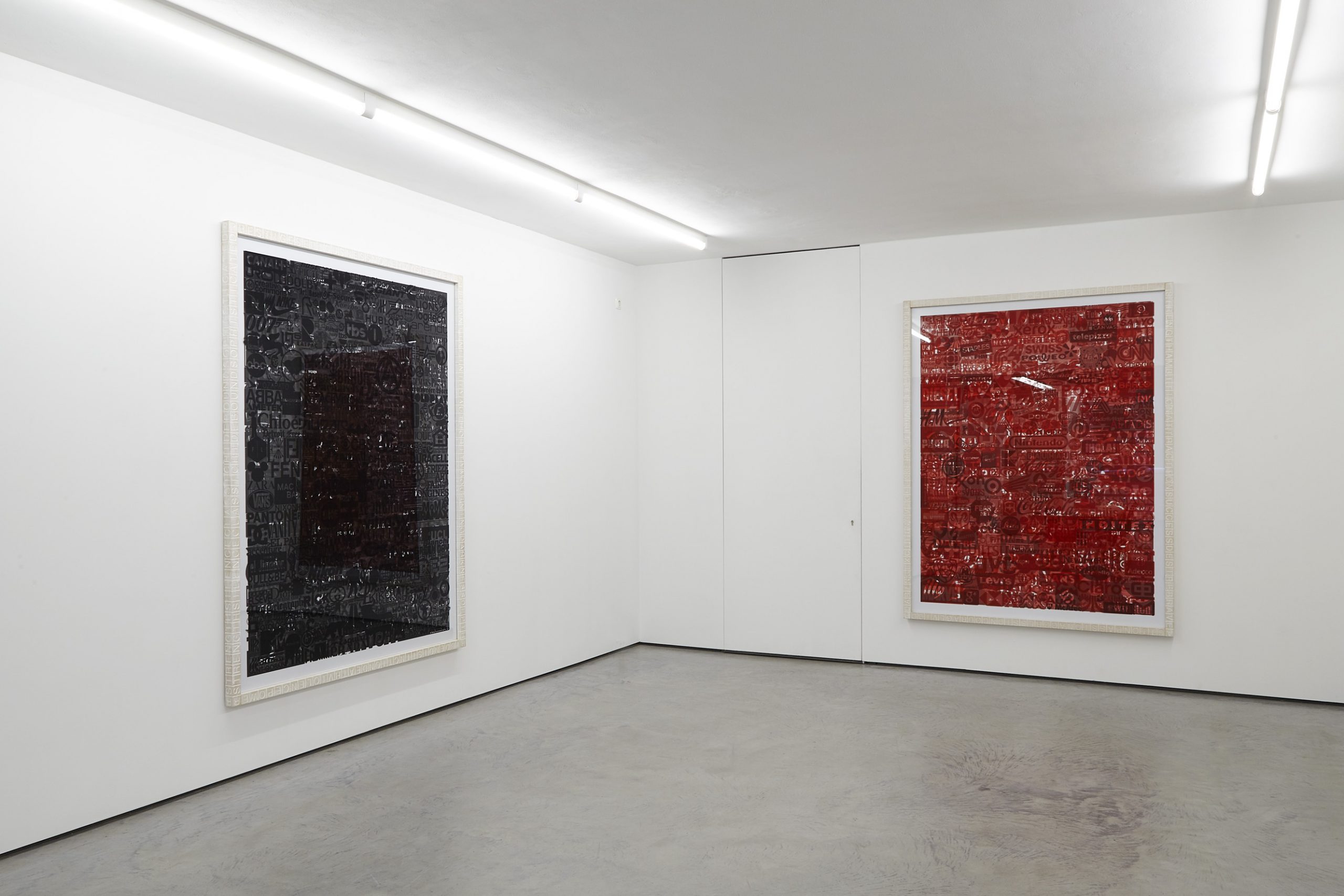 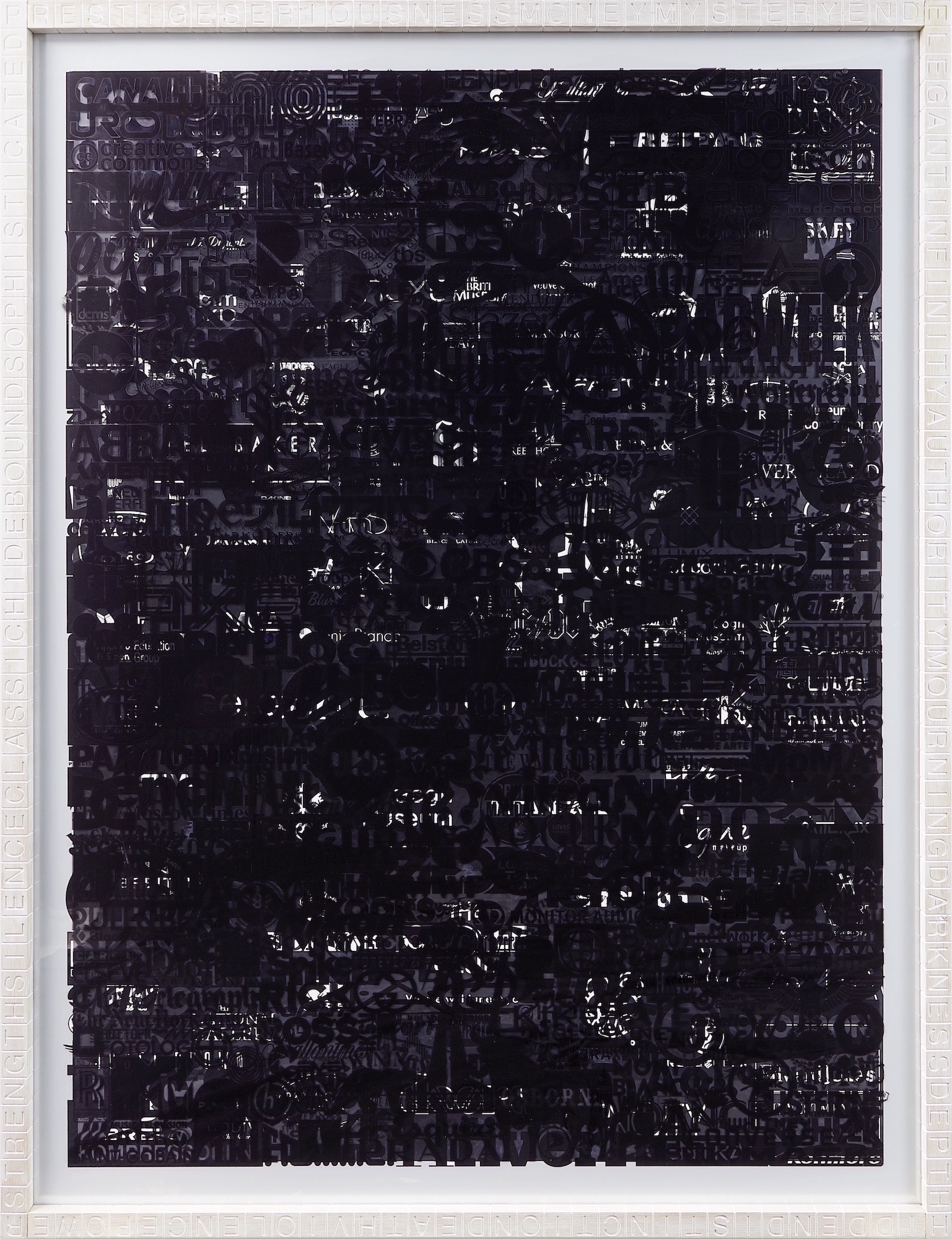 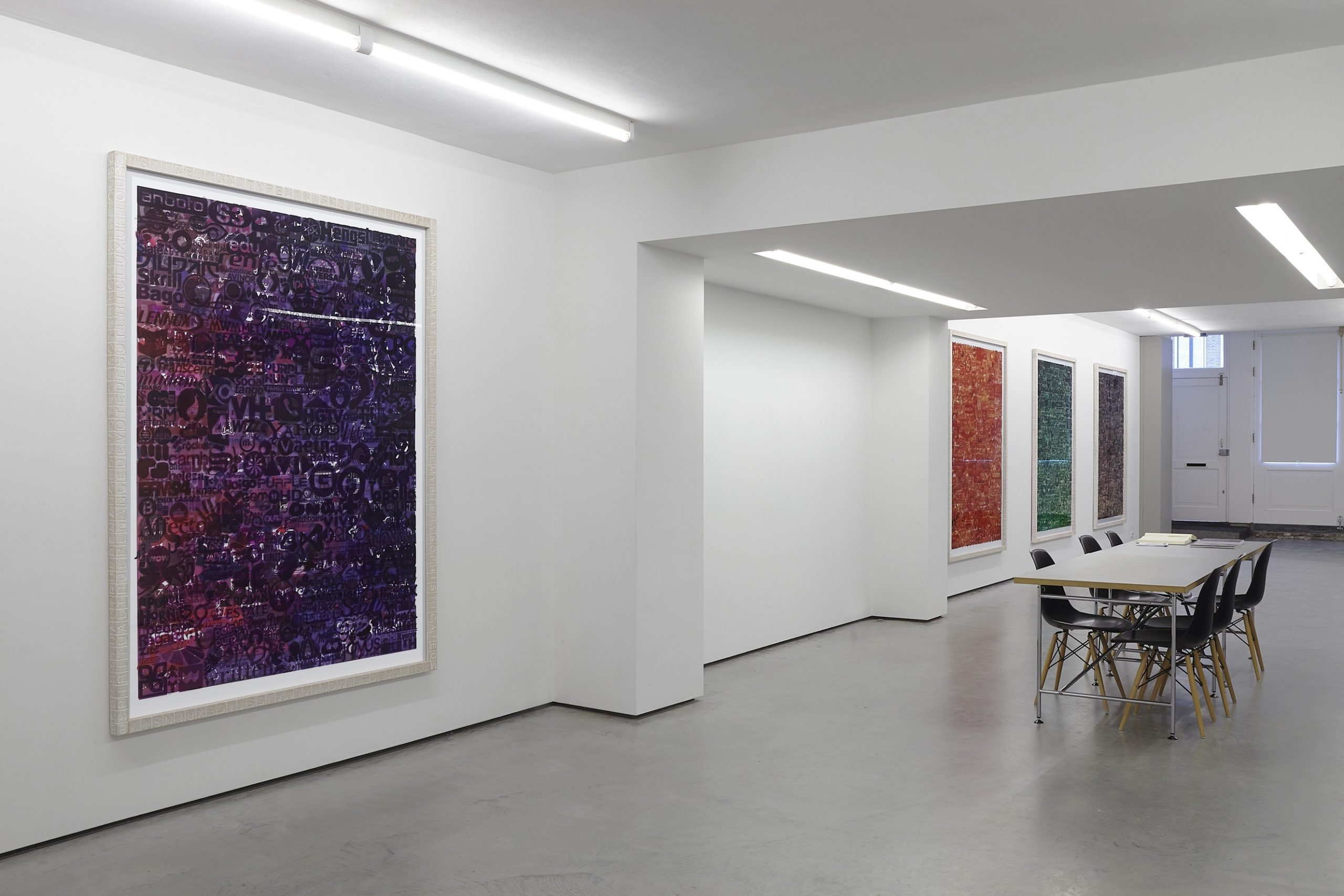 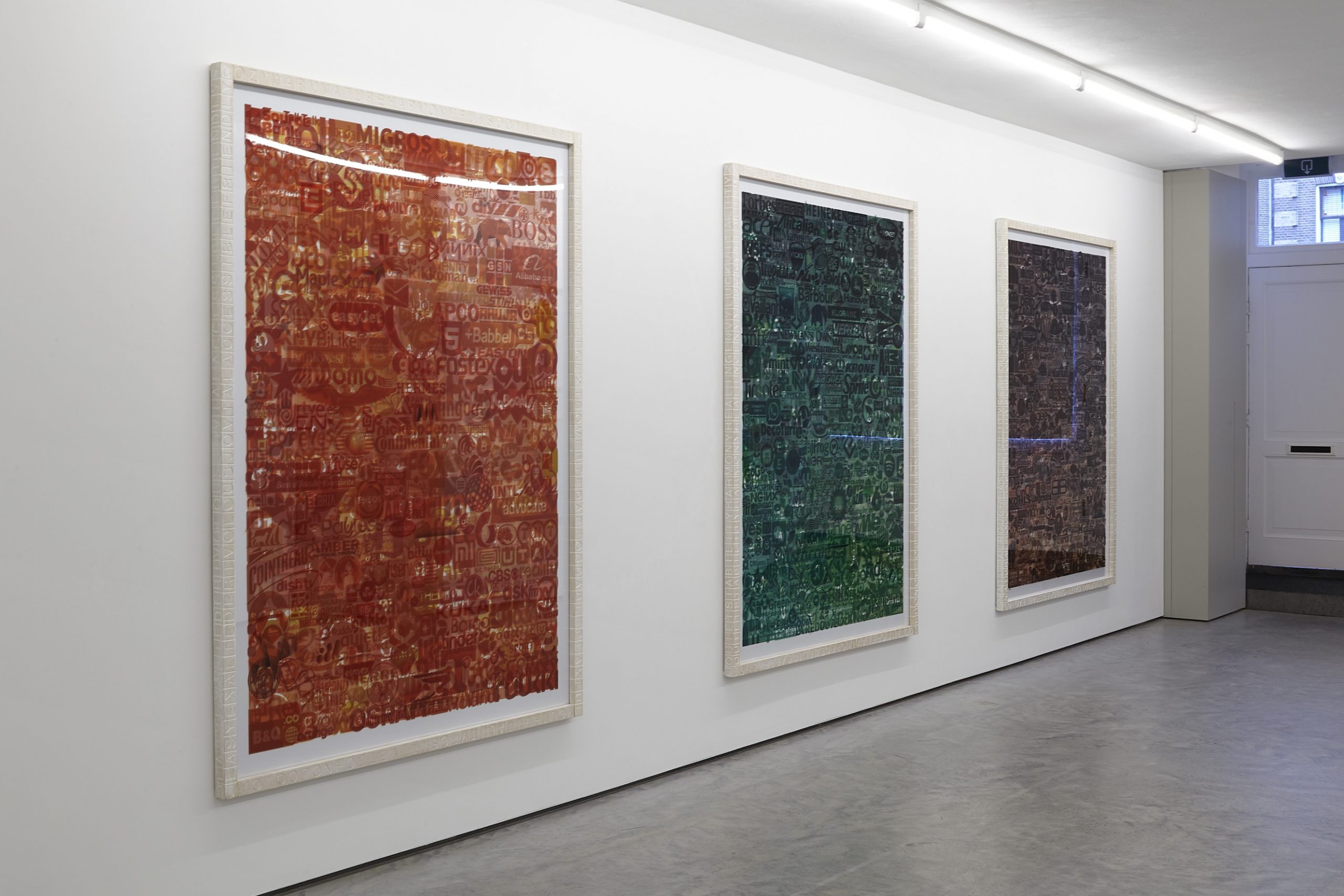 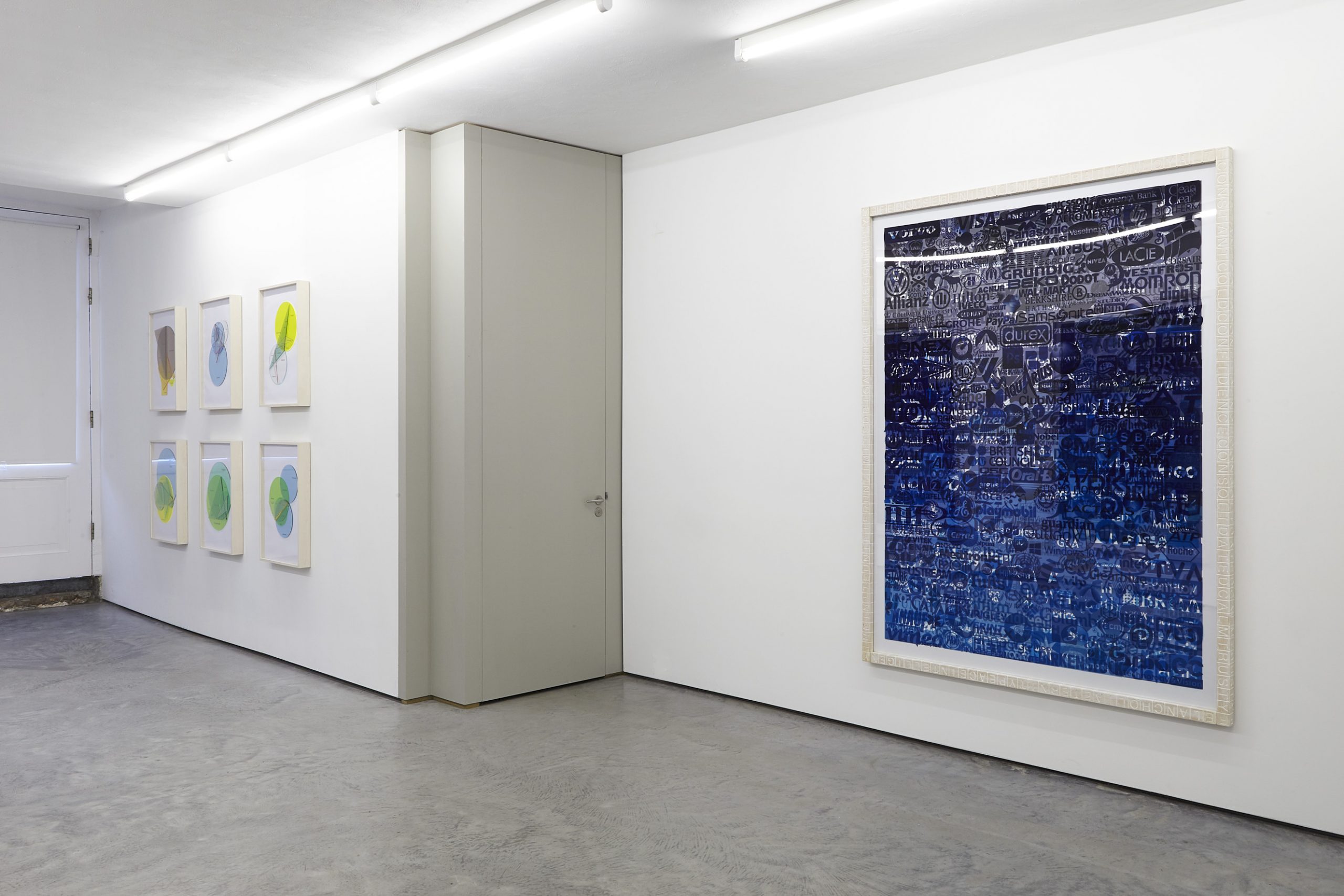 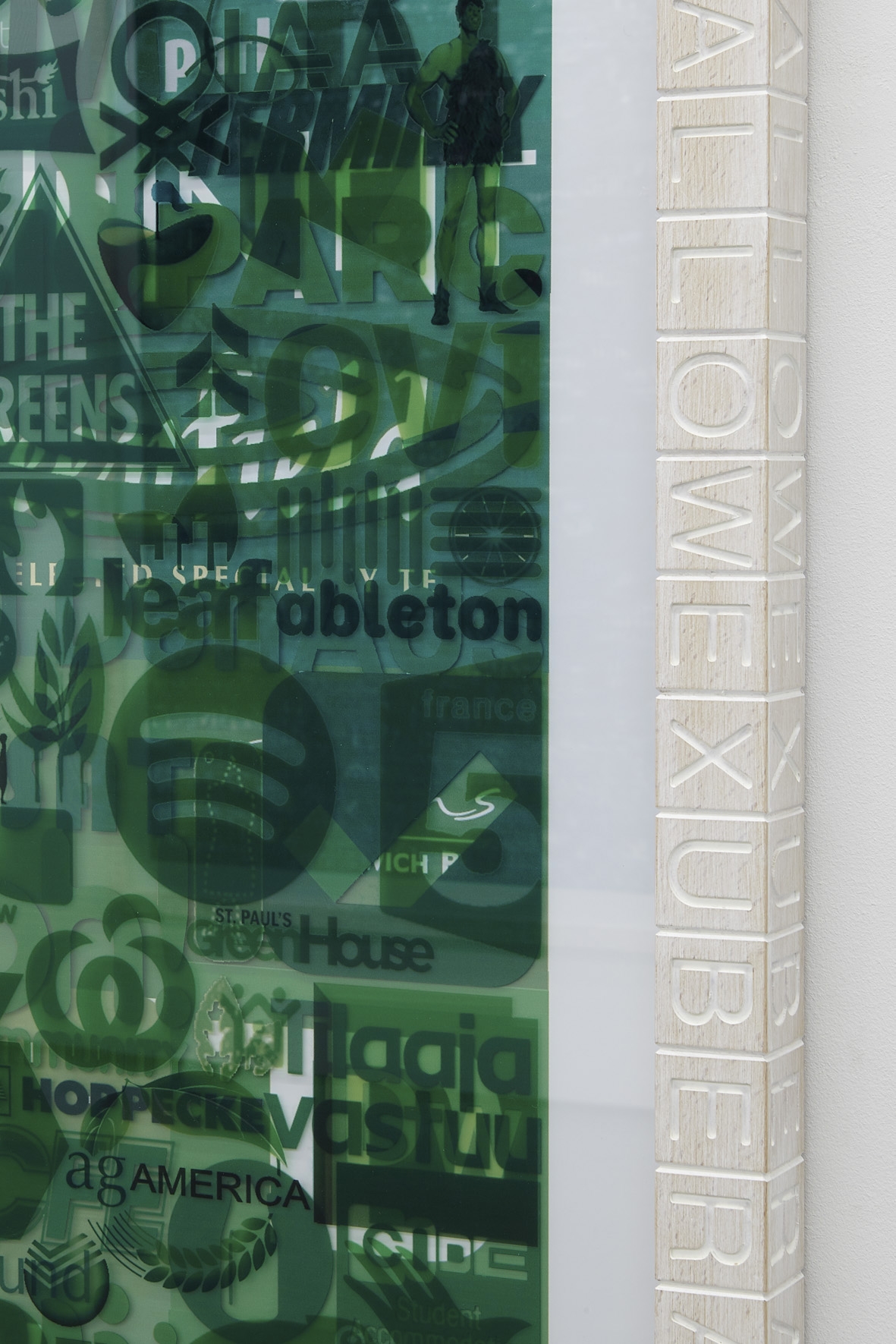 What do ING, Easyjet, Osram, Cointreau, Elmex, Tango and Knoll have in common? The color orange! Anyone looking at Cristina Lucas’s  work ‘Orange’ from a distance sees a surface of basically solid, warm orange. From a closer proximity the orange breaks up into words and marks. These are business logos, each in a different shade of orange. Hundreds of such logos have been printed onto perspex and overlapped with each other in various layers, thus causing all of the nuances of orange to merge into a monochrome when viewed at a distance.

In the seventeenth century Isaac Newton used a prism in order to refract, to break up as it were, a ray of light. He transformed this spectrum of light, ranging from red to violet, going clockwise) into a color wheel. In her series ‘Monochromes’ (2016-2017) Cristina Lucas (1973, Jaén, ES) adds grey, brown and black to the colors of Newton’s rainbow. By doing so she expands upon a classic issue in art, that of the perception of color.

Kandinsky, a representative of the early twentieth-century avant-garde, departed from the notion that every color speaks a language of its own, has its own expressive value; inherent in each color is a form and a soul. The relationship between color and form, their interdependence, played in his view a crucial role in the generation of an aesthetic experience that focused on the spiritual. To Kandinsky, and to the other avant-garde artists, the aim of art was to change the world and the human condition.

Nowadays, as colors are being hijacked by businesses using them for their marketing strategies aimed at profit, what is happening to color and to the aesthetic experience? A good logo is synonymous with a company’s identity, and the color of that logo represents a ‘value’, or rather a ‘mood’. Red, for instance, suggests energy and dynamism; the color green is associated with nature.

In the series ‘Monochromes’ Lucas analyzes and classifies the language of colors that she has taken from day-to-day life. She does this by collecting thousands of company logos, seen in her surroundings or found on the Internet, and sorting them according to color. Something similar to this also occurs in the series ‘True Truths’: these are ‘exercises’ with geometric forms, based on mathematical axioms, in which the interpretation of the image is influenced by ideas that refer to emotions and attitudes as described in theories from the field of psychology. Essentially, in these stratified works Lucas is showing us the revised codes that can be applied in order to ‘unscramble’ aesthetic elements in the world that surrounds us. The spectrum of our reality is brought to the surface, as it were, by way of colorful digital brushstrokes. These have their origins in our reality, and they guide us to the true meaning of color and form, in the same manner in which we link that to a modern-day subject. The both disconcerting and moving conclusion on seeing the works of Lucas is: these colors, this orange, that’s us!