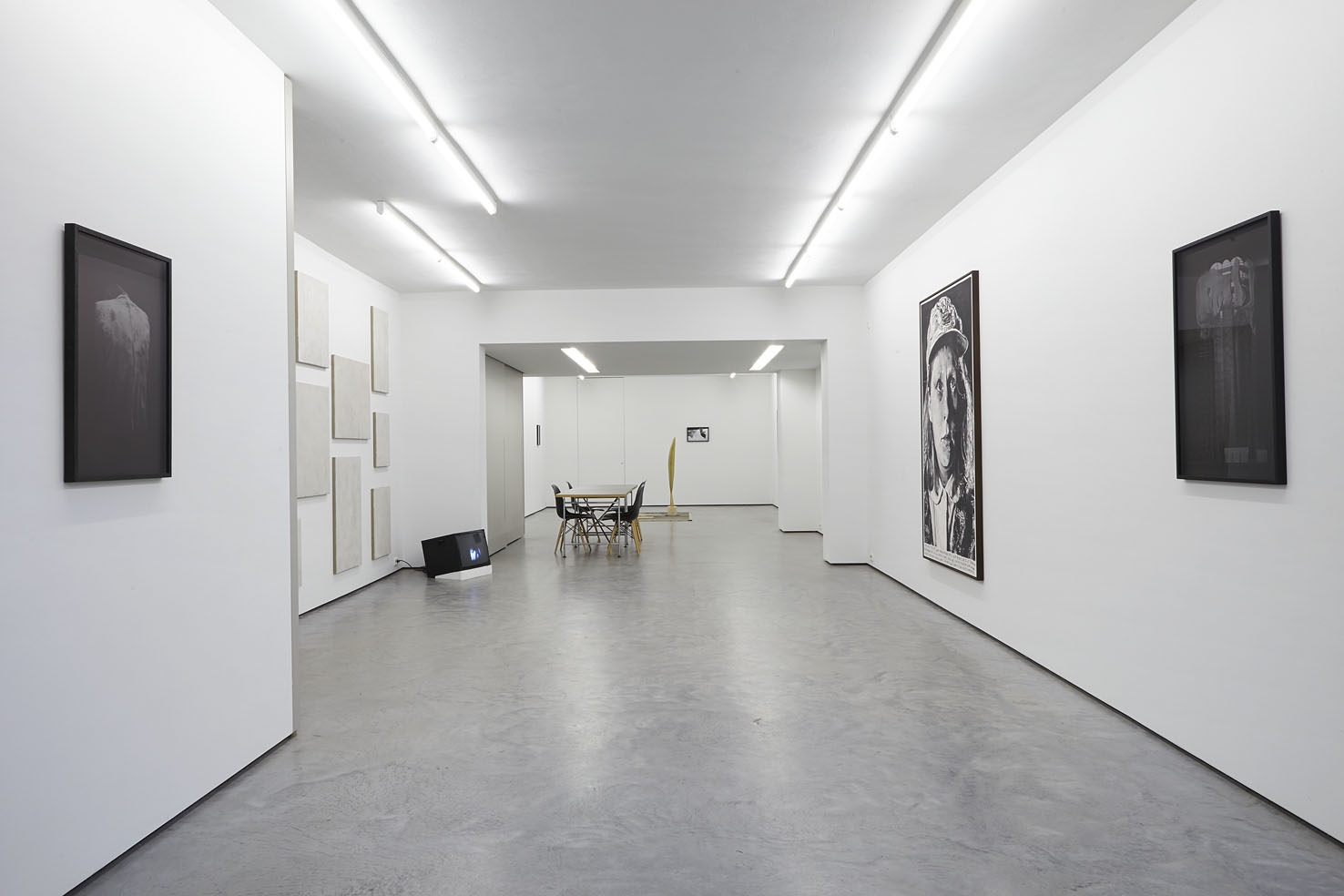 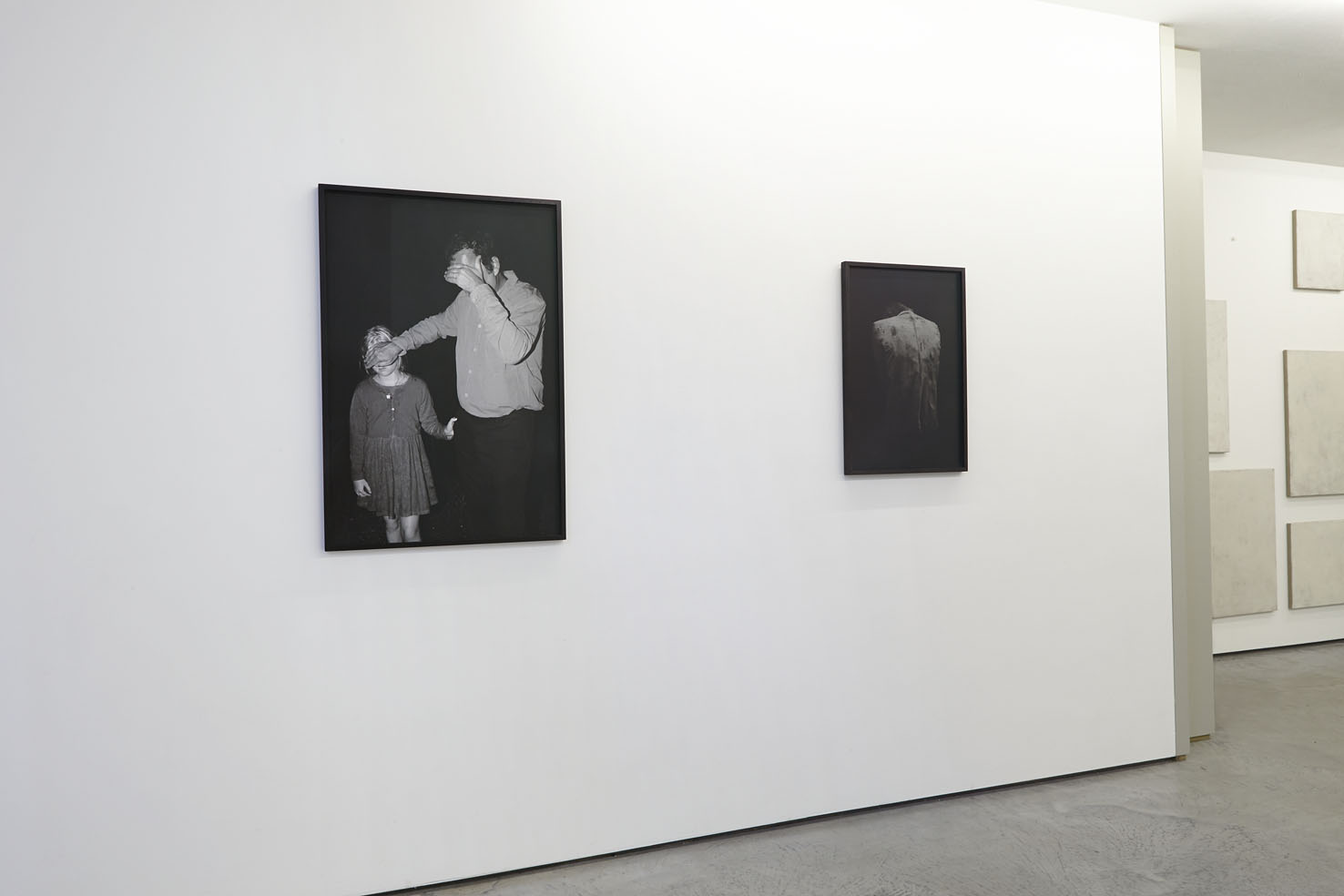 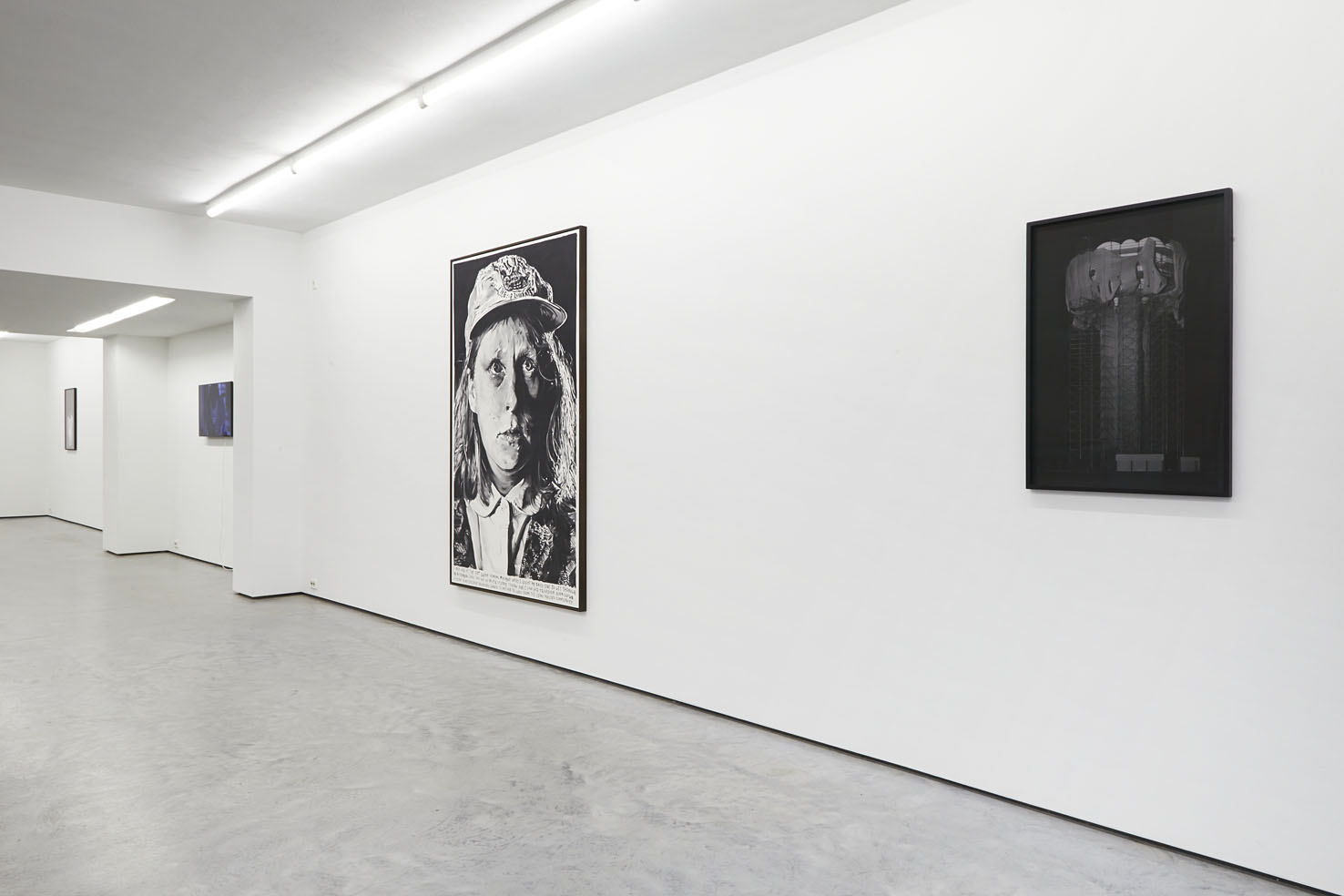 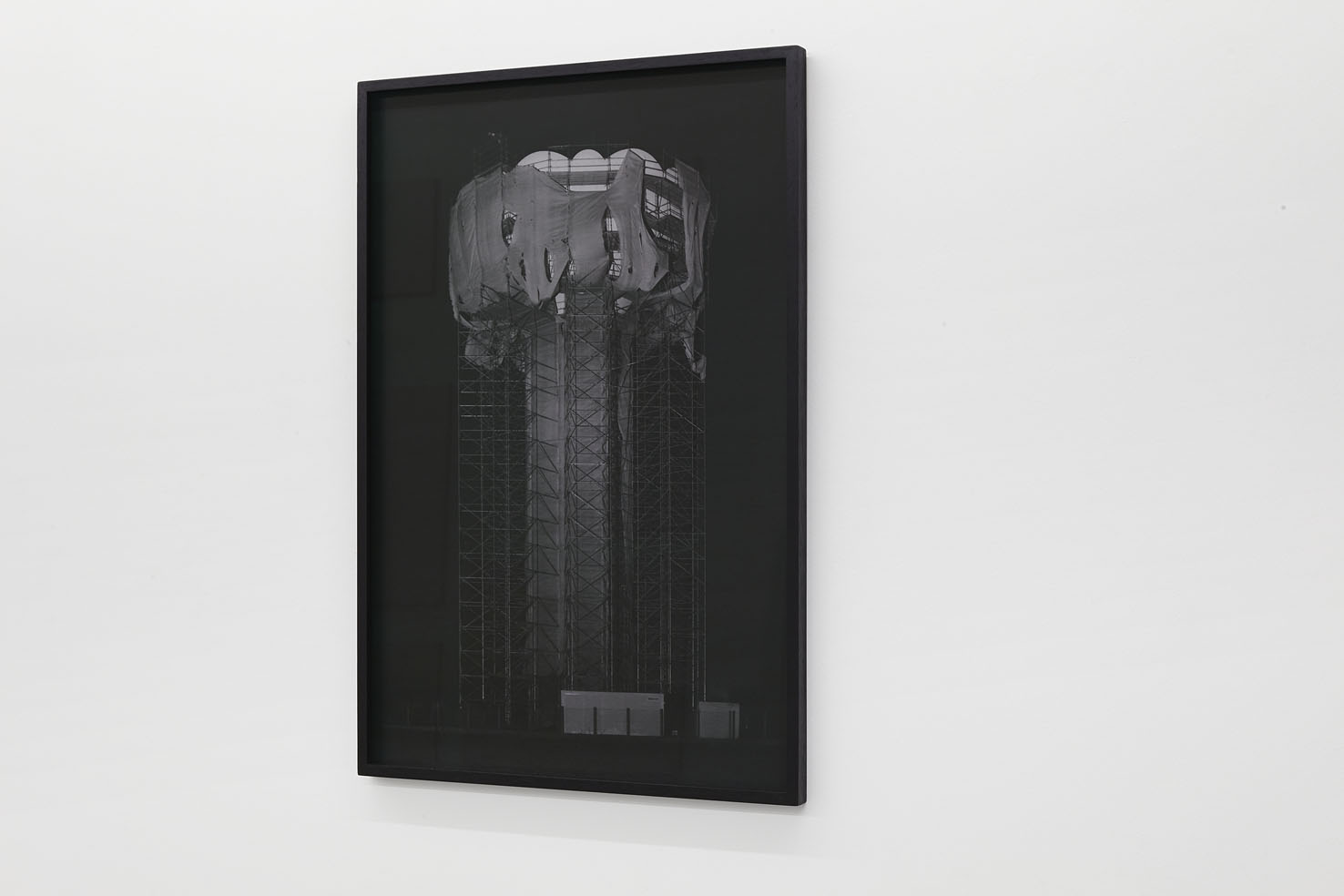 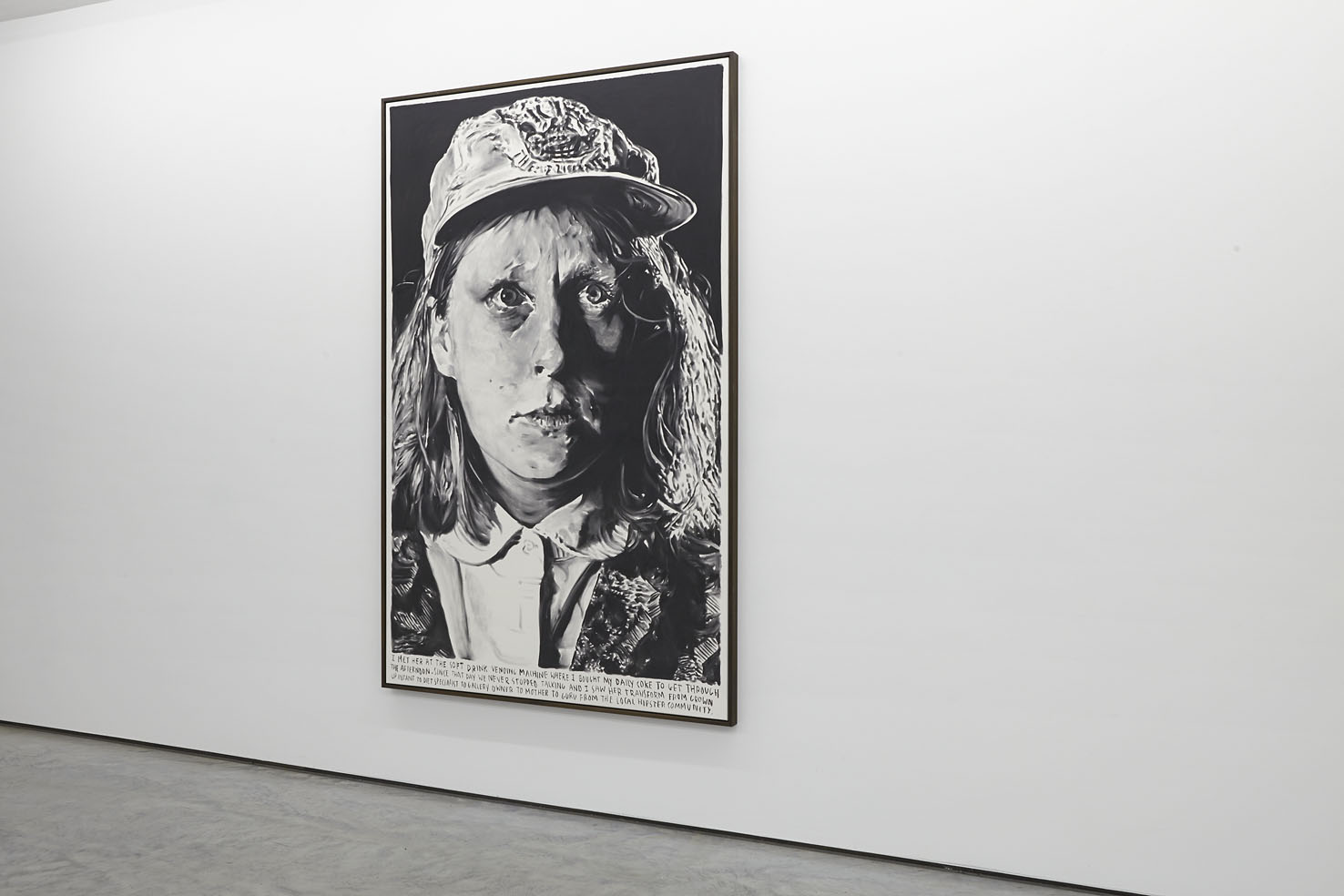 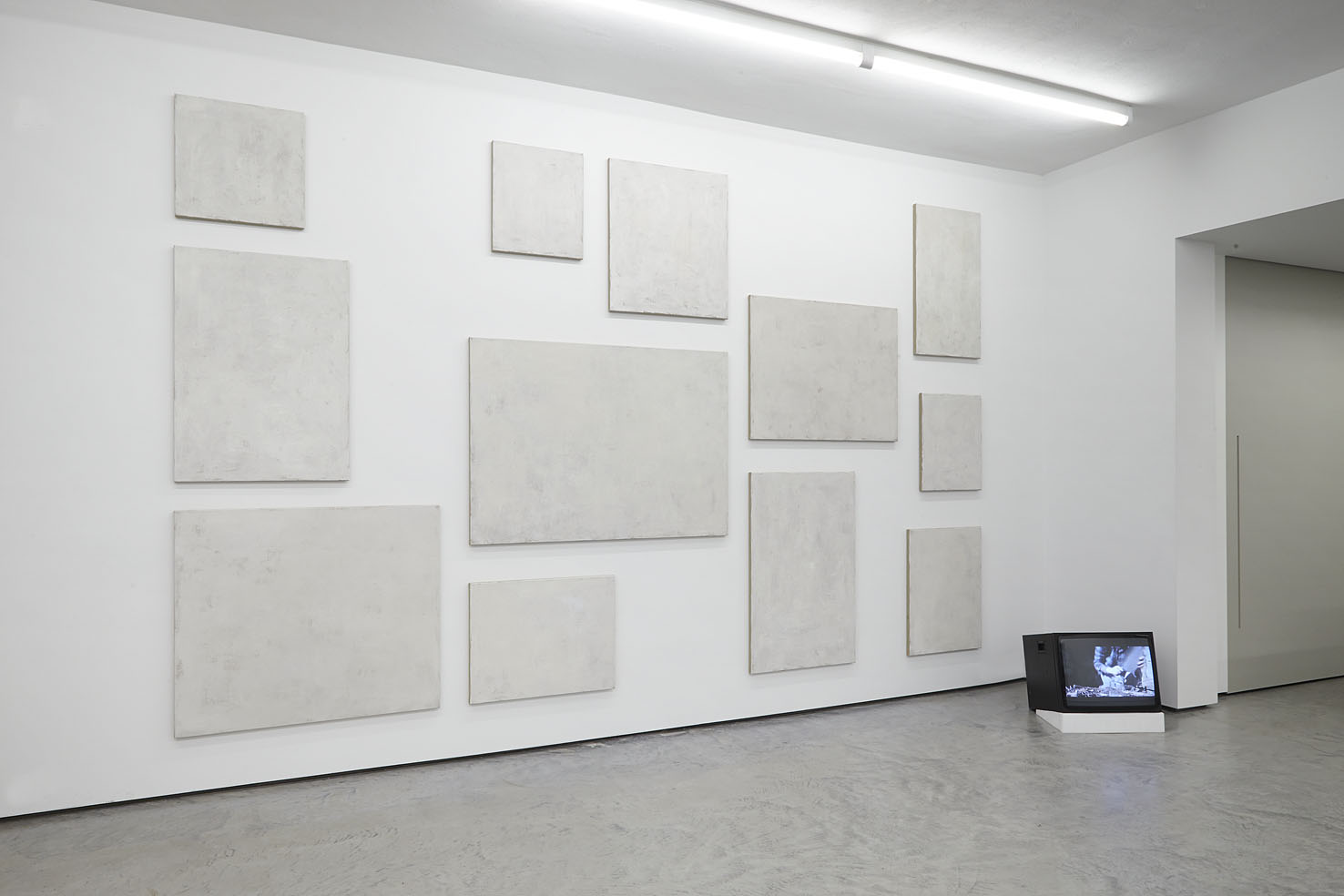 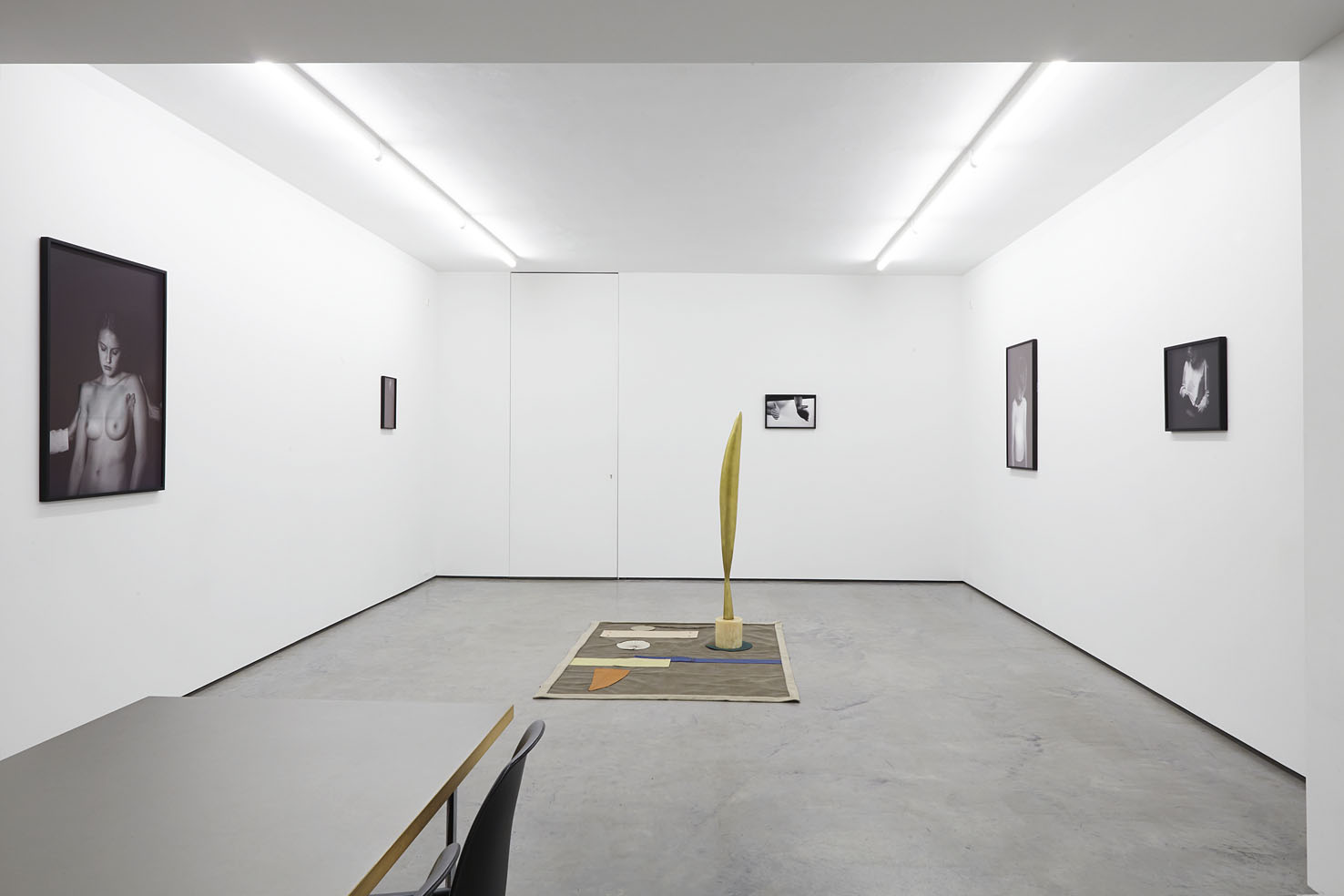 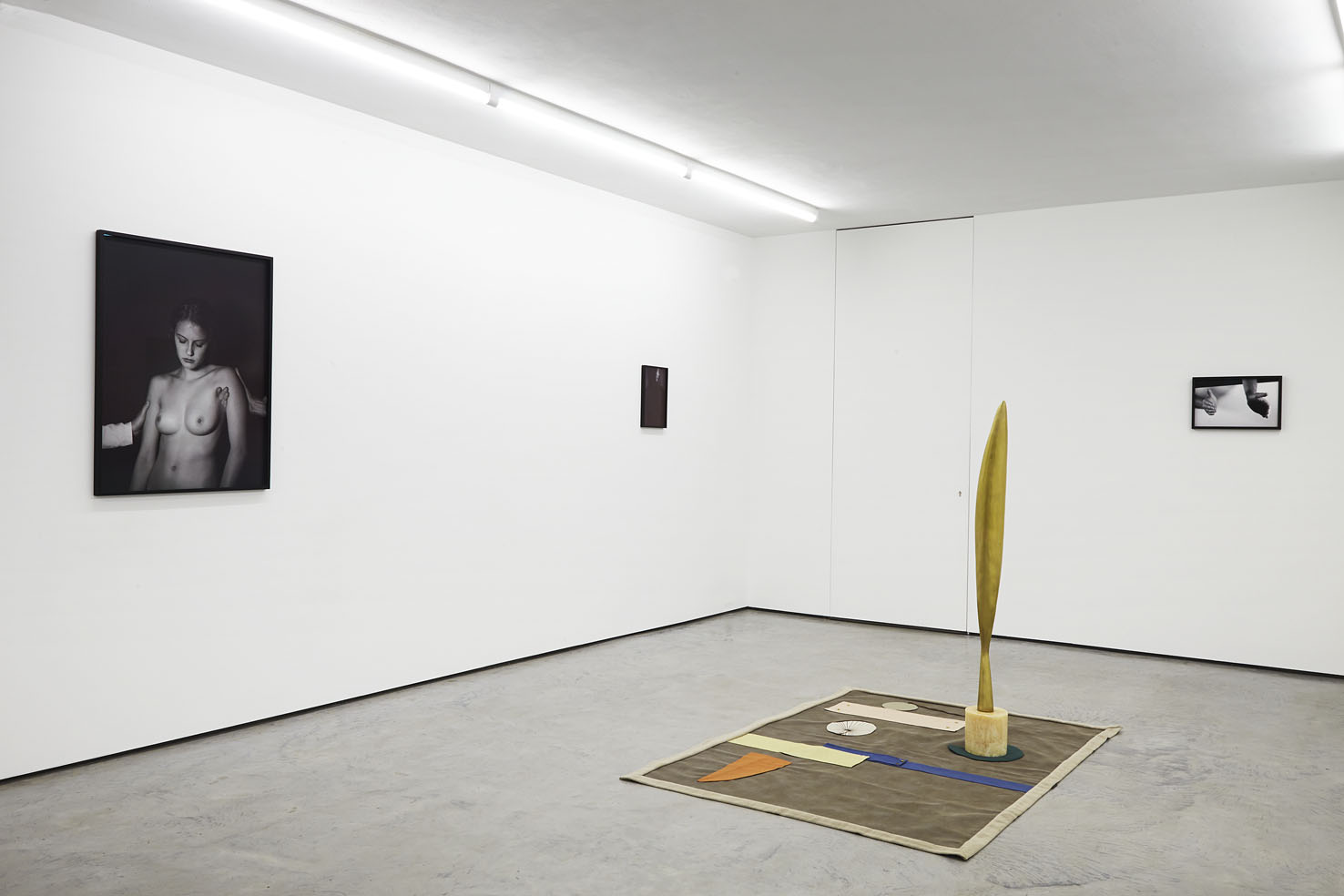 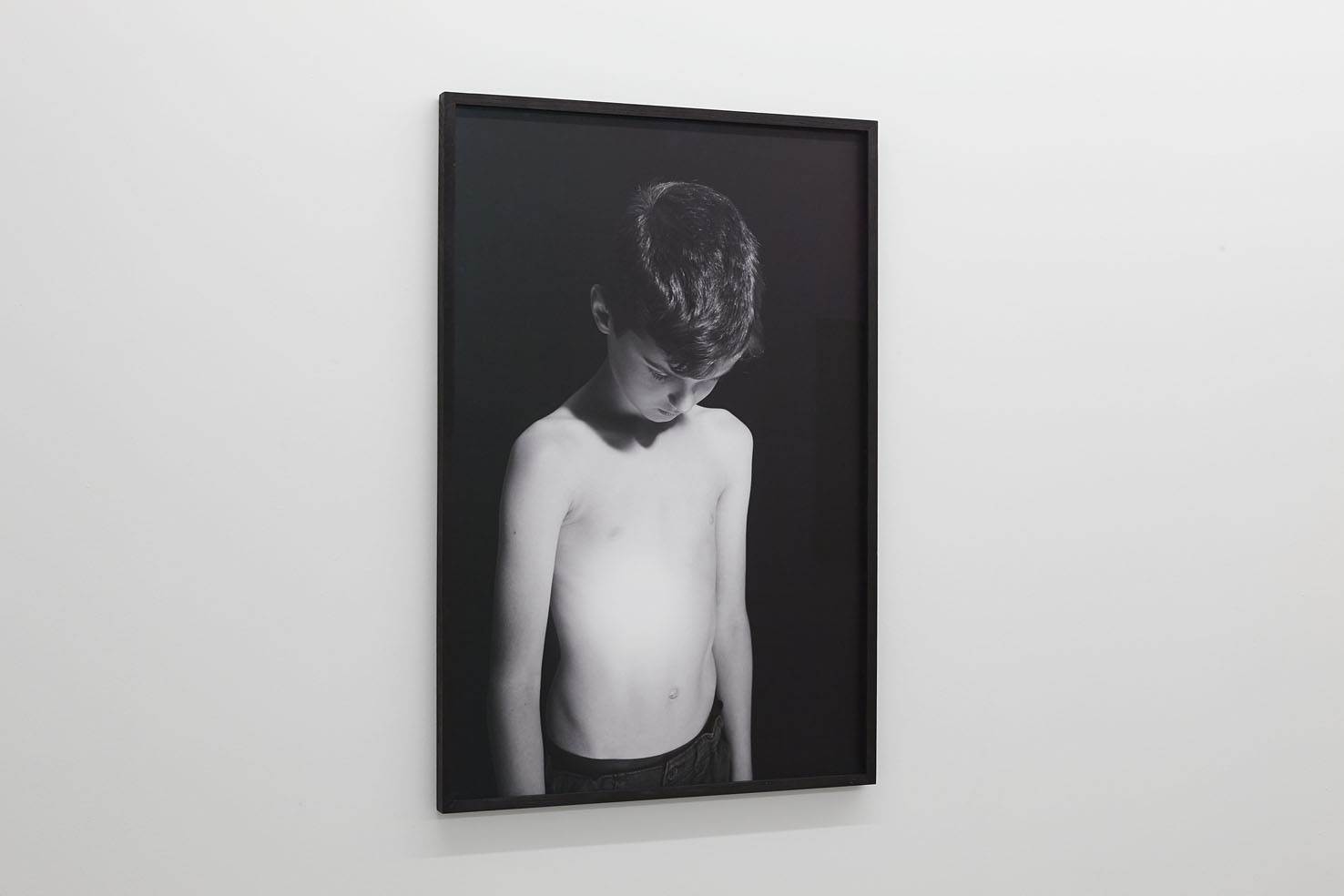 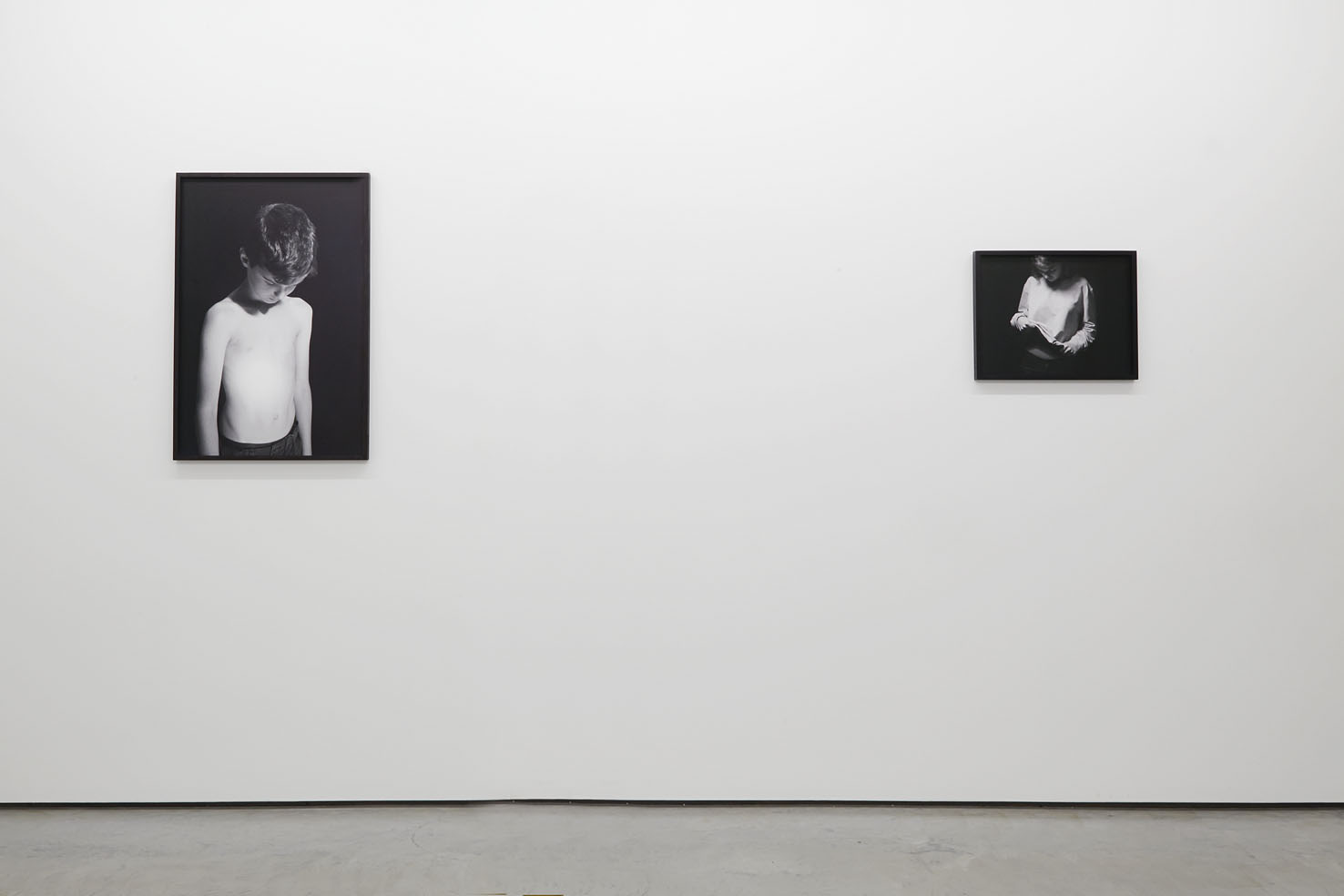 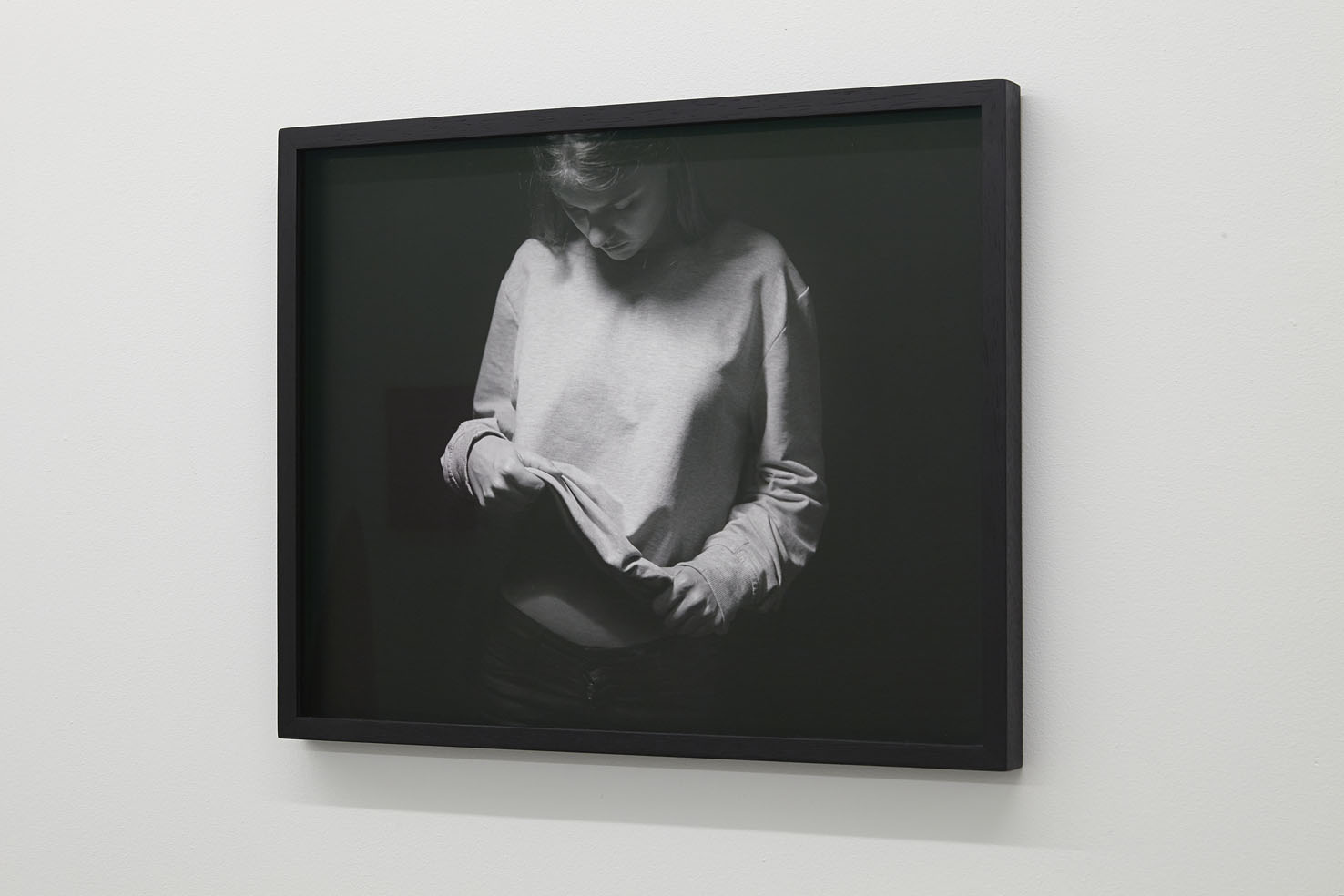 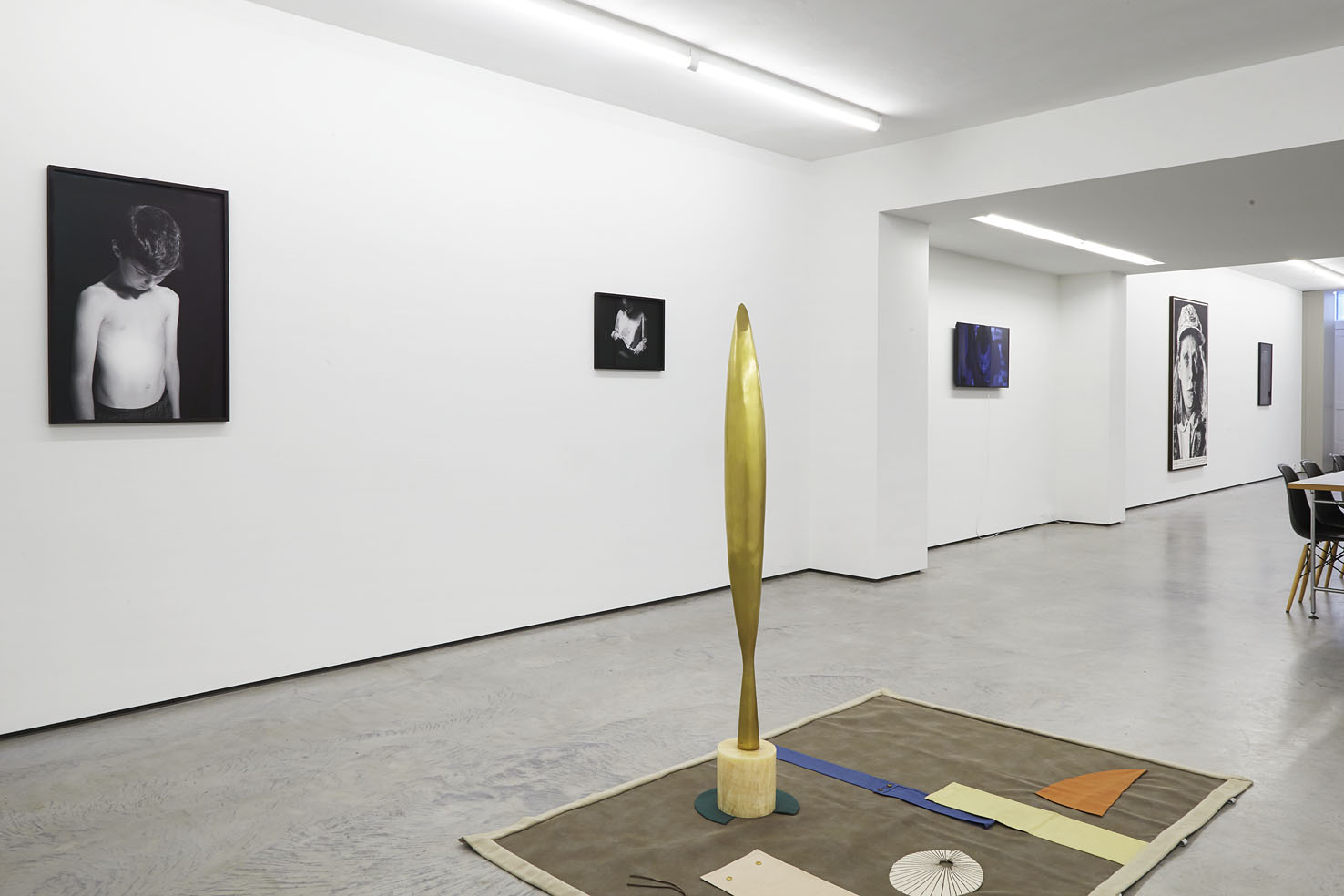 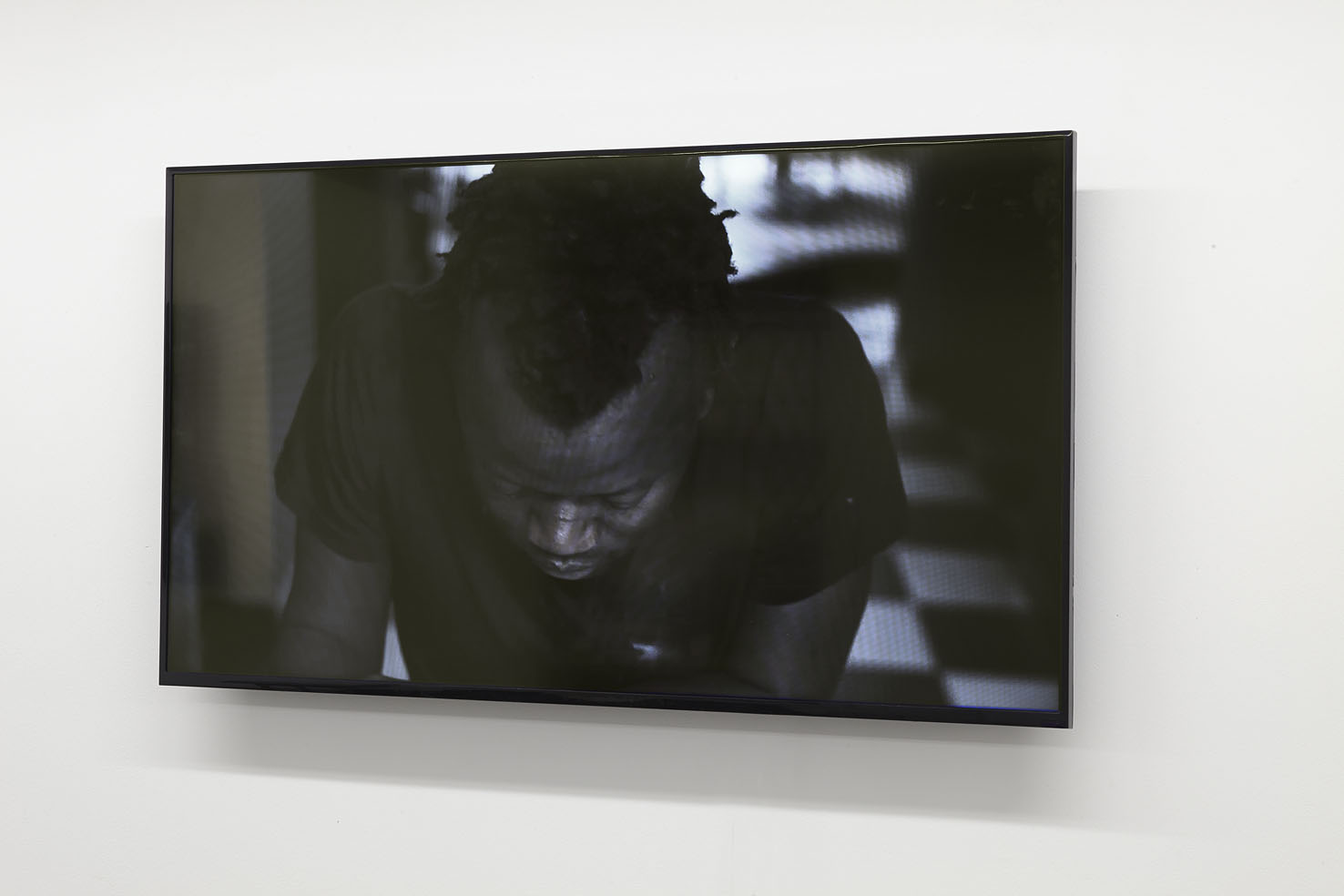 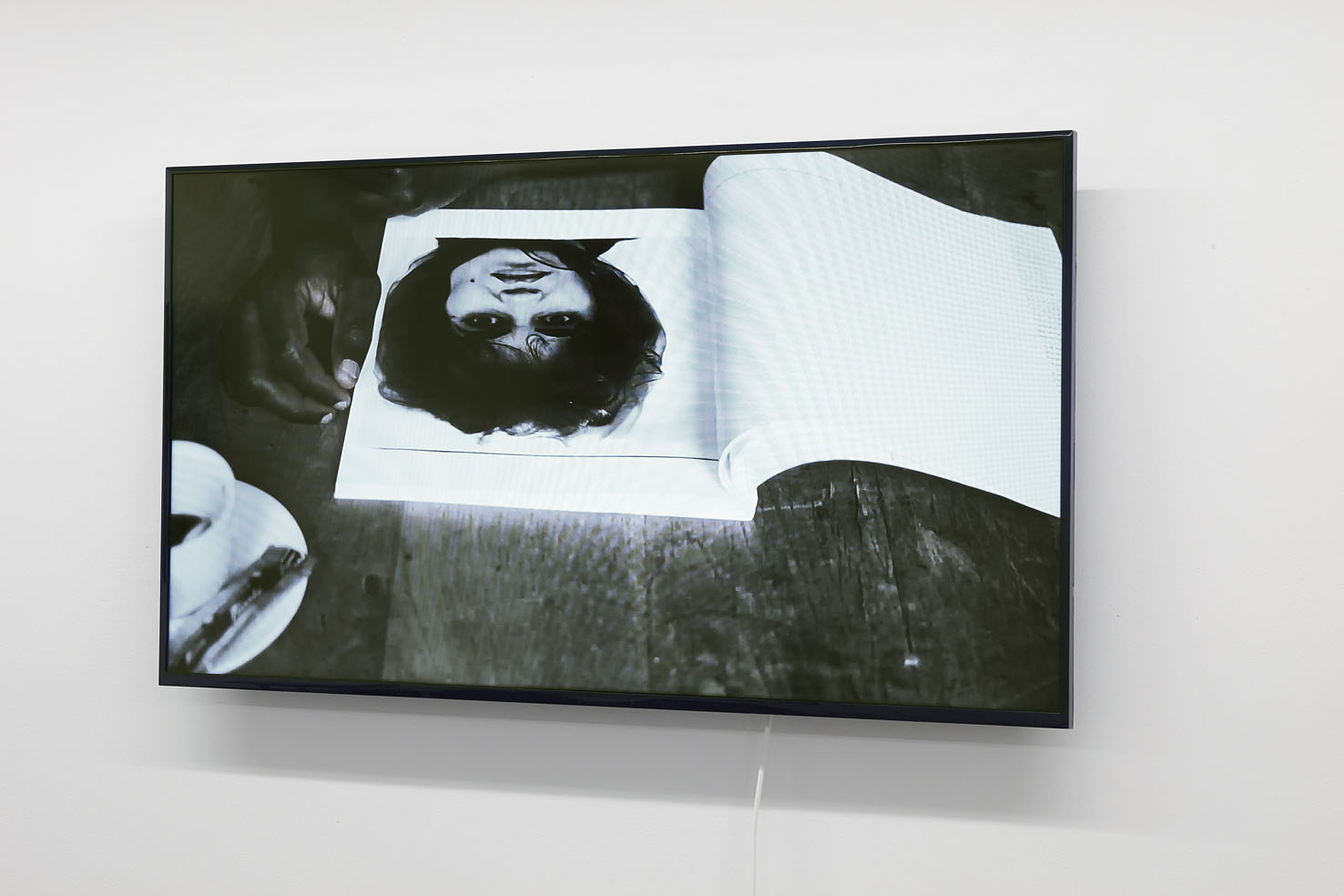 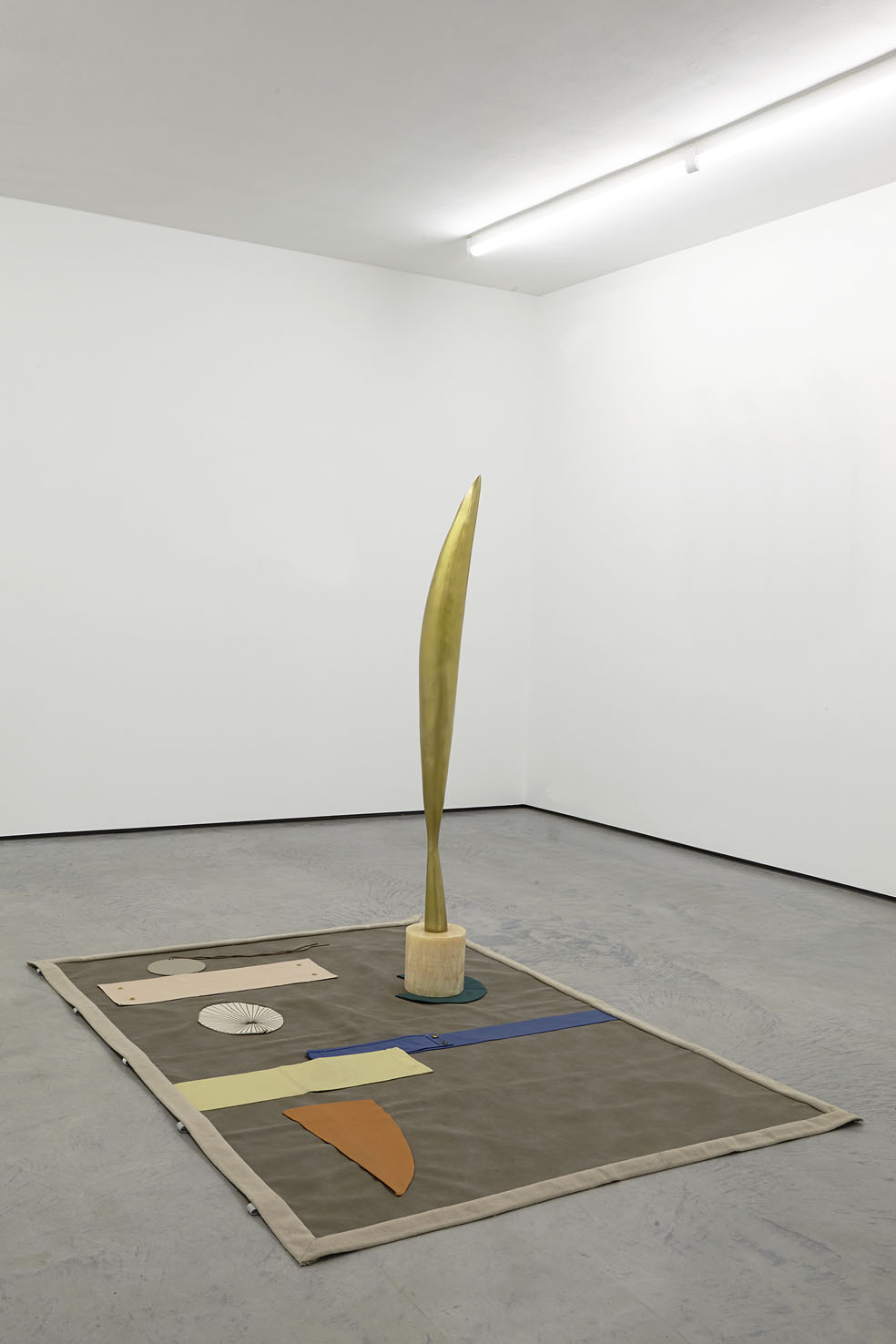 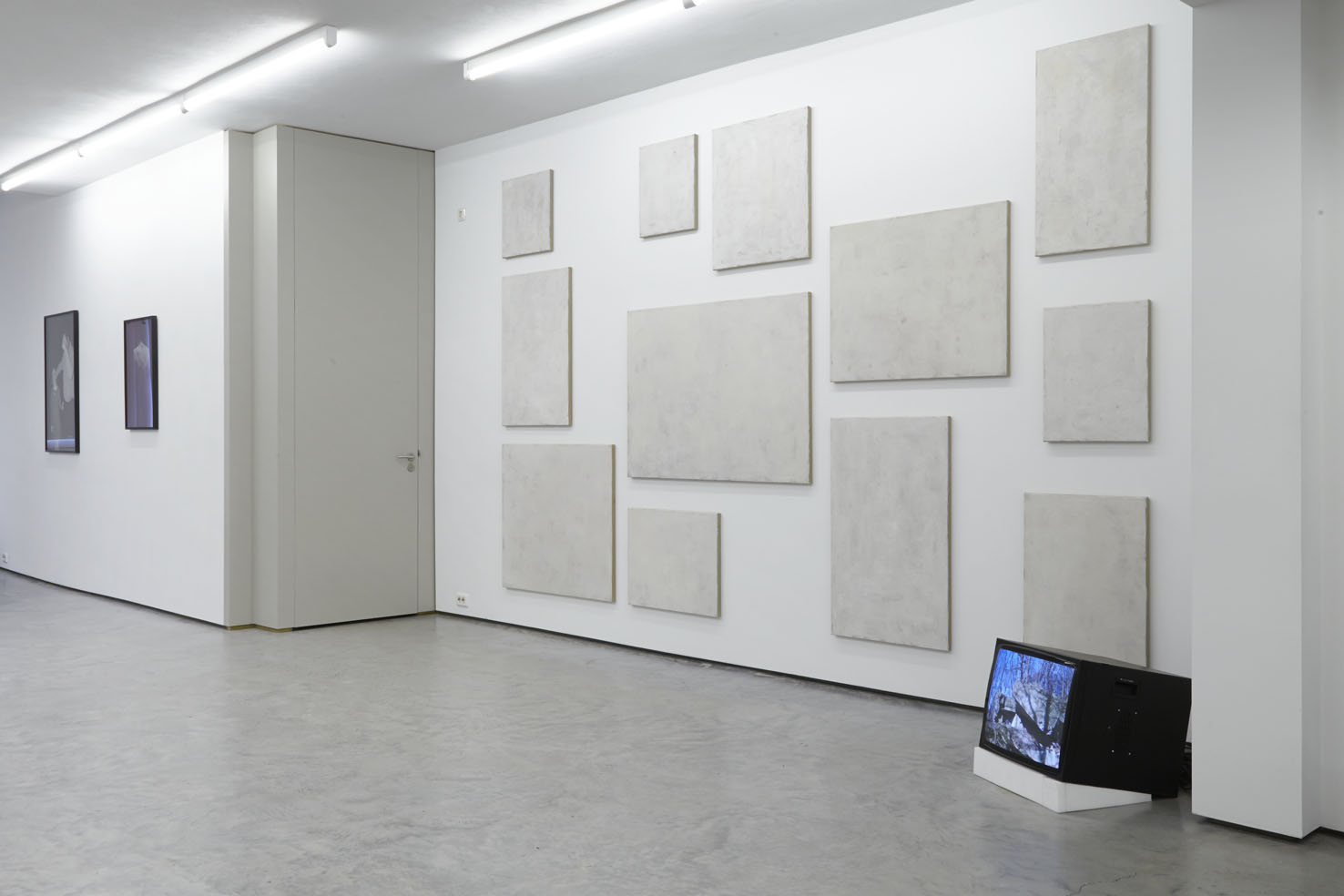 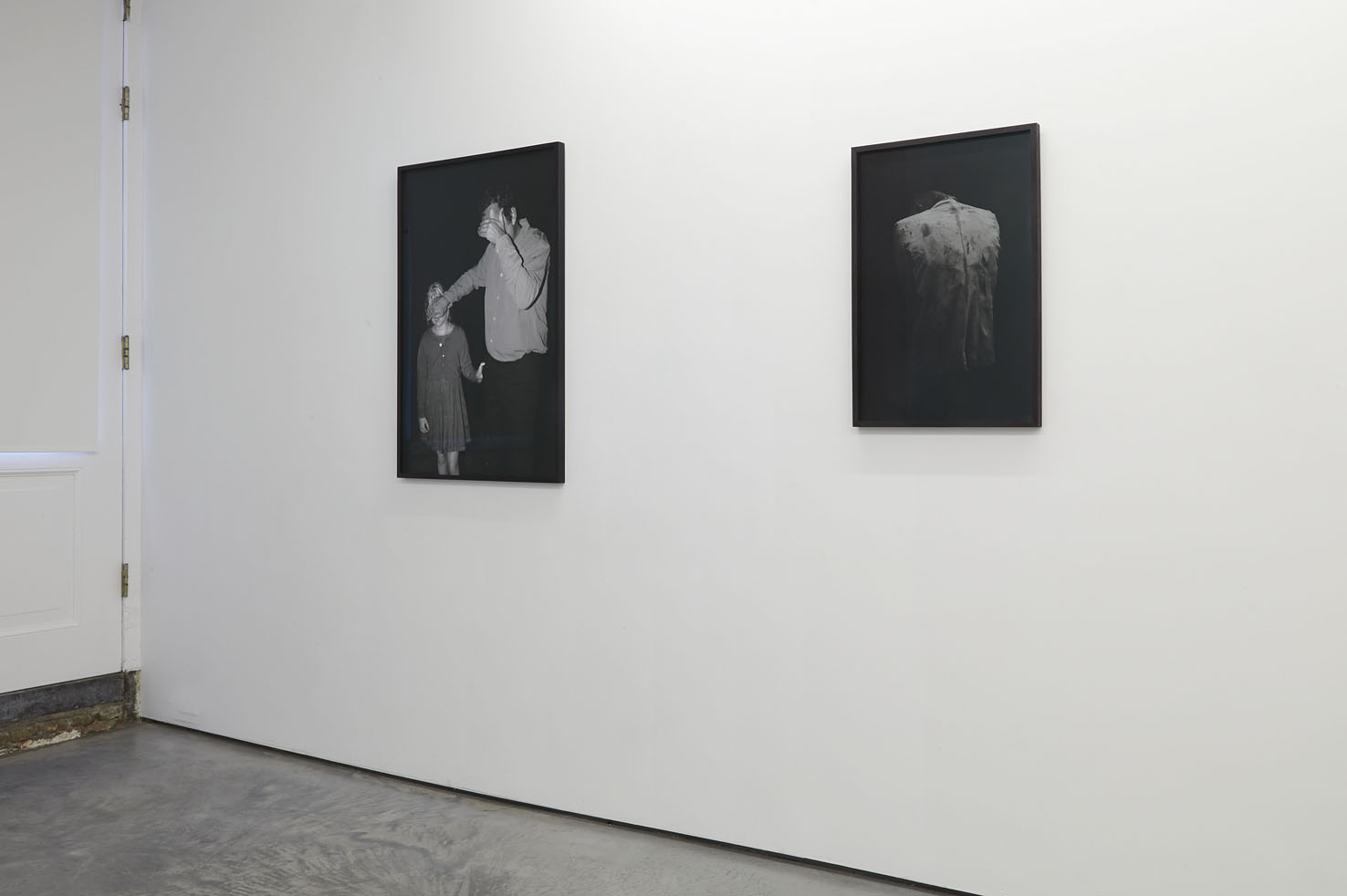 A black-and-white photograph of a young woman: her naked upper body in the center of the image, head tilted slightly forward, eyes closed. Her left shoulder is pulled up a bit, because she is being supported by a hand under her armpit. Placed on her right arm is another hand. The darkness that surrounds the woman like a physical presence hides our view of the figures holding the woman, but we recognize the one hand as being that of a man and the other as that of a woman.

What is being concealed from the eye here? What do we want to see? ‘Holding/Houding’ 2015, by the young Belgian artist Tom Callemin (1991, Ostend, Belgium) is a mysterious image that gives rise to associations with the painterly tradition of the Flemish Primitives and, to name an example, Rogier van der Weyden’s heartrending ‘Descent from the Cross’. The photograph’s emotional intensity is tranquil, inward. It is an image with a ‘gap’, a void in which the unfinished visual narrative seems to evaporate. The other works by Callemin that appear in the group exhibition ‘Early Spring’ are also marked by suggestion.

The title ‘Early Spring’ refers to the Japanese filmmaker Ozu’s blackand-white film of the same name, from 1956, about an office clerk who puts strain on the familiar routine of everyday life by having an extramarital affair. In the film there is use of the suggestive effect of omission, of leaps in time and gaps in the narrative structure. Indirectly the viewer is invited to fill those voids with his own projections.

In the work of Hamza Halloubi (1982, Tangier, Morocco) fictional and documentary elements are played out against each other. Image and (in most works) text lead their own separate lives, like two parallel worlds that defy each other, clash with each other or, on the contrary, keep each other at a distance. Existential dualism lies at the heart of this reality. The work in the exhibition, ’28 Seconds’, 2012, consists of a take which is twenty-eight seconds long. The camera is aimed at the face of a man whose gaze is directed downward; what he is looking at we cannot see. Only the essence remains, as the camera focuses on the relationship between the self and the other: Who am I? Who is the other? What effect does that have on my gaze? What is the meaning of the other’s gaze? When can we speak of an encounter, real contact? How do we interpret an image? And what part of ourselves do we project onto that image?

Chaim van Luit (1985, Heerlen) produced a series of monochrome paintings titled ‘Entartet’, 2015. When producing these paintings on raw linen, Van Luit went to the ‘Westwall’ bunkers around Aachen and in the Eiffel. There he scraped white lime pigments from the inside of the bunkers and mixed them with a water-based binder, in order to use that as pigment for his monochrome works. His point of departure for those paintings was the historical 1937 show of ‘Entartete Kunst’ in Munich, where 650 artworks were shown and labelled as ‘entartet’ (degenerate). Van Luit’s series resonates the connection between artistic production and a socio-political context. From the 650 historical examples Van Luit chose sixteen works and made copies of these works on the same scale as the originals. By painting the raw linen white, Van Luit makes a leap in time and creates a void, thereby erasing, as it were, the original works. The paintings evoke associations with innocence, while also raising the issue of dangerously discriminatory ideologies. In ‘Early Spring’ a number of works from the ‘Entartet’ series are presented in combination with a video in which the artist can be seen scraping the walls of the bunkers.

The work ‘Etui’, 2014, by Ana Navas (1984, Quito, Ecuador) consists of two parts: a bronze replica of ‘Bird in Space’, the famous sculpture by Brancusi, and a rug which, spread out on the floor, serves as a base for the sculpture and which proves, in its folded-up form, to be a travel case intended for transporting the bronze object. Navas employs various media such as video, performance, photography, sculpture and installations. In her work she focuses on subjects such as the study of cultural identity and structures in the public domain, while she also shows a fascination with language and the possibilities/impossibilities of communication, including the transposition of language into an image. Navas questions the way in which objects—whether they be ethnographic objects, artworks, design or everyday consumer goods— become assimilated into diverse realms. ‘Etui’ shows how the personal becomes intertwined with the universal.

‘I met her at the soft drink vending machine where I bought my daily coke to get through the afternoon. Since that day we never stopped talking and I saw her transform from grown up infant to diet specialist to gallery owner to mother to guru from the local hipster community.’ This is the lengthy title of the portrait drawn by Rinus Van de Velde (1981, Leuven, Belgium) for ‘Early Spring’. Van de Velde stages all of his images, turns his head into his house and his imagination into his life. His black-and-white drawings are representations of fiction that passes for reality. The long title of the work in the exhibition is short for a Van de Velde title: usually these are entire stories that suggest more than they actually tell, as is also the case with his drawings. And just as Ozu, in his ‘Early Spring’, discovers dramatic depths in the lives of ordinary people, Van de Velde likewise conjures forth the lives of his protagonists via brilliant details that shed light on the many aspects of their reality.