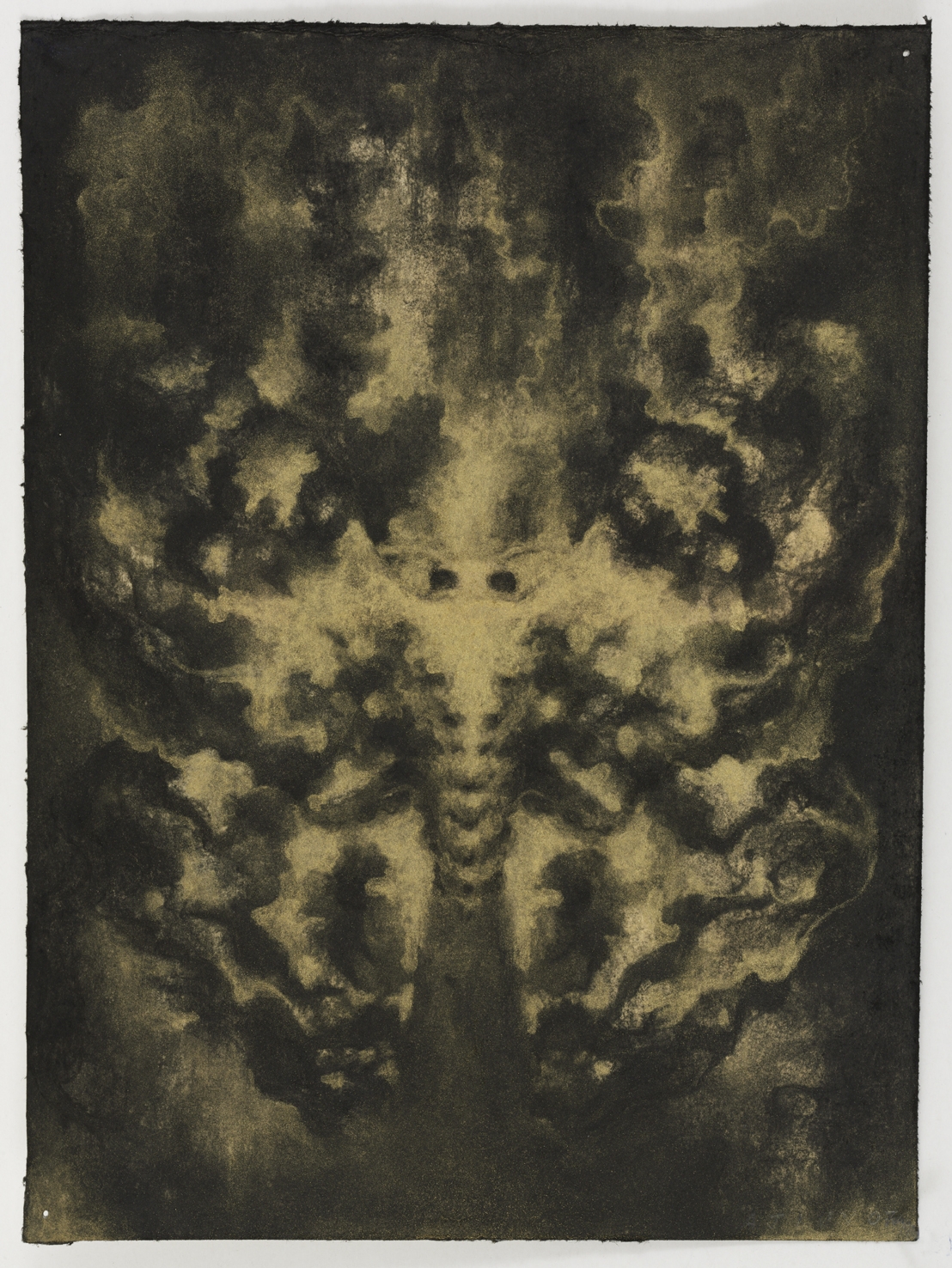 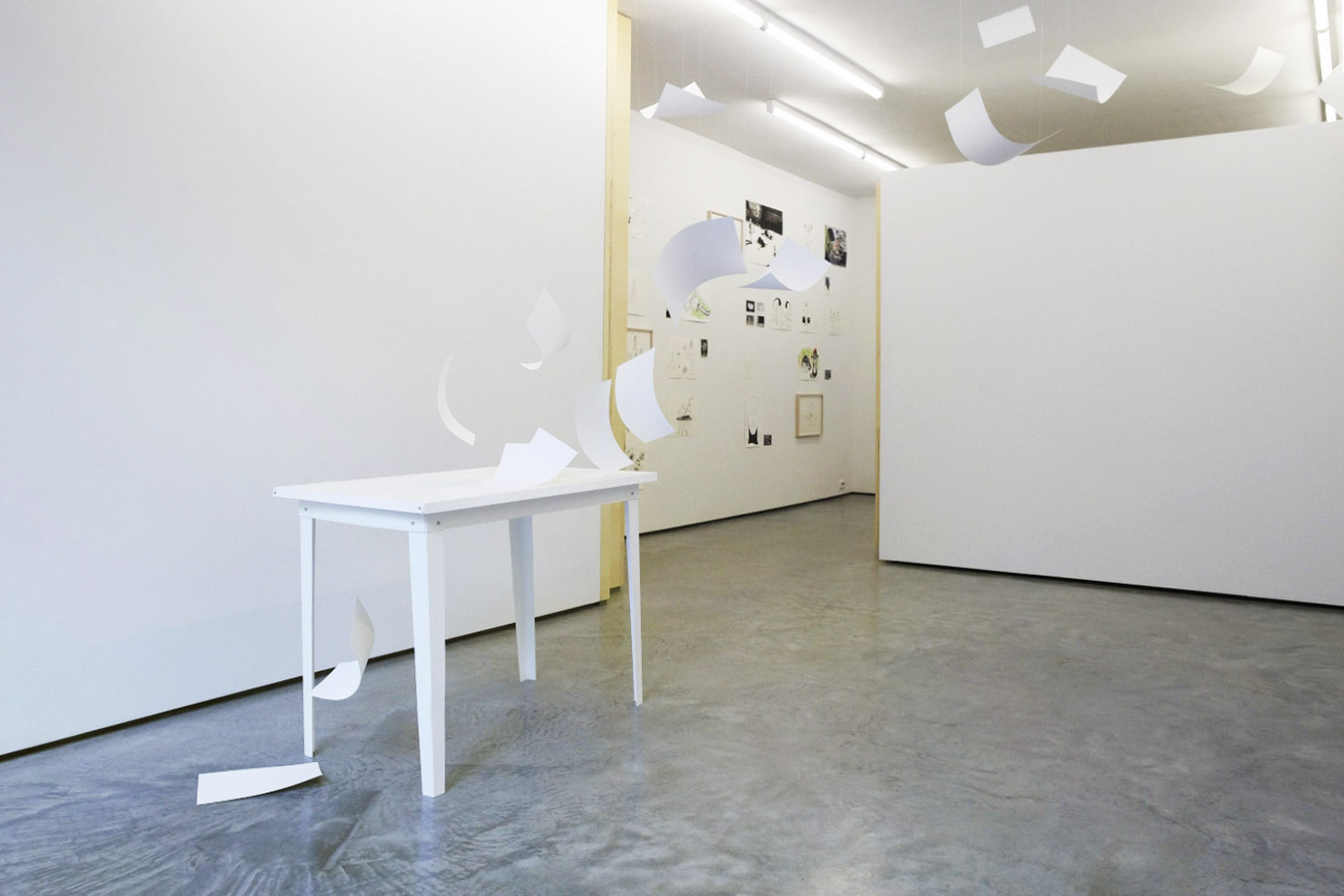 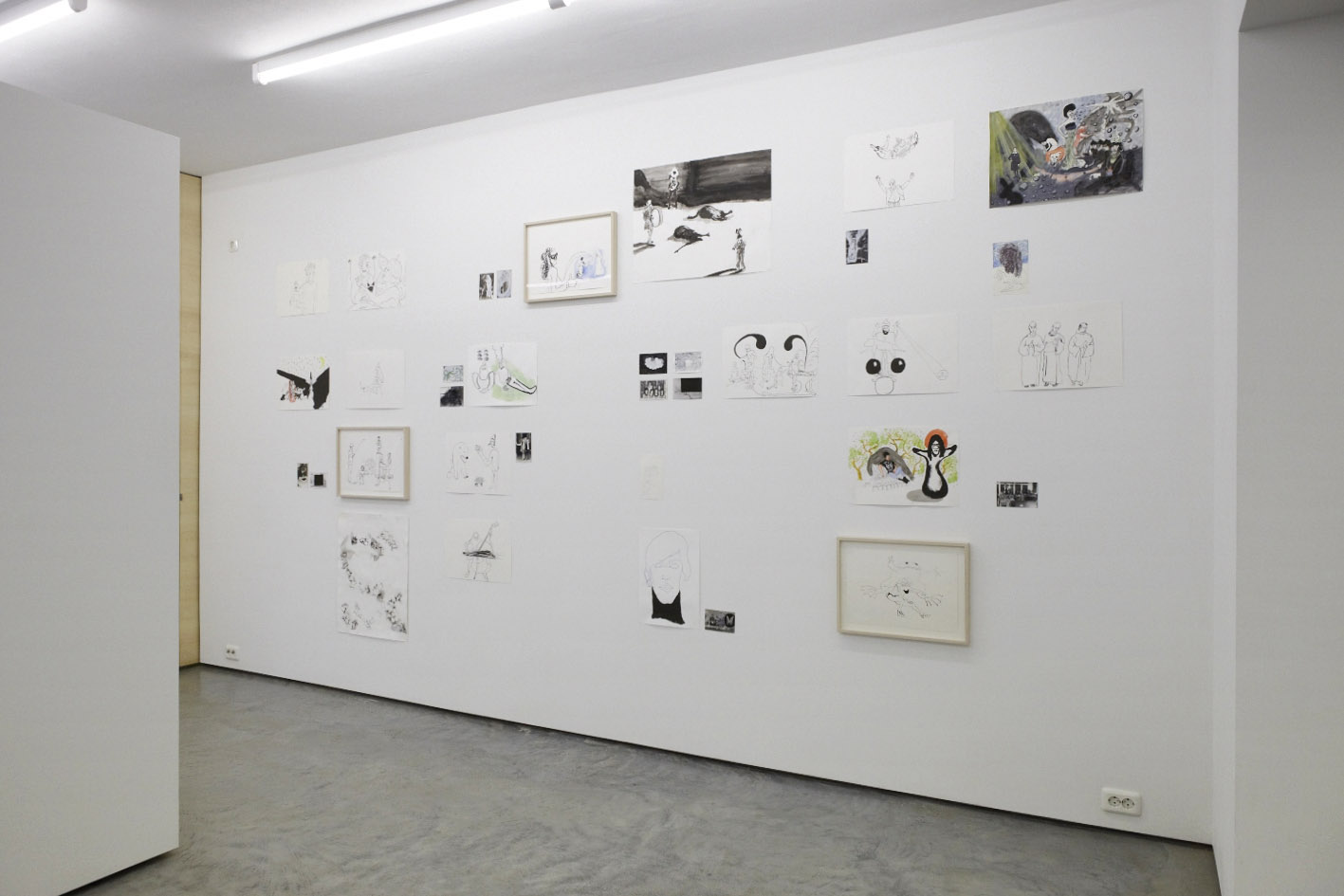 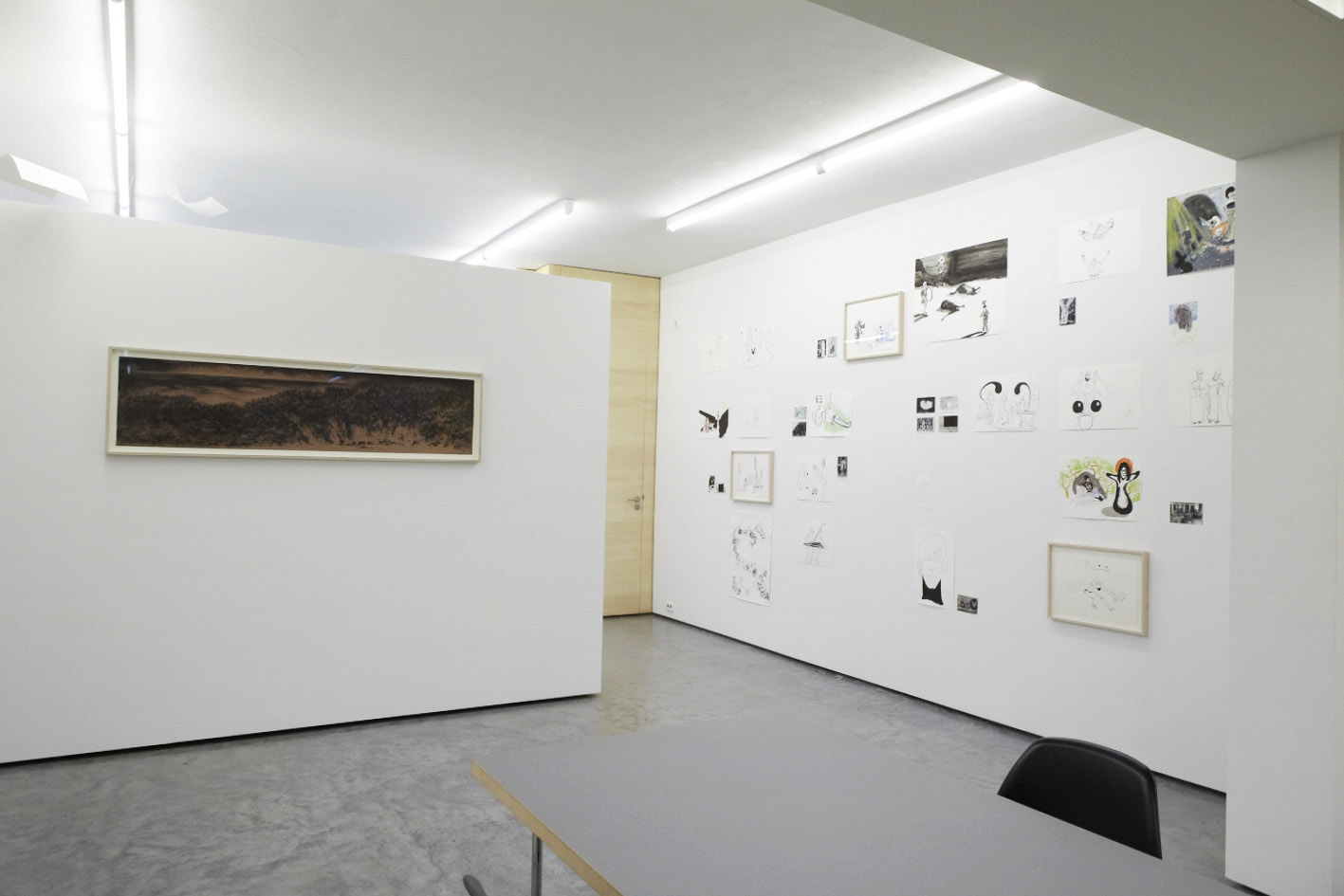 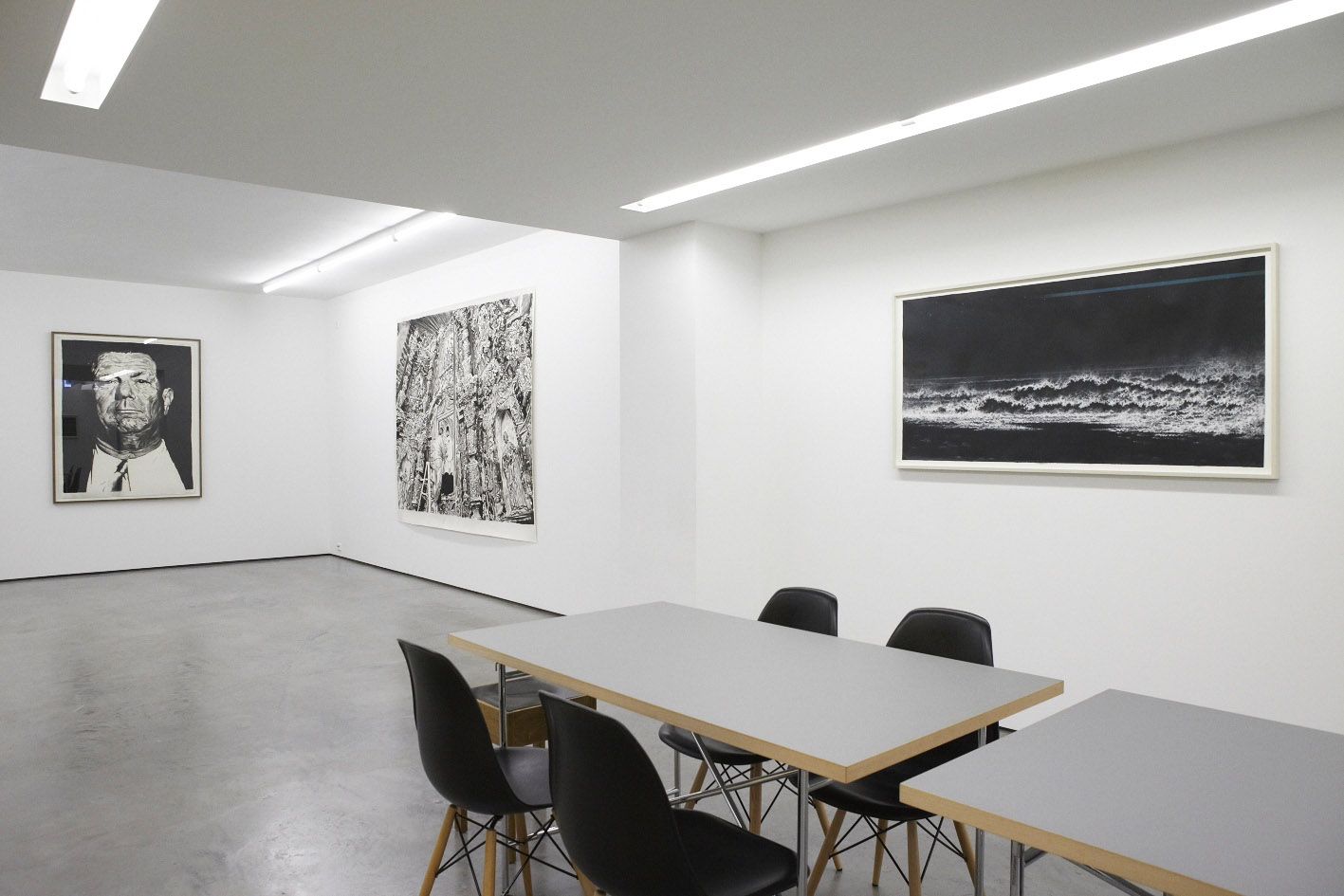 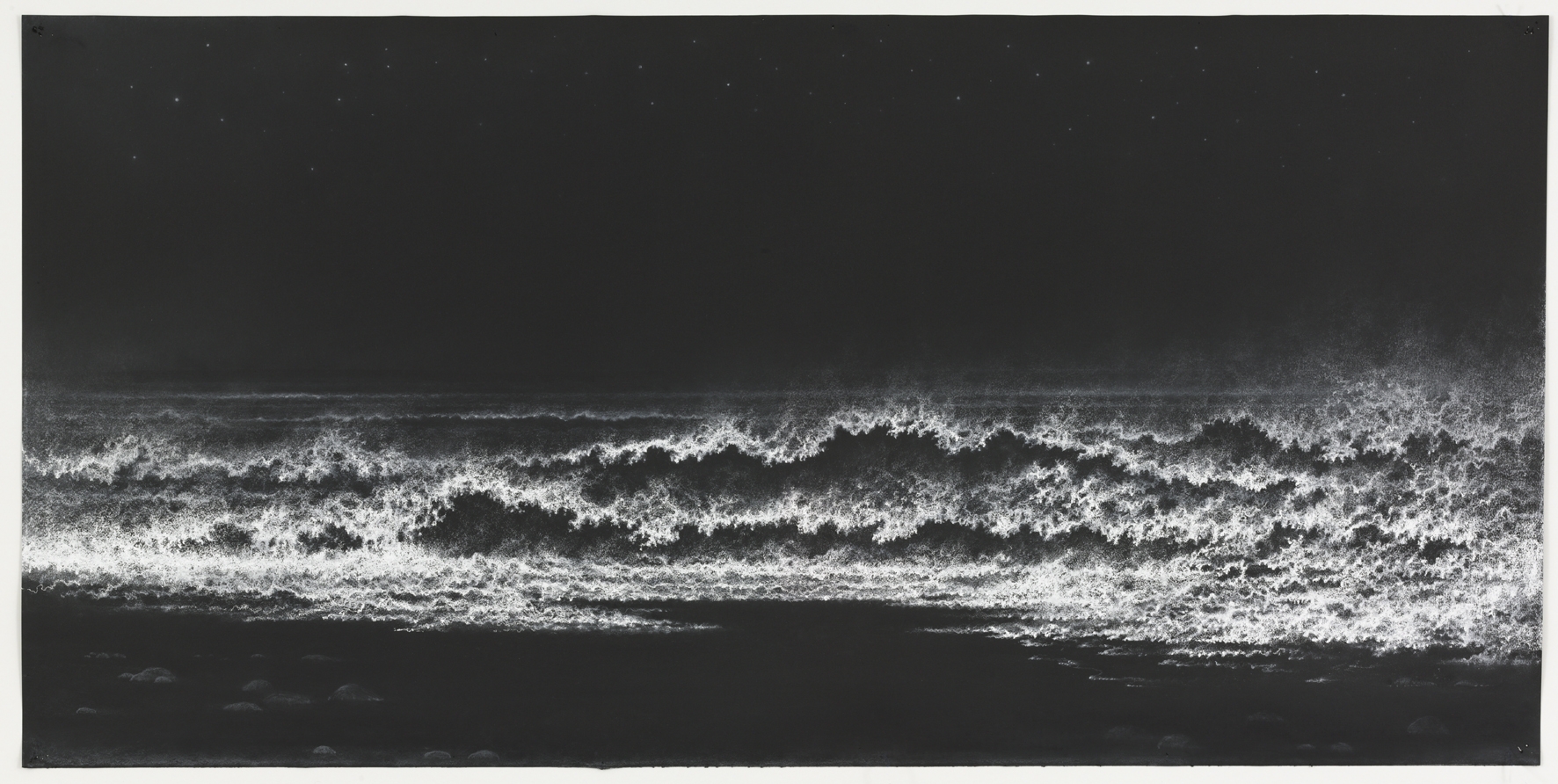 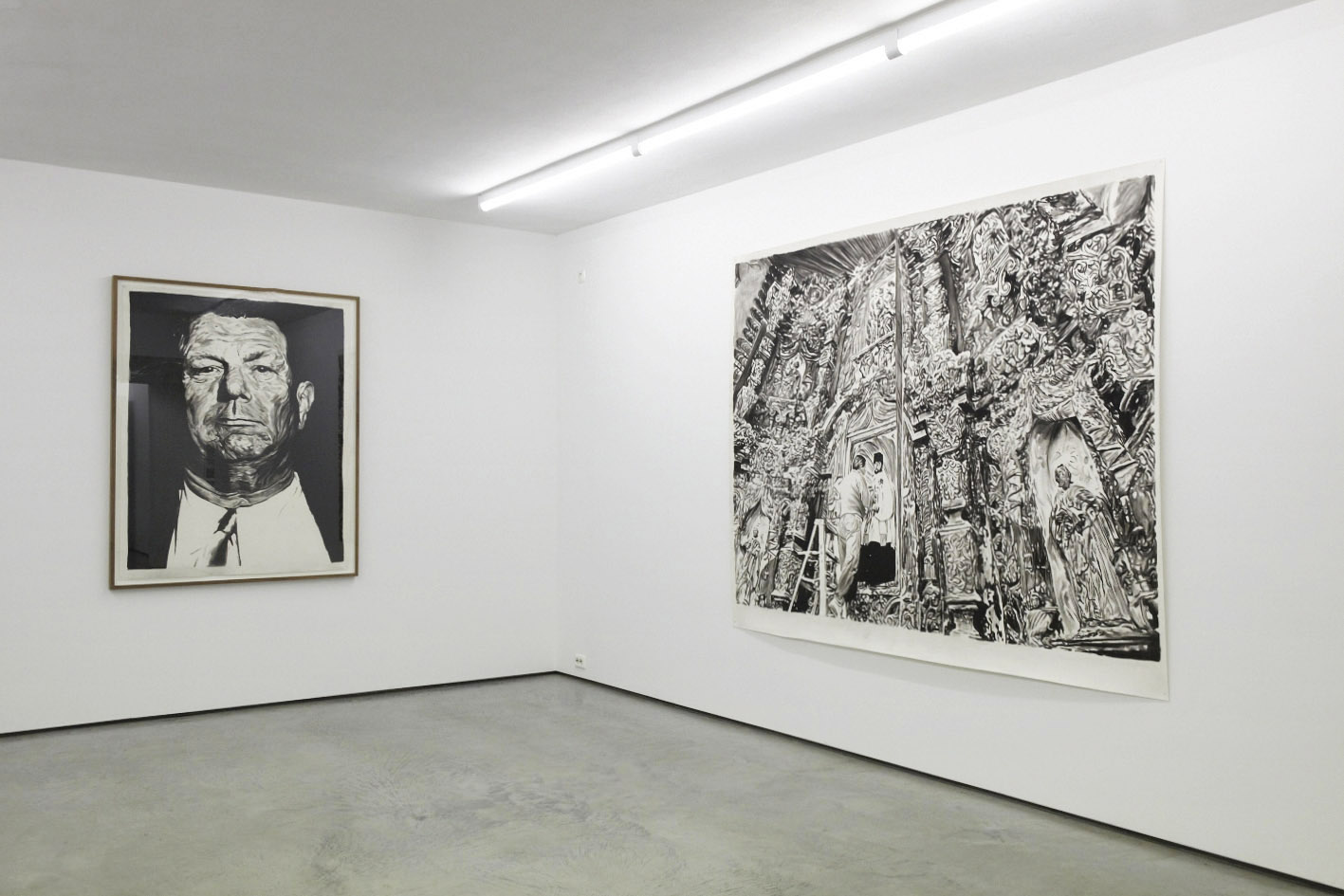 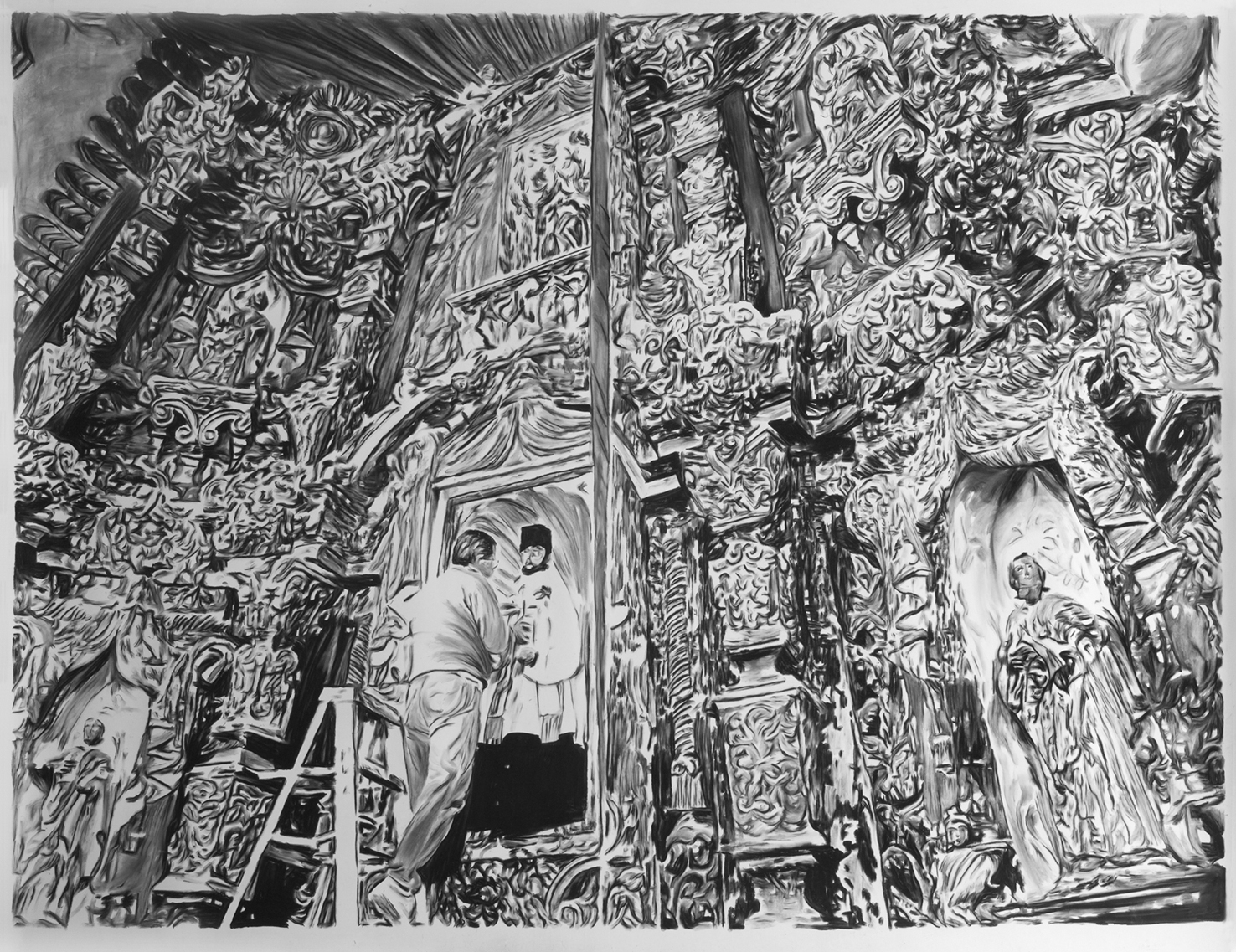 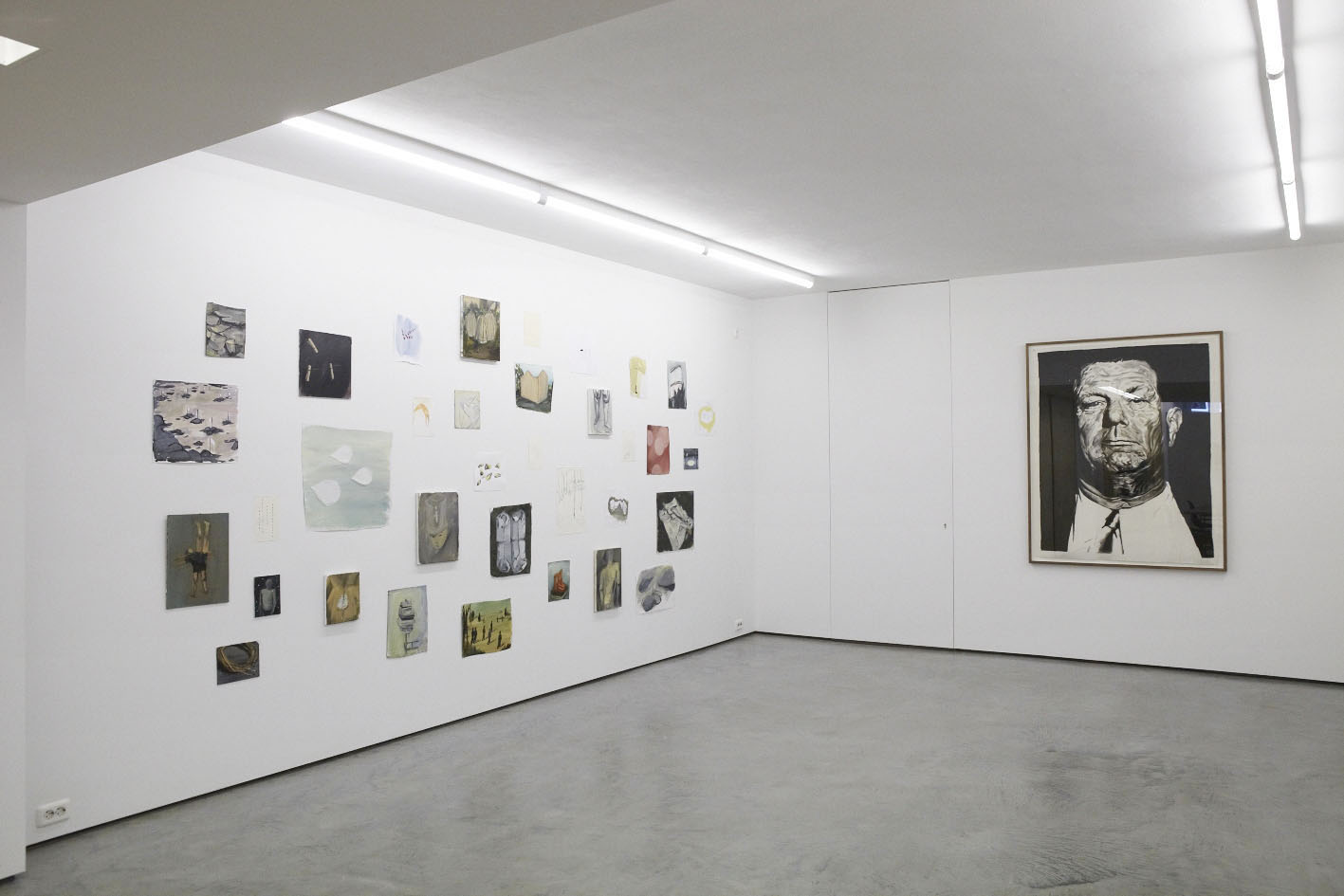 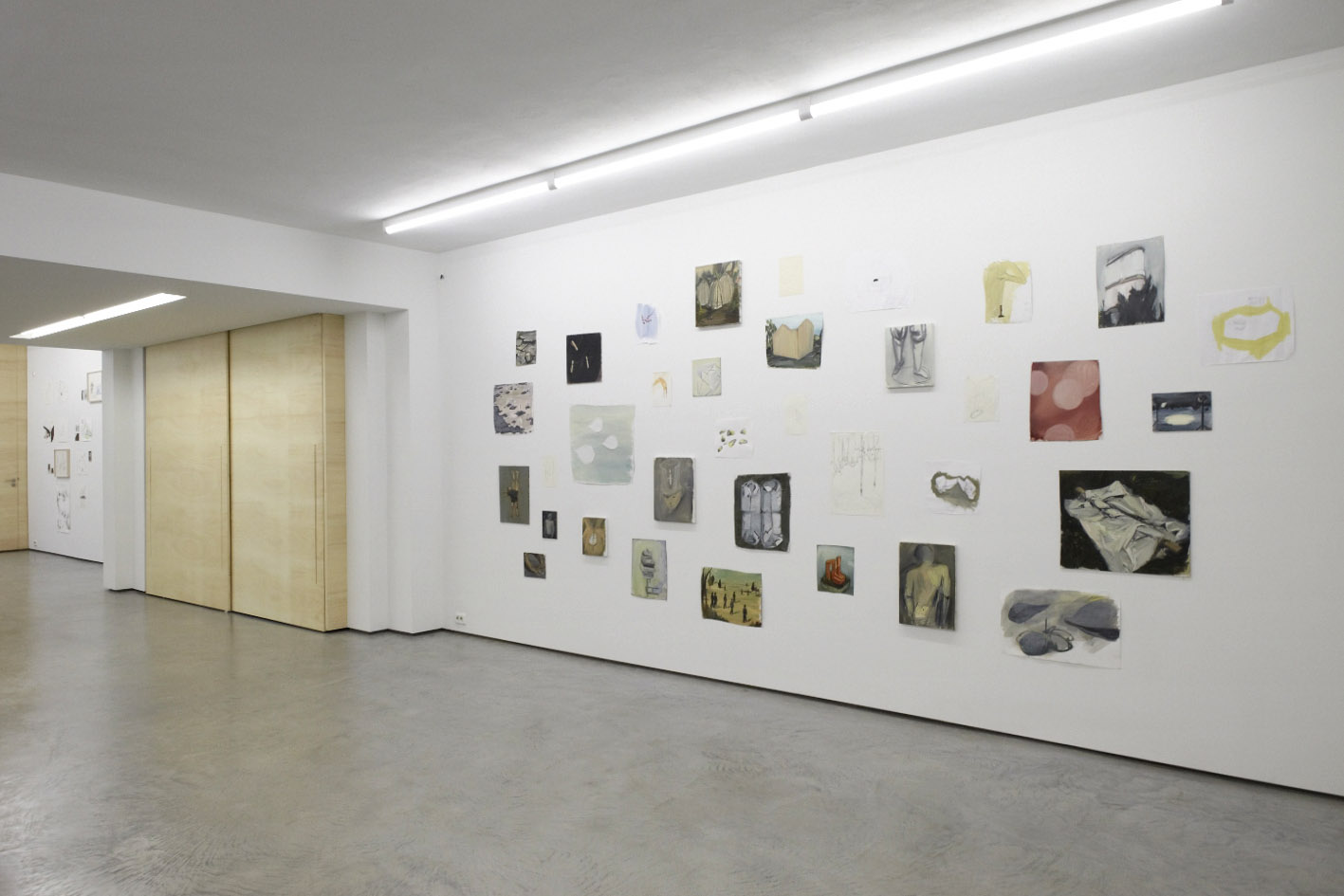 Classical myths tell us that visual art was ‘invented’ by a Corinthian girl whose hand, guided by Cupid, drew the outline of her sleeping lover’s shadow on the wall. Once the line was drawn, she filled up the surface with shading and then covered this, layer by layer, with color. In this story the drawing merely serves as a designation, the start of the actual masterpiece. That humble status was held by the drawing until the nineteenth century, when artists from the Romantic Movement commanded its autonomy via the sketch. In the twentieth century it became possible for a drawing, too, to be a masterpiece. The classical ideal of a final and complex work of art gave way to the notion of a fragmentary and personal interpretation of this, also in works on paper. The drawings shown in A Thin Line have been made with diverse materials; the exhibition even includes a site-specific installation. Whether the work involves a documentary approach, the portrayal of a fictitious world or perhaps the combination of extremes, the world of the drawing holds a wealth of perspectives that are interconnected by way of thin lines. The strength of the drawing lies with its capacity to transform not only the subject, but also the act of drawing itself. Following earlier presentations on video art and painting, for instance, A Thin Line is yet another exhibition at tegenboschvanvreden which adopts a stance according to antithetical viewpoints.

Rosa Everts (Groningen, 1986) heightens the tension between reality and fiction in her work. This is moreover evident in the piece that she shows in A Thin Line: a table (Untitled, 2010) on which papers seem to have just been swept up by a gust of wind. Through a classical play of illusion, Everts toys with the limits of the supports used in a medium such as drawing. In the past, for example, she exhibited drawings made on photographs of specific spaces; in these works she frequently experimented with three-dimensional elements. Rosa Everts’s table is a spatial work which, in turn, becomes a drawing due to the distinctly graphic elements in the installation. In her images Everts makes strategic use of the immediate recognition of universal elements which she imbues with a sense of melancholy and poetry.

Witte van Hulzen (Bolsward, 1984) employs drawing as a means of exploring staged interactions between people and placing them in visual contexts. His drawings are quick, playful, often absurdist in their tone, but also poetic and dream-like. The works are, for the most part, small in size and refer directly to other projects, such as the performances and films (previously shown in the gallery) that he produced together with Sander Breure. For Witte, the process of drawing is a way to ‘think aloud’ in images; he creates theatrical scenes in which images can be sharpened. The selection being shown in the gallery comes from various series of work. A striking aspect of drawings by Sanne Rous (Apeldoorn, 1984) is that they initially served the classical, subordinate role of the preparatory sketch. By their sheer power of persuasion, however, those drawings—often carried out in painterly strokes on paper, on occasionally plasticized cardboard, on wood or MDF—gradually won autonomous value. Rous frequently bases her work on stories that she has heard, or things that she has seen and for which she then intuitively seeks images via magazines or the Internet. This is how she creates both connotative and formal stratification in her drawings of landscapes, objects and people, while her work nonetheless comes across with overwhelming directness. Sanne Rous contemplates the people and things surrounding her with an eye that betrays a particular fascination with the human condition.

All of the work by Rinus Van de Velde (Antwerp, Belgium, 1983) is based on images from his personal archive. This documentary point of departure results in a monumental merging of reality and imagination. It relies on the language of media such as film and photography. The fact that the essence of drawing lies in transformation can be seen in the work being presented by Van de Velde in A Thin Line: a drawing (1.90 x 2.40 cm) in chalk and charcoal, showing the facade of a cathedral and, at its entrance, a man on a ladder who seems to be cleaning one of the statues in the niches. When seen from a distance, the drawing seems to comprise an abstract, black-and-white structure of gothic ornamentation and scrolling. Those who take a closer look will begin to see figures and faces emerging everywhere, and even more ornamentation and elegant lines. The figure on the ladder gives rise to a kind of mirror effect, in which the positions of the maker and the viewer, of fact and fiction are played out against each other.

Diametrically opposed to the work of Van de Velde is that of Aji V.N. (Kerala, India, 1968). In his drawings, now being shown for the first time at tegenboschvanvreden, any trace of a documentary element, any trace of experimentation, is missing: Aji V.N. responds, as it were, solely to his hand. The artist allows his images to develop step by step in an extremely slow, both focused and associative process. His drawings consist of charcoal and watercolor on colored paper, and in his technique the eraser plays just as important a role as the drawn line. Whether they be landscape figures or human figures, whether the references involve his homeland India or a vast Dutch horizon with sky and clouds above it, whether or not exotic figures appear in his work, his drawings are essentially ‘free’ of any literal reference and thereby highly abstract as archetypes. This allows Aji V.N. to establish connections between the past and the present, between continents, between details and larger structures, between contours and surfaces.